From Infogalactic: the planetary knowledge core
Jump to: navigation, search
This article is about the track and field athlete. For the baseball player, see Félix Sánchez (baseball).

Félix Sánchez, (born August 30, 1977) is an American track and field athlete of Dominican descent who competes for the Dominican Republic. He specializes in the 400 meter hurdles event, where he is the reigning Olympic champion. He is a two-time Olympic gold medallist, having won the titles in 2004 and 2012. He was also world champion in 2001 and 2003. Just before turning 36, he set the Masters M35 World Record at 48.10. Sanchez has acquired many nicknames: "Super Felix," "the Invincible," "Superman," and "the Dictator."[1]

The Félix Sánchez Olympic Stadium, the Dominican Republic’s largest stadium, is named after him. 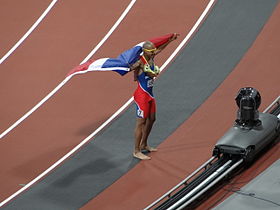 Sánchez at the 2012 London Olympics

Sánchez opted to represent the Dominican Republic internationally, and made his debut for that nation in the Pan American games in 1999.[5] Between 2001 and 2004 he won 43 races in a row[5] at 400 m hurdles, including the 2001 and 2003 World Championships. He won a share of the Golden League million dollar-jackpot in 2002 after winning all 7 races.[6]

At the 2003 Pan American Games, Sánchez won the Dominican Republic's first gold medal at the competition and also broke the Pan American Games record in the 400 m hurdles.[7][8] He was named Track and Field News Track & Field Athlete of the Year in 2003. Subsequently, he won the first ever Olympic gold medal for the Dominican Republic on August 28, 2004 during the 2004 Summer Olympics in Athens, Greece.[9]

During his 43-race[5] winning streak, from 2001 to 2004, Sánchez was known for wearing a wristband while competing. The red flashing wristband, a souvenir from the 2000 Olympics, served as a motivation for him after failing to advance to the final in Sydney. After winning the Olympic gold medal in Athens 2004, Sánchez gave the wristband to the IAAF for auction and the profits were donated to charity.[5] In his first race after the Olympics – and his first race without the wristband – at the Van Damme Memorial meet in Brussels, Sánchez injured his leg and had to abandon the race halfway through.[10][11]

In 2012, at the age of 34, Sánchez entered the 2012 Summer Olympics. He posted the fastest qualifying time, and won the final with a time of 47.63 seconds,[12] the same as his winning time in Athens in 2004 and his fastest run for eight years.[13] Sánchez became the oldest man to win the Olympic 400m hurdles title.[13] He was the only Olympic medalist for the Dominican Republic until 45 minutes after his second gold medal, when Luguelín Santos picked up a silver medal in the 400 metres. For his performance in London Sanchez was awarded the Laureus World Comeback of the Year.[14]