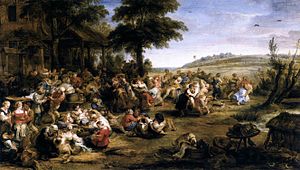 A fête or fete is an elaborate festival, party or celebration.[1] In Britain, fetes are traditional public festivals, held outdoors and organized to raise funds for a charity. They typically include entertainment and the sale of goods and refreshments.[2] 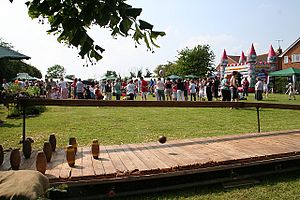 Village fêtes are common in Britain. These are usually outdoor shows held on village greens or recreation grounds with a variety of activities. They are organised by an ad hoc committee of volunteers from organisations like religious groups or residents' associations. In Australia, fêtes are often held yearly by schools and sometimes churches to raise funds.

Attractions seen at village fêtes include tombolas, raffles, coconut shies, bat a rat stalls, white elephant stalls, cakes, and home produce such as jams and pickles. Entertainment may include Morris dancing, tug of war, fancy dress and pet shows. The American and Canadian equivalent would be a county or city fair.

Harvard University's Eliot House uses the term to refer to its spring formal. In Trinidad and Tobago and other English-speaking Caribbean territories, fêtes are huge parties held during the Carnival season. Bloomington, Minnesota's, Independence Day celebration (traditionally held on the 3rd of July) has been known as Summer Fete since 1978.