From Infogalactic: the planetary knowledge core
Jump to: navigation, search
This article is about the German title. For other uses, see Führer (disambiguation).

Führer (German pronunciation: [ˈfyːʁɐ], spelled Fuehrer when the umlaut is not available) is a German title meaning leader or guide now most associated with Adolf Hitler. The word Führer in the sense of guide remains common in German, but because of its strong association with Nazi Germany, it comes with some stigma and negative connotations when used with the meaning of leader. The word Leiter is therefore used instead.

Origin of the title and its use as party leader

Führer was the unique name granted by Hitler to himself, in his function as Vorsitzender (chairman) of the Nazi Party. It was at the time common to refer to party leaders as "Führer", with an addition to indicate the leader of which party was meant. Hitler's adoption of the title was partly inspired by its earlier use by the Austrian Georg von Schönerer, a major exponent of pan-Germanism and German nationalism in Austria, whose followers also commonly referred to him as the Führer without qualification, and who also used the Sieg Heil-salute.[3] Hitler's choice for this political epithet was unprecedented in Germany. Like much of the early symbolism of Nazi Germany, it was modeled after Benito Mussolini's Italian Fascism. Mussolini's chosen epithet il Duce or "Dux" in Latin ('the Leader') was widely used, though, unlike Hitler, he never made it his official title. The Italian word Duce (unlike the German word Führer) is no longer used as a generic term for a leader, but almost always refers to Mussolini himself.

Hitler saw himself as the sole source of power in Germany, similar to the Roman emperors and German medieval leaders.[4] After the death of Paul Hindenburg in 1934, the Badonviller Marsch as well as the Personal standard of Adolf Hitler were used to evocate the presence of Hitler as leader and personification of the German state.[5]

As a political office

After Hitler's appointment as Reichskanzler (Chancellor of the Reich) the Reichstag passed the Enabling Act which allowed Hitler's cabinet to promulgate laws by decree.

One day before the death of Reichspräsident Paul von Hindenburg, Hitler and his cabinet decreed a law that merged the office of the president with that of Chancellor.[6] Hitler therefore assumed the President's powers without assuming the office itself – ostensibly out of respect for Hindenburg's achievements as a heroic figure in World War I. Though this law was in breach of the Enabling Act, which specifically precluded any laws concerning the Presidential office, it was approved by a referendum on 19 August.[1][2][7]

Hitler used the title Führer und Reichskanzler ("Leader and Chancellor"), highlighting the positions he already held in party and government, though in popular reception, the element Führer was increasingly understood not just in reference to the Nazi party but also in reference to the German people and the German state. Soldiers had to swear allegiance to Hitler as "Führer des deutschen Reiches und Volkes" (Leader of the German Reich and People) The title was changed on July 28, 1942 to "Führer des Großdeutschen Reiches" ("Leader of the Greater German Empire"). In his political testament, Hitler also refers to himself as Führer der Nation.[8]

One of the Nazis' most-repeated political slogans was Ein Volk, ein Reich, ein Führer – "One People, One Empire, One Leader". Bendersky says the slogan "left an indelible mark on the minds of most Germans who lived through the Nazi years. It appeared on countless posters and in publications; it was heard constantly in radio broadcasts and speeches." The slogan emphasized the absolute control of the party over practically every sector of German society and culture – with the churches the most notable exception. Hitler's word was absolute, but he had a narrow range of interest – mostly involving diplomacy and the military – and so his subordinates interpreted his will to fit their own interests.[10]

According to the Constitution of Weimar, the President was Supreme Commander of the Armed Forces. Unlike “President”, Hitler did take this title (Oberbefehlshaber) for himself. When conscription was reintroduced in 1935, Hitler created the title of Commander-in-Chief of the Armed Forces, a post held by the Minister for War. He retained the title of Supreme Commander for himself. Field Marshal Werner von Blomberg, then the Minister of War and one of those who created the Hitler oath, or the personal oath of loyalty of the military to Hitler became the Commander-in-Chief of the Armed Forces while Hitler remained Supreme Commander. Following the Blomberg–Fritsch Affair in 1938, Hitler assumed the commander-in-chief's post as well and took personal command of the armed forces. However, he continued using the older formally higher title of Supreme Commander, which was thus filled with a somewhat new meaning. Combining it with "Führer", he used the style Führer und Oberster Befehlshaber der Wehrmacht ("Leader and Supreme Commander of the Wehrmacht"), yet a simple "Führer" since May 1942. 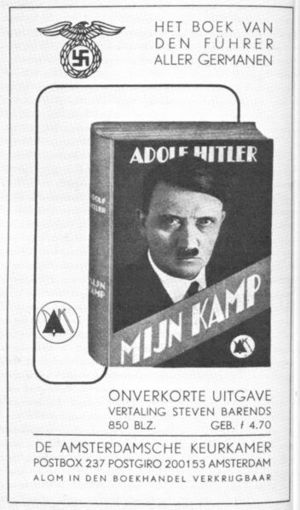 Advertisement for the Dutch translation of Mein Kampf. Hitler is referred to as "the Führer of all Germanics"

An additional title was adopted by Hitler on 23 June 1941, declaring himself the "Germanic Führer" (germanischer Führer) in addition to his duties as Führer of the German state and people.[11] This was done to emphasize Hitler's professed leadership of what the Nazis described as the "Nordic-Germanic master race", which peoples such as the Norwegians, Danes, Swedes, and Dutch, etc. were considered members of in addition to the Germans, and the intent to submerge these countries into Nazi Germany. Waffen-SS formations from these countries had to declare obedience to Hitler by addressing him in this fashion.[12] On 12 December 1941 the Dutch fascist Anton Mussert also addressed him as such when he proclaimed his allegiance to Hitler during a visit to the Reich Chancellery in Berlin.[13] He had wanted to address Hitler as Führer aller Germanen ("Führer of all Germanics"), but Hitler personally decreed the former style.[13] Historian Loe de Jong speculates on the difference between the two: Führer aller Germanen implied a position separate from Hitler's role as Führer und Reichskanzler des Grossdeutschen Reiches ("Führer and Reich Chancellor of the Greater German Empire"), while germanischer Führer served more as an attribute of that main function.[13] As late as 1944, however, occasional propaganda publications continued to refer to him by this unofficial title as well.[14]

Military usage outside of Hitler

Führer has been used as a military title (compare Latin Dux) in Germany since at least the 18th century. The usage of the term "Führer" in the context of a company-sized military subunit in the German Army referred to a commander lacking the qualifications for permanent command. For example, the commanding officer of a company was (and is) titled "Kompaniechef" (literally, Company Chief), but if he did not have the requisite rank or experience, or was only temporarily assigned to command, he was officially titled "Kompanieführer". Thus operational commands of various military echelons were typically referred to by their formation title followed by the title Führer, in connection with mission-type tactics used by the German military forces. The term Führer was also used at lower levels, regardless of experience or rank; for example, a Gruppenführer was the leader of a squad of infantry (9 or 10 men).

Under the Nazis, the title Führer was also used in paramilitary titles (see Freikorps). Almost every Nazi paramilitary organization, in particular the SS and SA, had Nazi party paramilitary ranks incorporating the title of Führer. The SS including the Waffen-SS, like all paramilitary Nazi organisations, called all their members of any degree except the lowest Führer of something; thus confusingly, "Gruppenführer" was also an official rank title for a specific grade of general. The word Truppenführer was also a generic word referring to any commander or leader of troops, and could be applied to NCOs or officers at many different levels of command.

In Germany, the isolated word Führer is usually avoided in political contexts, due to its intimate connection with Nazi institutions and with Hitler personally.

The use of alternate terms like "Chef" (a borrowing from the French, as is the English "chief", e.g. Chef des Bundeskanzleramtes) or Leiter, (often in compound words like Amtsleiter, Projektleiter or Referatsleiter) is usually not the result of replacing of the word "Führer", but rather using terminology that existed before the Nazis. The use of Führer to refer to a political party leader is rare today and Vorsitzender (chairman) is the more common term. However, the word Oppositionsführer ("leader of the (parliamentary) opposition") is more commonly used.

The dictionary definition of Führer at Wiktionary