listen) (German for "leader principle") prescribed the fundamental basis of political authority in the governmental structures of the Third Reich. This principle can be most succinctly understood to mean that "the Führer's word is above all written law" and that governmental policies, decisions, and offices ought to work toward the realization of this end.[1] In actual political usage, it refers mainly to the practice of dictatorship within the ranks of a political party itself, and as such, it has become an earmark of political Fascism.

The Führerprinzip was not invented by the Nazis. Hermann Graf Keyserling, an ethnically German philosopher from Estonia, was the first to use the term Führerprinzip. One of Keyserling's central claims was that certain "gifted individuals" were "born to rule" on the basis of Social Darwinism.

The ideology of the Führerprinzip sees each organization as a hierarchy of leaders, where every leader (Führer, in German) has absolute responsibility in his own area, demands absolute obedience from those below him and answers only to his superiors.[2] This required obedience and loyalty even over concerns of right and wrong.[2] The supreme leader, Adolf Hitler, answered to God and the German people. Italian philosopher Giorgio Agamben has argued[citation needed] that Hitler saw himself as an incarnation of auctoritas, and as the living law or highest law itself, effectively combining in his persona executive power, judicial power and legislative power. After the campaign against the alleged Röhm Putsch, Hitler declared: "in this hour, I was responsible for the fate of the German nation and was therefore the supreme judge of the German people!"[3]

The Führerprinzip paralleled the functionality of military organizations, which continue to use a similar authority structure today, although in democratic countries members are supposed to be restrained by codes of conduct. The justification for the civil use of the Führerprinzip was that unquestioning obedience to superiors supposedly produced order and prosperity in which those deemed 'worthy' would share.

This began as soon as the Beer Hall Putsch; Hitler used his trial for propaganda to present himself, claiming it had been his sole responsibility and inspiring the title Führer.[4]

This principle became the law[citation needed] of the National Socialist German Worker's Party (Nazi Party) and the SS and was later transferred to the whole German society once the Nazis took power. Appointed mayors replaced elected local governments. Schools lost elected parents' councils and faculty advisory boards, with all authority being put in the headmaster's hands.[5] The Nazis suppressed associations and unions with elected leaders, putting in their place mandatory associations with appointed leaders. The authorities allowed private corporations to keep their internal organization, but with a simple renaming from hierarchy to Führerprinzip. Shop stewards had their authority carefully circumscribed to prevent their infringing on that of the plant leader.[6] Eventually, virtually no activity or organization in Germany could exist that was completely independent of party and/or state leadership.

In practice, the selection of unsuitable candidates often led to micromanagement and commonly to an inability to formulate coherent policy. Albert Speer noted that many Nazi officials dreaded making decisions in Hitler's absence. Rules tended to become oral rather than written; leaders with initiative who flouted regulations and carved out their own spheres of influence might receive praise and promotion rather than censure.

Many propaganda films developed the importance of the Führerprinzip. Flüchtlinge depicted Volga German refugees saved from Communist persecution by a leader demanding unquestioning obedience.[7] Der Herrscher altered its source material to depict its hero, Clausen, as the unwavering leader of his munitions firm, who, faced with his children's machinations, disowns them and bestows the firm on the state, confident that a worker will arise capable of continuing his work and, as a true leader, needing no instruction.[8] Carl Peters shows the title character in firm, decisive action to hold and win African colonies, but brought down by a parliament that does not realize the necessity of Führerprinzip.[9]

In the schools, adolescent boys were presented with Nordic sagas as the illustration of Führerprinzip, which was developed with such heroes as Frederick the Great and Prince Otto Von Bismarck.[10]

This combined with the glorification of the one, central Führer. During the Night of Long Knives, it was claimed that his decisive action saved Germany,[11] though it meant (in Goebbels's description) suffering "tragic loneliness" from being a Siegfried forced to shed blood to preserve Germany.[12] In one speech Robert Ley explicitly proclaimed "The Führer is always right."[13] Booklets given out for the Winter Relief donations included The Führer Makes History,[14][15] a collection of Hitler photographs,[16] and The Führer’s Battle in the East.[17] Films such as Der Marsch zum Führer and Triumph of the Will glorified him.

Carl Schmitt—drawn to the Nazi party by his admiration for a decisive leader—[18] praised him in his pamphlet State, Volk and Movement because only the ruthless will of such a leader could save Germany and its people from the "asphalt culture" of modernity, to bring about unity and authenticity.[19] 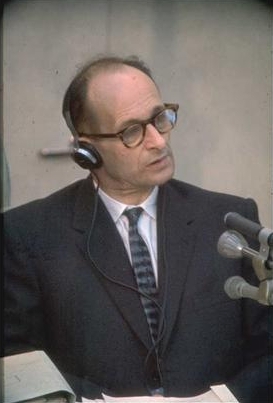 Adolf Eichmann on trial in 1961

During the post-war Nuremberg Trials, Nazi war criminals—and, later, Adolf Eichmann during the trial in Israel—used the Führerprinzip concept to argue that they were not guilty of war crimes by claiming that they were only following orders. Eichmann may have declared his conscience was inconvenienced by war events in order to "do his job" as best he could.

In Eichmann in Jerusalem, Hannah Arendt concluded that, aside from a desire for improving his career, Eichmann showed no trace of anti-Semitism or psychological abnormalities whatsoever. She called him the embodiment of the "banality of evil", as he appeared at his trial to have an ordinary and common personality, displaying neither guilt nor hatred, denying any form of responsibility. Eichmann argued he was simply "doing his job" and maintained he had always tried to act in accordance with Kant's categorical imperative. Arendt suggested that these statements most strikingly discredit the idea that Nazi criminals were manifestly psychopathic and different from common people, that even the most ordinary of people can commit horrendous crimes if placed in the catalyzing situation, and given the correct incentives. However, Arendt disagreed with this interpretation, as Eichmann justified himself with the Führerprinzip. Arendt argued that children obey, whereas adults adhere to an ideology.