Frederick William Pomeroy RA (London 1856 – 26 May 1924) was a prolific British sculptor of architectural and monumental works. He was one of the so-called New Sculptors identified by Edmund Gosse in 1894 – a group distinguished by a stylistic turn towards naturalism and their work in architectural sculpture. 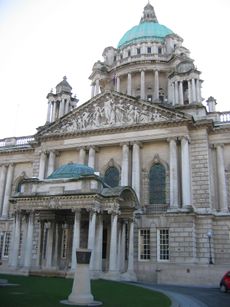 He was born in London, the son of an artist-craftsman. He trained with William Silver Frith at the South London Technical School of Art (Formerly Lambeth School of Art and now the City and Guilds of London Art School[1]), where he was also taught by Jules Dalou. In 1880, he was able to enter the Royal Academy Schools, where he won a travelling scholarship; which took him to Paris (where he studied under Antonin Mercié) and Italy. He was elected ARA in 1906, and RA in 1917.

On returning to London Pomeroy carved Frederic Leighton's marble group, Athlete wrestling with a python (Private collection). In 1887 he joined the Art Workers Guild, and from 1888 he exhibited with the Arts and Crafts Exhibition Society (in 1907 he became master of the Art Workers Guild). He became a leading sculptor in the New Sculpture movement, both in London and elsewhere in Britain. His work in London includes the figure of Justice above the Central Criminal Court (Old Bailey) and the statue of W. E. Gladstone in the Houses of Parliament.

Pomeroy's largest outdoor works are the four enormous bronze figures on the upstream side of Vauxhall Bridge in London. Dating from 1907, they represent: Pottery, Engineering, Architecture and Agriculture. Pomeroy's other architectural sculpture includes:

In 1913 Pomeroy married Patricia Morrison Coughlan, of Douglas, County Cork. With her he had two sons.[5]

In May 1924 Pomeroy offered a prize "for the most perfect pair of feet", with the result that the actress Daisy Burrell and the dancer Margery Prince tied for the first prize of £50.[6] Pomeroy died on 26 May.[7]