The first trophy, originally named Victory, but later renamed in honour of former FIFA president Jules Rimet, was made of gold plated sterling silver and lapis lazuli and depicted Nike, the Greek goddess of victory. Brazil won the trophy outright in 1970, prompting the commissioning of a replacement. The Jules Rimet Trophy was stolen in 1983 and never recovered.

The subsequent trophy, called the "FIFA World Cup Trophy", was introduced in 1974. Made of 18 karat gold with a malachite base, it stands 36.8 centimeters high and weighs 6.1 kilograms.[1] The trophy was made by Stabilimento Artistico Bertoni company in Italy. It depicts two human figures holding up the Earth. In the 2010 World Cup Finals, held in South Africa between the Netherlands and Spain, a fan ran onto the pitch and attempted to steal the trophy before he was stopped by officials. The current holder of the trophy is Germany, winner of the 2014 World Cup. 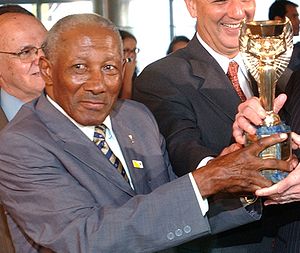 Djalma Santos, Brazilian World Cup winner in 1958, with the replica of the stolen trophy

The Jules Rimet Trophy was the original prize for winning the Football World Cup. Originally called "Victory", but generally known simply as the World Cup or Coupe du Monde, it was officially renamed in 1946 to honour the FIFA President Jules Rimet who in 1929 passed a vote to initiate the competition. It was designed by Abel Lafleur and made of gold-plated sterling silver on a white/yellow marble base. In 1954 this base was replaced with a high base made of lapis lazuli. It stood 35 centimetres (14 in) high and weighed 3.8 kilograms (8.4 lb).[2] It comprised a decagonal cup, supported by a winged figure representing Nike, the ancient Greek goddess of victory. The Jules Rimet Trophy was taken to Uruguay for the first FIFA World Cup aboard the Conte Verde, which set sail from Villefranche-sur-Mer, just southeast of Nice, on 21 June 1930. This was the same ship that carried Jules Rimet and the footballers representing France, Romania and Belgium who were participating in the tournament that year. The first team to be awarded the trophy was Uruguay, the winners of the 1930 World Cup.[3]

During World War II, the trophy was held by 1938 winners Italy. Ottorino Barassi, the Italian vice-president of FIFA and president of FIGC, secretly transported the trophy from a bank in Rome and hid it in a shoe-box under his bed to prevent Adolf Hitler and the Nazis from taking it.[4] The 1958 FIFA World Cup in Sweden marked the beginning of a tradition regarding the trophy. As Brazilian captain Hilderaldo Bellini heard photographer requests for a better view of the Jules Rimet Trophy, he lifted it up in the air. Every Cup-winning captain ever since has repeated the gesture.[5]

On 20 March 1966, four months before the 1966 FIFA World Cup in England, the trophy was stolen during a public exhibition at Westminster Central Hall.[6] The trophy was found just seven days later wrapped in newspaper at the bottom of a suburban garden hedge in Upper Norwood, South London, by a dog named Pickles.[7]

As a security measure, The Football Association secretly manufactured a replica of the trophy for use in exhibitions rather than the original. This replica was used on subsequent occasions up until 1970 when the original trophy had to be handed back to FIFA. Since FIFA had explicitly denied the FA permission to create a replica, the replica also had to disappear from public view and was for many years kept under its creator's bed. This replica was eventually sold at an auction in 1997 for £254,500, when it was purchased by FIFA. The high auction price, ten times the reserve price of £20,000–£30,000, was led by speculation that the auctioned trophy was not the replica trophy but the original itself. Subsequent testing by FIFA, however, confirmed the auctioned trophy was indeed a replica[8] and FIFA soon afterwards arranged for the replica to be lent for display at the English National Football Museum, which was then based in Preston but is now in Manchester.

The Brazilian team won the tournament for the third time in 1970, allowing them to keep the real trophy in perpetuity, as had been stipulated by Jules Rimet in 1930.[9] It was put on display at the Brazilian Football Confederation headquarters in Rio de Janeiro in a cabinet with a front of bullet-proof glass.

On 19 December 1983, the wooden rear of the cabinet was pried open with a crowbar and the cup was stolen again.[10] Four men were tried and convicted in absentia for the crime.[11] The trophy has never been recovered, and it is widely believed to have been melted down and sold.[12] Only one piece of the Jules Rimet Trophy has been found, the original base which FIFA had kept in a basement of the federation's Zurich headquarters prior to 2015.[13]

The Confederation commissioned a replica of their own, made by Eastman Kodak, using 1.8 kg (3.97 lb) of gold. This replica was presented to Brazilian military president João Figueiredo in 1984.[11]

The trophy was the subject of a 2014 documentary "Mysteries of the Rimet Trophy" shown as part of ESPN's 30 for 30: Soccer Stories films series during the 2014 World Cup.[14]

A replacement trophy was commissioned by FIFA for the 1974 World Cup. Fifty-three submissions were received from sculptors in seven countries.[12][15] Italian artist Silvio Gazzaniga was awarded the commission. The trophy stands 36.5 centimetres (14.4 inches) tall and is made of 5 kg (11 lb) of 18 carat (75%) gold with a base (13 centimetres [5.1 inches] in diameter) containing two layers of malachite. It has been asserted by Sir Martyn Poliakoff that the trophy is hollow; if, as is claimed, it were solid, the trophy would weigh 70–80 kg and would be too heavy to lift.[16][17] Produced by Bertoni, Milano in Paderno Dugnano, it weighs 6.175 kg (13.6 lb) in total and depicts two human figures holding up the Earth. Gazzaniga described the trophy thus, "The lines spring out from the base, rising in spirals, stretching out to receive the world. From the remarkable dynamic tensions of the compact body of the sculpture rise the figures of two athletes at the stirring moment of victory."[12]

The trophy has the engraving "FIFA World Cup" on its base. After the 1994 FIFA World Cup a plate was added to the bottom side of the trophy on which the names of winning countries are engraved, and are therefore not visible when the trophy is standing upright. The inscriptions state the year in figures and the name of the winning nation in its national language; for example, "1974 Deutschland" or "1994 Brasil". In 2010, however, the name of the winning nation was engraved as "2010 Spain", in English, not in Spanish.[18][19] As of 2014, ten winners have been engraved on the base. The plate is very likely to be replaced after they run out of space; as recent images of the trophy show, there is space left for only three more engravings at the most, which means that should occur in 2030, when the tournament will celebrate its 100th anniversary.[18] FIFA's regulations now state that the trophy, unlike its predecessor, cannot be won outright: the winners of the tournament receive a Bronze replica which is gold plated rather than solid gold.[12] Germany was the first nation to win the new trophy for the third time in 2014.[20]