In professional wrestling, a face, babyface or baby is a heroic or a "good guy" wrestler, booked (scripted) by the promotion with the aim of being cheered by fans.[1] Faces, traditionally, will wrestle within the rules and avoid cheating (in contrast to the Heels that use illegal moves and call in additional wrestlers to do their work for them) while behaving positively towards the referee and the audience.

Such characters are also referred to as a blue-eye in British wrestling, and cara or técnico in lucha libre. The face character will be portrayed as a hero relative to the heel wrestlers, who are analogous to villains.[2] Not everything a face wrestler does must be heroic: faces need only to be cheered by the audience to be effective characters. The vast majority of wrestling storylines involving faces will place a face against a heel, although more elaborate set-ups (such as two faces being manipulated by a nefarious outside party into fighting) often happen as well.

In the world of lucha libre wrestling, they're generally known for using moves requiring technical skill, particularly aerial maneuvers, and wearing outfits using bright colors with positive associations (such as solid white). This is contrasted with the villainous 'rudos' that are generally known for being brawlers, using physical moves that emphasize brute strength and/or size while often having outfits akin to demons or other nasty characters. 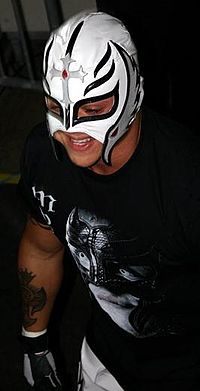 Wrestler Rey Mysterio, seen here at No Way Out in February 2006, is an example of a pure 'face' who has played heroic roles for almost his entire career, with his lucha libre inspired outfit prominently displaying Christian crosses.

Traditional faces are classic "good guy" characters who do not break the rules, follow instructions of those in authority such as the referee, are polite and well-mannered towards the fans, and often overcome the rule-breaking actions of their heel opponents to cleanly win matches.[citation needed] While many modern faces still fit this model, other versions of the face character are now also common. A good example would be Stone Cold Steve Austin. While clearly not championing rule following, nor submission to authority, he was still regarded as the face in many of his duels such as his rivalry with World Wrestling Federation (WWF, later WWE) owner Mr. McMahon.

The portrayal of face wrestlers changed in the 1990s with the birth of Extreme Championship Wrestling (ECW), the start of World Championship Wrestling' (WCW) New World Order (nWo) storyline, and the "attitude era" of the WWF.[citation needed] During this time, wrestlers like Steve Austin and Sting used tactics traditionally associated with heels, but remained popular with the fans.[citation needed] Although wrestlers such as Dick the Bruiser, Crusher and Freddie Blassie had been faces while using such tactics well before this, the attitude era is usually credited with this new kind of face.[citation needed]

Conversely, Kurt Angle was introduced to the then-WWF with an American hero gimmick based on his gold medal win at the 1996 Summer Olympics. He presented himself as a role model, and stressed the need to work hard to realize one's dreams.[citation needed] Although such a personality appears appropriate for a face wrestler, Angle's character was arrogant and constantly reminded people of his Olympic glory, behaving as if he thought he was better than the fans.[3] Angle's character served as a meta-reference to how wrestling had changed. Although his character was intended to be a heel and behaved accordingly, some commentators speculated that if Angle attempted to get over as a face using a more heroic version of the same character, he would have failed. Unusually, Angle did not use any of these heroic mannerisms when playing a face character, instead acting as somewhat of an antihero with a few elements of the "lovable loser" character archetype.[citation needed]

Fans sometimes dislike face wrestlers, despite the way they are promoted. Some reasons for this include repetitive in-ring antics, a limited moveset, a lengthy title reign, lack of selling his or her opponents' moves, or an uninteresting character. This often results in wrestlers who are supposed to be cheered receiving a negative or no reaction from the fans. This included wrestling's most popular star of the 1980s, then WWF Champion Hulk Hogan who despite his popularity was at times booed by the crowd. One such instance was in late 1986 when Hogan appeared on "The Snake Pit", a talk segment hosted by heel wrestler Jake "The Snake" Roberts. At the end of the segment Roberts hit Hogan with his finishing move the DDT. This was supposed to lead into a feud between Hogan and Roberts, but the WWF were shocked when fans started cheering for the DDT and the feud idea was quickly dropped, though it did convince the WWF that Roberts should become a face.

Another time was when Hogan wrestled a match in Toronto, Canada during the early 1990s against heel wrestler The Mountie (Jacques Rougeau). Despite Hogan being the face and The Mountie being the heel, the crowd were clearly behind Canadian wrestler Rougeau despite the best efforts of he and his manager "The Mouth of the South" Jimmy Hart to draw heat from the crowd (the WWF later edited the footage so that it appeared the crowd were actually cheering for Hogan). By the 1990s Hogan's "All American Hero" persona had been running for close to a decade and fans had become tired of it, while another explanation of the Canadian crowds reaction was that they were simply cheering for one of their own while booing the American wrestler, something that was becoming increasingly frequent in Canada with the amount of top level Canadian talent in wrestling including Rougeau, Rick Martel and Bret "The Hitman" Hart.

However, at the 1992 Royal Rumble, Sid Justice (an up-and-coming face) eliminated Hogan (an established face). This was intended to generate heat (boos) from the audience, as it started Justice's heel turn. However, the crowd instead gave an audible pop (cheers). WWF then re-dubbed the audio from boos to cheers to subsequent re-airings of the event to make it appear as if Justice was taking heat when eliminating Hogan. To further try and maintain Hogan's position as the top face, they also had WWF color commentator Gorilla Monsoon re-dub his commentary to shame Justice for his actions, when he previously lauded them ("every man for himself").

The Rock, who initially wrestled as Rocky Maivia (November 1996 to August 1997), was depicted as a classic face, but the fans despised him. His constant attempts to get the fans to cheer for him only made him less popular. He became popular with the fans after the start of his heel run in 1997, in which his constant attempts to mock the fans would only be met with cheers. John Cena has a history of receiving mixed reactions and even full heat from the crowd, despite being presented as a face. Despite his portrayal as a face character, the fans criticize him due to his stale gimmick and lack of selling his opponent's moves.[4] More recently, when Batista returned to WWE in 2014 after a four-year absence, he was booked as a face but was constantly booed to the point that WWE couldn't ignore the crowd reactions anymore and abruptly turned him heel two months before he was planned to turn heel.[5]

Some face wrestlers would often give high fives or give out merchandise to fans while entering the ring before their match, such as T-shirts, sunglasses, hats, and masks. Bret Hart was one of first superstars to make this popular, as he would drape his signature sunglasses on a child in the audience. Rey Mysterio, who has been a face in WWE since his debut, would go to any fan (frequently a child) wearing a replica of his mask, and touch their head with his head for good luck before wrestling. Alberto Del Rio, after turning face, would give his signature scarf to a fan before entering the ring, and John Cena always throws his shirts and caps in the crowd before entering a match. Big Show would give his hat to a fan when he was a face.

The majority of the time, faces who are low-carders, or lesser known, are used as jobbers. These wrestlers usually lose matches against established wrestlers.

Some faces, such as Ricky Steamboat and Hulk Hogan, promoted an image as a 'family man' and supported their persona by appearing with their family members before and after matches (Steamboat famously carried his 8 month old son Richard Jr. into the ring with him at WrestleMania IV before his match with Greg "The Hammer" Valentine, before handing him to his wife Bonnie before the match started). These actions often relate to wrestlers promoting charity work or other actions outside of the ring, blurring the lines between scripted wrestling and their personal lives.