From Infogalactic: the planetary knowledge core
Jump to: navigation, search
For other uses, see Factory (disambiguation).

A factory (from Latin facere, meaning "to do"; Portuguese feitoria, Dutch factorij, French factorerie, German Faktorei) was an establishment for factors or merchants carrying on business in foreign lands.[1] Initially established in parts of Medieval Europe, factories eventually spread to other parts of the world in the wake of European trading ventures and, in many cases, were precursor to colonial expansion. Factories could serve simultaneously as market, warehouse, customs, defense and support to navigation or exploration, headquarters or de facto government of local communities. The head of the factory was the chief factor.

In North America, this trading formula was adopted by colonists and later Americans to exchange goods with local non-Western societies, especially in Native American Indian territory. In that context, these establishments were often called trading posts. 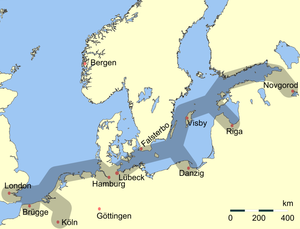 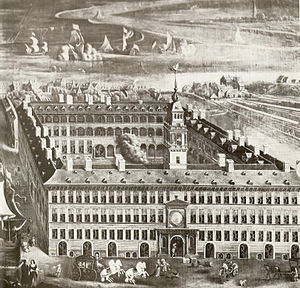 The Oostershuis, a Kontor in Antwerp

Although European colonialism traces its roots from the Classical Era – Phoenicians, Greeks, and Romans established colonies around the Mediterranean – and almost every major city of the world once started as a trading post (Venice, Naples, Rotterdam, New York, Shanghai, Lisbon, etc.), "factories" were a unique institution born in medieval Europe.

Originally, factories were organizations of European merchants from a state, meeting in a foreign place. These organizations sought to defend their common interests, mainly economic (as well as organized insurance and protection), enabling the maintenance of diplomatic and trade relations within the foreign state where they were set.

The factories were established from 1356 onwards in the main trading centers, usually ports or central hubs that have prospered under the influence of the Hanseatic League and its guilds and kontors. The Hanseatic cities had their own law system and furnished their own protection and mutual aid. The Hanseatic League maintained factories, among others, in England (Boston, King's Lynn), Norway (Tønsberg) and Finland (Åbo). Later, cities like Bruges and Antwerp actively tried to take over the monopoly of trade from the Hansa, inviting foreign merchants to join in.

Because foreigners were not allowed to buy land in these cities, merchants joined around factories, like the Portuguese in their Bruges factory: the factor(s) and his officers rented the housing and warehouses, arbitrated trade, and even managed insurance funds, working both as an association and an embassy, even administering justice within the merchant community.[2]

During the territorial and economic expansion of the Age of Discovery, the factory was adapted by the Portuguese and spread throughout from West Africa to Southeast Asia.[3] The Portuguese feitorias were mostly fortified trading posts settled in coastal areas, built to centralize and thus dominate the local trade of products with the Portuguese kingdom (and thence to Europe). They served simultaneously as market, warehouse, support to the navigation and customs and were governed by a feitor ("factor") responsible for managing the trade, buying and trading products on behalf of the king and collecting taxes (usually 20%). 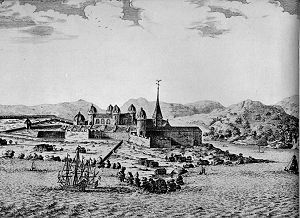 Elmina Castle viewed from the sea in 1668. Notice European shipping in foreground and African houses/town shown in left hand corner and in various areas around the fort.

The first Portuguese feitoria overseas was established by Henry the Navigator in 1445 on the island of Arguin, off the coast of Mauritania. It was built to attract Muslim traders and monopolize the business in the routes traveled in North Africa. It served as a model for a chain of African feitorias, Elmina Castle being the most notorious.

Between the 15th and 16th centuries, a chain of about 50 Portuguese forts either housed or protected feitorias along the coasts of West and East Africa, the Indian Ocean, China, Japan, and South America. The main Portuguese factories were in Goa, Malacca, Ormuz, Ternate, and Macau. They were mainly driven by the trade of gold and slaves on the coast of Guinea, spices in the Indian Ocean, and sugar cane in the New World. They were also used for local triangular trade between several territories, like Goa-Macau-Nagasaki, trading products such as sugar, pepper, coconut, timber, horses, grain, feathers from exotic Indonesian birds, precious stones, silks and porcelain from the East, among many other products. In the Indian Ocean, the trade in Portuguese factories was enforced and increased by a merchant ship licensing system: the cartazes.[4]

From the feitorias, the products went to the main outpost in Goa, then to Portugal where they were traded in the Casa da Índia, which also managed exports to India.[5] There they were sold, or re-exported to the Royal Portuguese Factory in Antwerp, where they were distributed to the rest of Europe.

Easily supplied and defended by sea, the factories worked as independent colonial bases. They provided safety, both for the Portuguese, and at times for the territories in which they were built, protecting against constant rivalries and piracy. They allowed Portugal to dominate trade in the Atlantic and Indian oceans, establishing a vast empire with scarce human and territorial resources. Over time, the feitorias were sometimes licensed to private entrepreneurs, giving rise to some conflict between abusive private interests and local populations, such as in the Maldives. 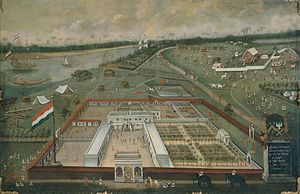 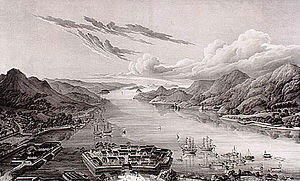 Dejima island in Nagasaki Bay, first Portuguese and then Dutch factory during Japan's self-imposed isolation (sakoku), from 1641 until 1853. 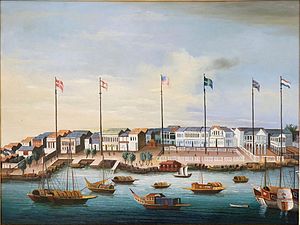 Canton "Thirteen Factories", c. 1820, with flags of Denmark, Spain, the U.S., Sweden, Britain, and the Netherlands

The establishment of factories by other European powers along the trade routes explored by Portugal and Spain started in the 17th century, first by the Dutch and then by the English. They went on to establish in conquered Portuguese feitorias and further enclaves, as they explored the coasts of Africa, Arabia, India and South East Asia, in search of the source of the lucrative spice trade.

Factories were then explored by chartered companies, like the Dutch East India Company (VOC), founded in 1602, and the Dutch West India Company (WIC), founded in 1621. These factories provided for the exchange of products between European companies and local populations and, increasingly, the colonies that often started as a factory and a few warehouses. Usually these factories had larger warehouses to fit the products resulting from the increasing agricultural development of colonies, which had boosted in the New World with the Atlantic slave trade.

In these factories, the products were checked and got their first rough treatment, being weighed and packaged to suit for the long sea voyage. In particular, spices, cocoa, tea, tobacco, coffee, sugar, porcelain and fur were well protected against the salty sea air and against deterioration. The factor was there, as the representative of the trading partners in all matters, reporting to the headquarters and being responsible for the products’ logistics (proper storage and shipping). Given that information took a long time to reach the company headquarters, this was dependent on an absolute trust.

Some of the Dutch factories were in Cape Town (South Africa), Calicut, Ambon, Coromandel Coast, Colombo, Formosa, Canton, Mocha (Yemen) and Fort Orange (New York), Dejima, from 1641 to 1859 on an artificial island in the port of Nagasaki, Japan.

The American factories often played a strategic role as well, sometimes operating as forts, providing a degree of protection for Indians and allied colonists from enemy Indians and colonists. Later factories established by the United States often served to protect Indians from American citizens. 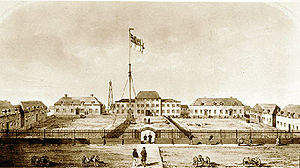 The factory trading post building at Fort Clark on the left, which in turn was within a walled fort

York Factory was founded by the chartered Hudson's Bay Company in 1697. For a longtime it was headquarters of the company, that was once the de facto government in parts of North America, like Rupert's Land, before European-based colonies and nation states existed. It controlled the fur trade throughout much of British-controlled North America for several centuries, undertaking early exploration. Its traders and trappers forged early relationships with many groups of First Nations/Native Americans and a network of trading posts formed the nucleus for later official authority in many areas of Western Canada and the United States.

The early coastal factory model contrasted with the system of the French, who established an extensive system of inland posts and sent traders to live among the tribes of the region. After war broke out in Europe between France and England in the 1680s, the two nations regularly sent expeditions to raid and capture each other's fur trading posts. In March 1686, the French sent a raiding party under Chevalier des Troyes over 1,300 km (810 mi) to capture the company's posts along James Bay. In 1697, Pierre Le Moyne d'Iberville, commander of the company's captured posts defeated three ships of the Royal Navy in the Battle of the Bay on his way to capture York Factory by a ruse. York Factory changed hands several times in the next decade and was finally ceded permanently in the 1713 Treaty of Utrecht. After the treaty, the Hudson Bay Company rebuilt York Factory as a brick star fort at the mouth of the nearby Hayes River, its present location.

The United States government sanctioned a factory system from 1796 to 1822, with factories scattered through the mostly territorial portion of the country.

The factories were officially intended through a series of legislation called the Indian Intercourse Acts to protect Native Americans from exploitation. However, in practice, numerous tribes conceded extensive territory in exchange for the trading posts, as happened in the Treaty of Fort Clark in which the Osage Nation ceded most of Missouri at Fort Clark.

Usually a blacksmith was assigned to the factory to repair utensils and build or maintain plows. Frequently the factories had some sort of milling operation associated with them.

The factories marked the United States' attempt to continue a process originally pioneered by the French and then by the Spanish to officially license the fur trade in Upper Louisiana.

Factories were frequently referred to as "forts" and often had numerous unofficial names. Legislation was often passed calling for military garrisons at the fort but their de facto purpose was a trading post.

York Factory was founded by the Hudson's Bay Company in 1697.

In the United States factories under the Superintendent of Indian Trade:[1]