Faculty of Law, University of Cambridge

From Infogalactic: the planetary knowledge core
Jump to: navigation, search
For other uses, see Faculty of Law. 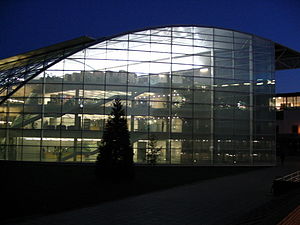 The Faculty of Law, University of Cambridge, by night, 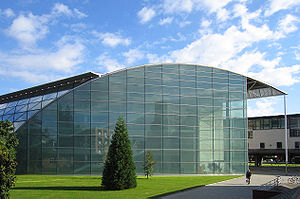 ...and by day
File:Facinterior.jpg
The interior of the Faculty building

The Faculty of Law, Cambridge is the law school of the University of Cambridge. The Faculty is one of the world’s premier law schools, renowned for the quality of its teaching and its cutting-edge legal research.[1][2] It is based at the university's Sidgwick Site in Cambridge.

The Faculty has 24 professors, nine readers, and over 70 other University, Faculty and College Teaching Officers. The student body comprises about 700 undergraduate and 225 graduate students.

The Faculty building opened in 1996 and was designed by Norman Foster, who also designed the terminal building at Stansted Airport and 30 St Mary Axe (the 'Gherkin' in London). The building suffered serious acoustic problems (primarily due to a lack of consideration of acoustics in Foster's design), with its form amplifying any noise from the lower levels and causing significant disturbance at higher levels, not least in the library.[3] This was fixed in 1999 with the installation of a glazed acoustic screen, separating quiet areas from noisy ones.

The Faculty building contains the University's Squire Law Library, together with offices, lecture and seminar rooms and common room facilities.

The Squire Law Library, which occupies the majority of the first, second and third floors of the building, is a dependent library of Cambridge University Library. It contains one of the three largest legal collections in the UK (approx. 180,000 volumes). The collection is very strong across UK law, the law of other major common law countries (the United States, Australia, Canada and New Zealand), and the law of the European Union, France and Germany. There are, additionally, smaller collections for the law of many other countries. The library provides its users with access to many major legal databases.

The library was founded in 1904, at first with only 8000 volumes,[4] although this soon increased. In 1934, together with the Seeley Historical Library, it moved to the Cockerell Building on Senate House Passage, previously the home of the University Library built in 1837–42. The Squire took over the whole of the Cockerell Building on the construction of James Stirling's building for the history library in 1968. With the Squire's own move in turn, its former site has now become the library of Gonville and Caius College.

Most individual colleges also have a smaller law library of their own.

The Faculty has a number of associated Research Centres: