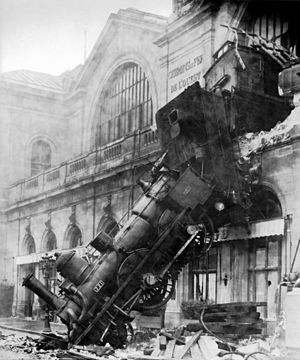 Failure is the state or condition of not meeting a desirable or intended objective, and may be viewed as the opposite of success.[1] Product failure ranges from failure to sell the product to fracture of the product, in the worst cases leading to personal injury, the province of forensic engineering.

"If you want to succeed, double your failure rate."

Wired Magazine editor Kevin Kelly likewise explains that a great deal can be learned from things going unexpectedly, and that part of science's success comes from keeping blunders "small, manageable, constant, and trackable". He uses the example of engineers and programmers who push systems to their limits, breaking them to learn about them. Kelly also warns against creating a culture (e.g. school system) that punishes failure harshly, because this inhibits a creative process, and risks teaching people not to communicate important failures with others (e.g. Null results).[3]

The criteria for failure are heavily dependent on context of use, and may be relative to a particular observer or belief system. A situation considered to be a failure by one might be considered a success by another, particularly in cases of direct competition or a zero-sum game. Similarly, the degree of success or failure in a situation may be differently viewed by distinct observers or participants, such that a situation that one considers to be a failure, another might consider to be a success, a qualified success or a neutral situation.

It may also be difficult or impossible to ascertain whether a situation meets criteria for failure or success due to ambiguous or ill-defined definition of those criteria. Finding useful and effective criteria, or heuristics, to judge the success or failure of a situation may itself be a significant task.

Failure can be differentially perceived from the viewpoints of the evaluators. A person who is only interested in the final outcome of an activity would consider it to be an Outcome Failure if the core issue has not been resolved or a core need is not met. A failure can also be a process failure whereby although the activity is completed successfully, a person may still feel dissatisfied if the underlying process is perceived to be below expected standard or benchmark.

Loser is a derogatory term for a person who is (according to the standards of the observer) generally unsuccessful or undesirable.

A commercial failure is a product that does not reach expectations of success.

Most of the items listed below had high expectations, significant financial investments, and/or widespread publicity, but fell far short of success. Due to the subjective nature of "success" and "meeting expectations," there can be disagreement about what constitutes a "major flop."

"Fail" is the name of a popular Internet meme where users superimpose a caption, often the word "fail" or "epic fail", onto photos or short videos depicting unsuccessful events or people falling short of expectations.[4] In July 2003, a contributor to Urban Dictionary wrote that the term, "fail," could be used as an interjection, "when one disapproves of something," citing the example: "You actually bought that? FAIL." This most likely originated as a shortened form of "You fail" or, more fully, "You fail it," the taunting "game over" message in the 1998 Japanese video game Blazing Star, notorious for its fractured English.[5][6][7] There is an entire Internet site dedicated to "fails" called Fail Blog.[5] The #fail hash tag is used on the microblogging site Twitter to indicate contempt or displeasure, and the image that accompanies the message that the site is overloaded is referred to as the "fail whale".[8]

Failboat or consignment of fail is a popular macro series, featuring images of cargo vessels tipping over or shedding cargo, with captions such as 'the failboat has arrived', or 'all aboard the failboat'. The original vessel whose image was used was the MV Cougar Ace,[citation needed] although the Ital Florida, the MV Napoli and even the SS Normandy, sunk at her berth in New York Harbor, have appeared.

The term "miserable failure" has also been popularized as a result of a widely known "Google bombing," which caused Google searches for the term to turn up the White House biography of George W. Bush.[9]