From Infogalactic: the planetary knowledge core
Jump to: navigation, search
This article is about the post-WW II transport aircraft. For the nuclear bomb equipped B-29 bomber, see Bockscar. 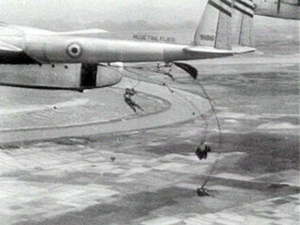 French Union paratroops dropping from a C-119 over Dien Bien Phu in 1954. 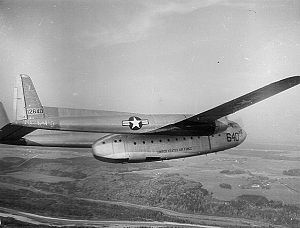 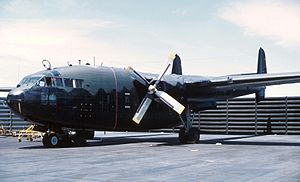 The Fairchild C-119 Flying Boxcar (Navy and Marine Corps designation R4Q) was an American military transport aircraft developed from the World War II-era Fairchild C-82 Packet, designed to carry cargo, personnel, litter patients, and mechanized equipment, and to drop cargo and troops by parachute. The first C-119 made its initial flight in November 1947, and by the time production ceased in 1955, more than 1,100 C-119s had been built. Its cargo-hauling ability and unusual appearance earned it the nickname "Flying Boxcar".

The Air Force C-119 and Navy R4Q was initially a redesign of the earlier C-82 Packet, built between 1945 and 1948. The Packet provided service to the Air Force's Tactical Air Command and Military Air Transport Service for nearly nine years during which time its design was found to have several serious problems. All of these were addressed in the C-119.

In contrast to the C-82, the cockpit was moved forward to fit flush with the nose rather than its previous location over the cargo compartment. This resulted in more usable cargo space and larger loads than the C-82 could accommodate. The C-119 also featured more powerful engines, and a wider and stronger airframe. The first C-119 prototype (called the XC-82B) first flew in November 1947, with deliveries of C-119Bs from Fairchild's Hagerstown, Maryland factory beginning in December 1949.[2]

In 1951, Henry J. Kaiser was awarded a contract to assemble additional C-119s at the Kaiser-Frazer automotive factory located in the former B-24 plant at Willow Run Airport in Belleville, Michigan. Initially, the Kaiser-built C-119F differed from the Fairchild aircraft by the use of Wright R-3350-85 Duplex Cyclone engines in place of Fairchild's use of the Pratt & Whitney R-4360 Wasp Major radial engine. The Wright engine was a proven design used previously on the B-29, and though it lacked the R-4360's superchargers, it proved to be virtually identical in performance, and possibly superior at higher altitudes.[citation needed] Kaiser built 71 C-119s at Willow Run in 1952 and 1953 (AF Ser. No. 51-8098 to 51-8168) before converting the factory for a planned production of the Chase C-123 that never eventuated. The Kaiser sub-contract was frowned upon by Fairchild, and efforts were made through political channels to stop Kaiser's production, which may have proven successful. Following Kaiser's termination of C-119 production the contract for the C-123 was instead awarded to Fairchild. Most Kaiser-built aircraft were issued to the U.S. Marine Corps as R4Qs, with several later turned over to the South Vietnamese Air Force in the 1970s.

The AC-119G "Shadow" gunship variant was fitted with four six-barrel 7.62×51mm NATO miniguns, armor plating, flare launchers, and night-capable infrared equipment. Like the AC-130 that succeeded it, the AC-119 proved to be a potent weapon. The AC-119 was made more deadly by the introduction of the AC-119K "Stinger" version, which featured the addition of two General Electric M61 Vulcan 20 mm cannon, improved avionics, and two underwing-mounted General Electric J85-GE-17 turbojet engines, adding nearly 6,000 lbf (27 kN) of thrust.

Other major variants included the EC-119J, used for satellite tracking, and the YC-119H Skyvan prototype, with larger wings and tail.

In civilian use, many C-119s feature the "Jet-Pack" modification, which incorporates a 3,400 lbf (15,000 N) Westinghouse J34 turbojet engine in a nacelle above the fuselage.

Two additional airframes were built by Fairchild for static tests 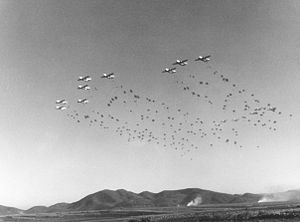 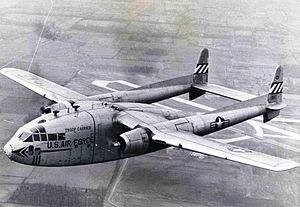 The aircraft saw extensive action during the Korean War as a troop and equipment transport. In July 1950, four C-119s were sent to FEAF for service tests. Two months later, the C-119 deployed with the 314th Troop Carrier Group and served in Korea throughout the war. In December 1950, after Chinese PLA troops blew up a bridge [N 1]at a narrow point on the evacuation route between Koto-ri and Hungnam, blocking the withdrawal of U.N. forces, eight U.S. Air Force C-119 Flying Boxcars flown by the 314th Troop Carrier Group[4][N 2] were used to drop portable bridge sections by parachute. The bridge, consisting of eight separate sixteen-foot long, 2,900-pound sections, was dropped one section at a time, using two parachutes on each section. Four of these sections, together with additional wooden extensions were successfully reassembled into a replacement bridge by Marine Corps combat engineers and the US Army 58th Engineer Treadway Bridge Company, enabling U.N. forces to reach Hungnam.

The C-119s saw service with the 456th Troop Carrier Wing which was attached to the Strategic Air Command (SAC) from 25 April 1955 – 26 May 1956. The C-119s performed aerial recovery of high altitude balloon-borne instrument packages. C-119s from the 6593rd Test Squadron based at Hickam Air Force Base, Hawaii performed several aerial recoveries of film-return capsules during the early years of the Corona spy satellite program. On 19 August 1960, the recovery by a C-119 of film from the Corona mission code-named Discoverer 14 was the first successful recovery of film from an orbiting satellite and the first aerial recovery of an object returning from Earth orbit.[5]

The C-119 went on to see extensive service in French Indochina, beginning in 1953 with aircraft secretly loaned by the CIA to French forces for troop support. These aircraft were generally flown in French markings by American CIA pilots often accompanied by French officers and support staff. The C-119 was to play a major role during the siege at Dien Bien Phu, where they flew into increasingly heavy fire while dropping supplies to the besieged French forces.[6] The only two American pilot casualties of the siege at Dien Bien Phu were James B. McGovern, Jr.("Earthquake McGoon") and Wallace ("Wally") A. Buford. Both pilots, together with a French crew member, were killed in early June, 1954, when their C-119, while making an artillery drop, was hit and crippled by Viet Minh anti-aircraft fire; the aircraft then flew an additional 75 miles East into Laos before it crashed.

During the Sino-Indian War of 1962, the C-119 was extensively used for supply of Indian forces. President Kennedy allowed sales of spares of C-119 on priority basis upon request by the Indian government.

During the Vietnam War, the incredible success of the Douglas AC-47 Spooky but limitations of the size and carrying capacity of the plane led the US Air Force to develop a larger plane to carry more surveillance gear, weaponry, and ammunition, the AC-130 Spectre. However, due to the strong demands of C-130s for cargo use there were not enough Hercules frames to provide Spectres for operations against the enemy. The Air Force filled the gap by converting C-119s into AC-119s each equipped with four 7.62 minigun pods, a Xenon searchlight, night observation sight, flare launcher, fire control computer and TRW fire control safety display to prevent incidents of friendly fire. The new AC-119 squadron was given the call-sign "Creep" that launched a wave of indignation that led the Air Force to change the name to "Shadow" on 1 December 1968.[7] C-119G's were modified as AC-119G Shadows and AC-119K Stingers. They were used successfully in both close air support missions in South Vietnam and interdiction missions against trucks and supplies along the Ho Chi Minh Trail. All the AC-119G Gunships were transferred to the South Vietnamese in 1973 when the American forces were withdrawn. 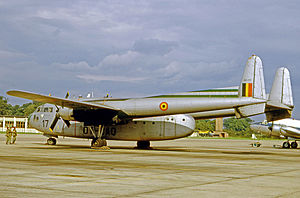 After retirement from active duty, substantial numbers of C-119s and R4Qs soldiered on in the U.S. Navy, U.S. Marine Corps, the Air Force Reserve and the Air National Guard until the mid-1970s, the R4Qs also being redesignated as C-119s in 1962. The last military use of the C-119 by the United States ended in 1974 when a single squadron of Navy Reserve C-119s based at Naval Air Facility Detroit/Selfridge Air National Guard Base near Detroit, Michigan, and two squadrons based at Naval Air Station Los Alamitos, California replaced their C-119s with newer aircraft.

Many C-119s were provided to other nations as part of the Military Assistance Program, including Belgium, Brazil, Ethiopia, India, Italy, Jordan, Taiwan, and (as previously mentioned) South Vietnam. The type was also used by the Royal Canadian Air Force, and by the United States Navy and United States Marine Corps under the designation R4Q until 1962 when they were also redesignated as C-119. 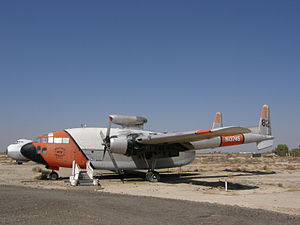 C-119C operated by Hemet Valley Flying Service as Tanker 82 before being retired; now at the Milestones of Flight, Museum, Fox Field, Lancaster, California (note the jet pod above the fuselage). 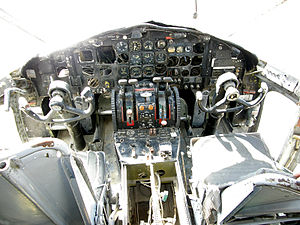 A number of aircraft were acquired by companies who were contracted by the United States Forest Service (USFS) and the Bureau of Land Management to provide airtankers for fighting wildfires. Others were pressed into civilian cargo service. After a series of crashes, the age and safety of the aircraft being used as airtankers became a serious concern, and the U.S. C-119 airtanker fleet was permanently grounded in 1987. Eventually, many of these aircraft were provided to museums across the U.S. in a complicated - and ultimately illegal - scheme where stored USAF Lockheed C-130 Hercules transports and Navy Lockheed P-3 Orion anti-submarine patrol aircraft were provided to the contractors in exchange for the C-119s.[8] (See U.S. Forest Service airtanker scandal.) After the end of the airtanker days, many C-119s flew in Alaska for Northern Pacific Transport, Gifford Aviation, Stebbins & Ambler Air transport, and Delta Associates, being used for public service contracts, such as hauling building materials to the villages in the bush of Alaska that have no road access. 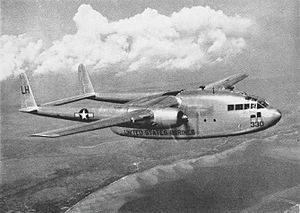 A number of C-119s have been preserved in museums:

A former Canadian C-119G at the Air Mobility Command Museum. 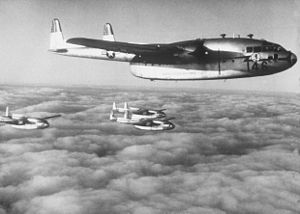