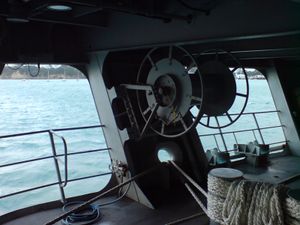 Three mooring hawsers running through fairlead on a RNZN ship.

A fairlead is a device to guide a line, rope or cable around an object, out of the way or to stop it from moving laterally. Typically a fairlead will be a ring or hook. The fairlead may be a separate piece of hardware, or it could be a hole in the structure.

A fairlead can also be used to stop a straight run of line from vibrating or rubbing on another surface. An additional use on boats is to keep a loose end of line from sliding around the deck (e.g. the windward (inactive) jib sheet).

Fairleads are used on almost every sailboat. Even as simple a sailboat as a Sunfish has a fairlead for each of its two lines. A ring fairlead holds the halyard parallel to the mast so its cleat can be located near to the cockpit. On models without a deck block for the sheet, a hook fairlead in the forward edge of the cockpit gives the sailor options when handling the sheet.

An example of hook fairlead can be seen on buildings with an angled flagstaff mounted over a door. At the base of the flagstaff is usually a hook so the flag halyard can be held parallel to the pole, and still tied off to a cleat beside the door, rather than above.es:Gatera (náutica) fr:Chaumard (accastillage) sv:Halkip