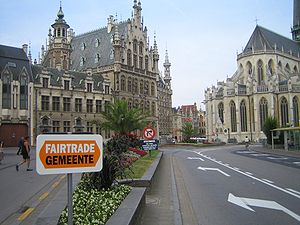 The Fair Trade Towns (not Fairtrade Towns) campaign is the result of a grass-roots citizens movement that started in the UK in 2001 (see below). It allows citizens to get together in order to self-proclaim their town (or other local geographical area) as a region that complies with a few general Fair Trade criteria, that can be adapted from country to country but which retain their main elements.

The Fair Trade Town campaign was first launched in 2001 in Garstang, Lancashire, under the initiative of Bruce Crowther, a local Oxfam supporter, and the Garstang Oxfam Group. The initiative, which aimed to promote Fair Trade certified goods in the town, was highly successful: within a couple of months, awareness of the Fairtrade Mark jumped to over 70% in the town while sales of Fairtrade certified goods increased significantly. Moreover, over the course of the campaign, Garstang developed links with Fair Trade cocoa farming communities in West Africa, which led to the twin town relationship with New Koforidua, Ghana.[1]

As the activities at Garstang gained wider attention, the Fairtrade Foundation launched a set of Fair Trade Town Goals and an Action Guide to encourage others to follow in the town's success. During the 2001-2006 period, over 209 British towns were awarded the Fair Trade status by the Fairtrade Foundation. (Click here to see a Fairtrade Town Map of the UK) In October 2009 448 British towns and 312 towns worldwide awarded the Fair Trade status (in total 760). In November 2012, there were over 1200 worldwide.

In an attempt to replicate the success of the Fairtrade Foundation's Fairtrade Town program, a Europe-wide program called "Fair Trade Towns in Europe", part-funded by the European Commission, was launched jointly by several Fair Trade labelling initiatives.

In November 2006, the first ever European Fair Trade Towns conference was hosted at London Southbank University. The goals of the conference were to

Following the success of the first event, a second Fair Trade towns conference was subsequently held in Brussels in January 2008. The sixth conference was held in Poznan (Poland) in November 2012, and the 2013 and 2014 international conferences are foreseen to take place in Oslo (Norway) and Kumamoto (Japan), respectively. 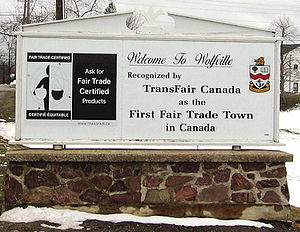 Formal guidelines have been produced jointly by several FLO member Fairtrade labelling initiatives. In order to be awarded Fair Trade status, an area must meet five criteria (exact numbers and proportions vary from country to country):

In 2002 The Wales Fair Trade Forum, a network of development NGOs and Fair Trade campaigners, began working to make Wales the world's first Fair Trade country. The idea was based upon the Fair Trade Town scheme run by the Fairtrade Foundation in the UK. In 2005 The Welsh Assembly Government agreed to back the idea and in 2006 Fair Trade groups from Scotland and Wales agreed the criteria for becoming a Fair Trade country.

The draft criteria for a "Fair Trade Nation" are:[1]