Fairy is a brand of washing-up liquid produced by Procter & Gamble at their West Thurrock factory (The London Plant), in England, launched in 1950. Fairy liquid is traditionally green, prompting the well-known advertising jingle "Now hands that do dishes can feel as soft as your face with mild green Fairy Liquid".[1]

As of 2015, Fairy is sold in most parts of Europe, although regional names vary. Fairy liquid is available in a variety of colour and scent combinations. The original white bottle with red cap was replaced with PET bottles.

In the UK, Fairy Liquid has become a genericized trademark for washing up liquid.

Fairy soap bars were originally manufactured by Thomas Hedley Co. of Newcastle upon Tyne which was acquired by Procter & Gamble in 1927.

In February 2010, Fairy brought back the original washing up liquid bottle (which was used until 2000) to celebrate 50 years of the brand. Nanette Newman, who appeared in the 1980s TV advertisements returned for a new campaign to promote the launch.

In the United Kingdom and Ireland, Fairy is also a longstanding brand of non-biological laundry detergent, the original soap-based variant being known as "Fairy Snow".[2] In recent years, Fairy Non-Bio also have added fabric conditioner to their product range. Like Fairy dish detergent, its traditional trademark is a (somewhat unlikely)[citation needed] walking baby.

Fairy was also a brand of soap in those countries, characteristically green in colour and available both in the form of larger rectangular 155g blocks for laundry and other household purposes [3] and in the smaller rounded 125g size as toilet soap,[4] where it used the same "walking baby" trademark as the laundry powder and was marketed as a pure, mild product.[5] It was suddenly discontinued by the manufacturers in about 2009 to the disapproval of its faithful customer base.[citation needed]

The Fairy brand has expanded further from the soap-based products, and is now also used on automatic dishwashing products; the latest being "Fairy Activebursts". These are pouches of powder and specially formulated washing-up liquid, which are specifically designed for domestic dishwashers. There are also other variants, a power spray for cleaning pots and pans and for a period of time a foam/mousse was sold.

Outside the United Kingdom 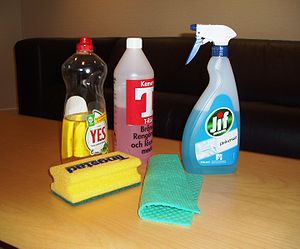 A bottle of Fairy branded Yes in Sweden[6]

Fairy was released onto the Australian market in 2011 and is quickly growing to become one of the most popular choices available within the country.[citation needed] In Egypt, Fairy competes with Henkel's Pril, and takes second place to Pril in market share. It is notable for its aggressive advertising campaign featuring actresses from Egyptian television soap operas emphasizing its strength (which it claims is four times higher than Pril). Fairy is also sold in Germany; in 2000 it was briefly replaced by Dawn (the brand used in the United States market), but after sharply declining sales due to an unfamiliar brand, the Fairy name was revived in 2002.