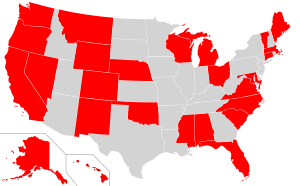 States with laws against faithless electors

Electors are typically chosen and nominated by a political party or the party's presidential nominee. Electors usually are party members with a reputation for high loyalty to the party and its candidate. A faithless elector runs the risk of party censure and political retaliation from their party as well as, in some states, potential criminal penalties. Candidates for elector are nominated by state political parties in the months prior to Election Day. In some states, the electors are nominated in primaries, the same way that other candidates are nominated. In some states, such as Oklahoma, Virginia and North Carolina, electors are nominated in party conventions. In Pennsylvania, the campaign committee of each candidate names their candidates for elector (an attempt to discourage faithless electors).[1] The parties have generally been successful in keeping their electors faithful, leaving out the cases in which a candidate died before the elector was able to cast a vote.

Although there have been 157 cases of faithlessness as of 2015[update], faithless electors have not yet changed the outcome of any presidential election.[2]

The constitutionality of state pledge laws was confirmed by the Supreme Court in 1952 in Ray v. Blair.[6] The court ruled in favor of the state's right to require electors to pledge to vote for the candidate to whom they are pledged, as well as to remove electors who refuse to pledge. Once the elector has voted, his or her vote can be changed only in states such as Michigan and Minnesota, where votes other than those pledged are rendered invalid. In the twenty-nine states that have laws against faithless electors, a faithless elector may only be punished after he or she votes. The Supreme Court has ruled that, as electors are chosen via state elections, they act as a function of the state, not the federal government. Therefore states have the right to govern electors. The constitutionality of state laws punishing electors for actually casting a faithless vote—rather than merely refusing to pledge—has never been decided by the Supreme Court.

In 157 instances, electors have cast their votes for President or Vice President in a manner different from that prescribed by the legislature of the state they represented. Of those, 71 votes were changed because the original candidate died before the elector was able to cast a vote. Three votes were not cast at all when electors chose to abstain from casting their electoral vote for any candidate.[2] The remaining 83 were changed by the elector's personal interest, or perhaps by accident. Usually, the faithless electors act alone. An exception was the U.S. presidential election of 1836, in which 23 Virginia electors conspired to change their vote together.

Electors do not have to vote for the candidate who received the most votes in any particular state. The following is a list of all faithless electors (in reverse chronological order). The number preceding each entry is the number of faithless electors for the given year.

1 – 2004 election: A Minnesota elector, pledged for Democrats John Kerry and John Edwards, cast his or her presidential vote for John Ewards [sic],[7] rather than Kerry, presumably by accident.[8] (All of Minnesota's electors cast their vice presidential ballots for John Edwards.) Minnesota's electors cast secret ballots, so unless one of the electors claims responsibility, it is unlikely that the identity of the faithless elector will ever be known. As a result of this incident, Minnesota Statutes were amended to provide for public balloting of the electors' votes and invalidation of a vote cast for someone other than the candidate to whom the elector is pledged.[9]

1 – 1988 election: West Virginia Elector Margarette Leach, pledged for Democrats Michael Dukakis and Lloyd Bentsen, instead cast her votes for the candidates in the reverse of their positions on the national ticket; her presidential vote went to Bentsen and her vice presidential vote to Dukakis.

1 – 1976 election: Washington Elector Mike Padden, pledged for Republicans Gerald Ford and Bob Dole, cast his presidential electoral vote for Ronald Reagan, who had challenged Ford for the Republican nomination. He cast his vice presidential vote, as pledged, for Dole.

8 – 1912 election: Republican vice presidential candidate James S. Sherman died before the election. Eight Republican electors had pledged their votes to him but voted for Nicholas Murray Butler instead.

4 – 1892 election: In Oregon, three electors voted for Republican Benjamin Harrison and one faithless elector voted for the third-party Populist candidate, James B. Weaver. All four were pledged to President Harrison, who lost the election.

63 – 1872 election: 63 electors for Horace Greeley changed their votes after Greeley's death, which occurred before the electoral vote could be cast. Greeley's remaining three electors cast their presidential votes for Greeley and had their votes discounted by Congress.

23 – 1836 election: The Democratic Party nominated Richard Mentor Johnson of Kentucky as their vice presidential candidate. The 23 electors from Virginia refused to support Johnson with their votes upon learning of the allegation that he had lived with an African-American woman. There was no majority in the Electoral College and the decision was deferred to the Senate, which supported Johnson as the Vice President.

1 – 1820 election: William Plumer pledged to vote for Democratic Republican candidate James Monroe, but he cast his vote for John Quincy Adams, who was also a Democratic Republican, but not a candidate in the 1820 election. Some historians contend that Plumer did not feel that the Electoral College should unanimously elect any President other than George Washington, but this claim is disputed. (Monroe lost another three votes because three electors died before casting ballots and were not replaced.)

19 – 1796 election: Samuel Miles, an elector from Pennsylvania, was pledged to vote for Federalist presidential candidate John Adams, but voted for Democratic Republican candidate Thomas Jefferson. He cast his other presidential vote as pledged for Thomas Pinckney. An additional 18 electors voted for Adams as pledged, but refused to vote for Pinckney.[11] (This election took place prior to the passage of the 12th Amendment, so there were not separate ballots for president and vice president.)