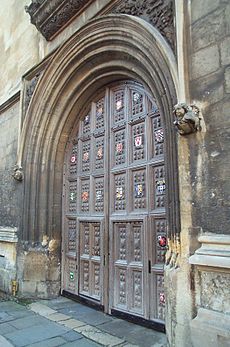 Entrance to the Bodleian Library.

Falconer was the fifth son of George and Harriet Madan. He was educated at Marlborough College and Brasenose College, Oxford, where he took part in Oxford and Cambridge Chess matches in 1873 and 1874, and won the University Singles Fives prize in 1874. He was Fellow of Brasenose from 1875 until 1880, when he was appointed sub-librarian of the Bodleian Library. In 1890 he was given the task of the creating a Summary Catalogue of the manuscripts of the Bodleian beginning with those not included in the catalogue of 1697. The completion of the Summary Catalogue is the chief monument of his work. In 1889 Madan became a Fellow again and lecturer in Palaeography until 1913. Another significant publication of this period is his The early Oxford Press: a bibliography of printing and publishing at Oxford, 1468–1640 (Oxford: Clarendon Press, 1895).[1]

In 1912 Madan became Librarian of the Bodleian. During this time, a new underground book-store under Radcliffe Square was opened, the Library records were put into systematic arrangement, and the Bodleian Quarterly Record, a periodical of more than local interest, was started. He resigned the Librarianship in 1919.

Madan helped Sidney Herbert Williams revise his A Bibliography of Lewis Carroll (London: The Bookman's Journal, 1924), the first such, into A Handbook of the Literature of the Rev. C. L. Dodgson (Lewis Carroll) (London: Oxford University Press, 1931), receiving co-author credit, and published a supplement thereto in 1935. He also edited The Lewis Carroll Centenary in London (London: J. & E. Bumpus, 1932), a catalog of the exhibition.

Falconer Madan married Frances Jane Hayter (1862–1938) second daughter of Harrison Hayter the engineer. His son, Geoffrey, was a celebrated anthologist. His daughter Ethel married Charles Fox Burney and his granddaughter Venetia Burney is noteworthy for proposing the name Pluto for the newly-discovered planet.[4]