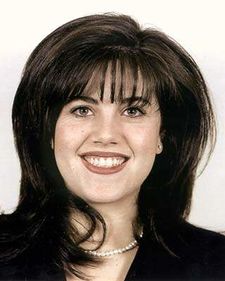 "Hey, you; stop staring at that dead body and start looking at my dress! Look at it!!! It's got a Bill stain!!! He's going to lie about it, you just watch, and then you and me and everybody will talk about it and nothing else for a full year!"
Main article: Shadow Party

Fall-back propaganda refers to the lesser political scandals and disinformation that the Shadow Party promulgates in order to maintain an illusion of prevailing healthy skepticism and journalistic inquiry free of obvious censorship. Reliably relaying propaganda is an important loyalty test for those aspiring to political careers, either directly as legislators, or in accessory roles such as punditry. Unlike official narratives promulgated through the mainstream press and government bureaucracies, fall-back propaganda is often peddled back-door through undercover operatives to credulous critics and social media, and is formulated to be easily debunked after the opposition has invested their credibility promoting it, with the opposition then being painted as foolish or worse (and henceforth, unelectable).

While sometimes wholly false, there is usually enough of an element of truth in fall-back propaganda to hook regime adversaries into wasting endless amounts of time chasing phony clues. On occasion, such as when there is a severely elevated risk of an official narrative collapsing (e.g., in the case of felony accusations piling up against a highly valued cog within the Shadow Party network), the disseminated fall-back propaganda may even be entirely true but serve to deflect attention from far more serious and damning wrongdoing. The guilty party is then slapped on the wrist over the easily-proven minor charges while reporting of his capital crimes is spiked and swept under the rug.

The ruling elite are thus able to exercise nearly complete control over all "official" information the average citizen encounters. By the time it is belatedly realized that the propaganda is either erroneous or trivial, too much time has elapsed. In this manner, the Shadow Party is able to rule without expending inordinate effort suppressing dissent. This has become especially important since the advent of the internet age has rendered leaving a trail of corpses less of a viable option than it was in years past.

An environment of saturation fall-back propaganda successfully deployed creates an oxymoric fictional reality in which fake scandals and "conspiracies" supplant real ones, and almost nothing that an individual thinks he has finally figured out is actually true. A yin of official press allegations and yang of alternative media bury the listener under an avalanche of widely diverse theories to the point that jaded veteran observers rationally conclude that the truth can only be that one thing that none of them are willing to talk about.

To "fall back" means to retreat; in the context of fall-back propaganda, it is an autotomy to misdirect.

Fall-back propaganda is intended for critics and other suspicious sorts who aren't "buying" official narratives (i.e., mainstream propaganda); its purpose is to get them to waste all of their time chasing false or expired leads or participating in co-opted phony opposition groups that repeatedly sell them out. There is a finite amount of time in each day, and the more of it spent on distraction, the less is available to encounter the truth, whether by deliberate search or happenstance. (The most odious forms of fall-back propaganda are formulated to make those who swallow it permanently unelectable.)

Here's a typical example, in which the US establishment press is overly generous in providing a "bad" (narratively-speaking) group with an exceptional amount of free publicity, enough to make you go "Hmmm...":

Don't your spidey senses tingle when the Propaganda Ministry tries to herd you around? I know mine do.... 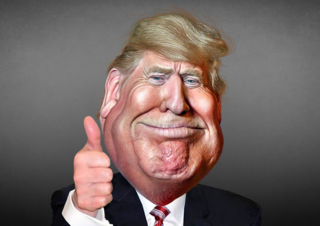 "Most of you wouldn't know your ass from a hole in the ground unless someone told you otherwise, and this uncritical naivete is why you swallowed your Deep State and fake anti-state media organ pretenses of hating and fearing my campaign promises to drain their swamp so much that they gave me around-the-clock free advertising[1] the moment I announced my candidacy in 2015 so that I could coast straight into the White House after only narrowly defeating some crippled witch with skeletons packed into her closet like cordwood. It's truly amazing how these things just randomly happen to swell guys like me when I could have instead disappeared in a poof of smoke after New Hampshire had they instead decided not to cover me at all like those shunned bastards whose names you've already forgotten. The reality is that elections are rigged, and have been for quite some time to keep the plunder trains running smoothly. Guys like me? We're actors now, and are not permitted to get anywhere near real power without decades' worth of loyalty-tests resulting in only those aspirants judged most trustworthy to follow script being anointed. (This is also why there's no incentive for us to assassinate each other, as was once popular, in case you're wondering why that never happens anymore.) Periodic voting remains as a national past-time to keep you both entertained and pacified, like a cat fascinated by a laser-pointer."

This same story was repeated across every news entity, generating what would have otherwise cost the NRA multiple tens of millions of dollars to purchase as ad-time. So what is really going on? —It is a beautiful example of pack journalism working to maintain political kayfabe, or a phony narrative replete with heroes and villains into which the reader's mind is safely shunted such that, no matter what proffered "side" he chooses to gravitate to and agitate over, the goals of his rulers are accomplished either way. It's a given that a large fraction of the article's readership support government control of property and that their sentiments regarding private firearms ownership will be cemented further by the article,—but the article is actually written for its OTHER readers: those conservatives, who must be fooled in a different way.

That's the fantasy; here's the reality:

—Offensive usage: "This person is threatening our interests; accuse him of a crime! Or just #MeToo him! He'll be found not-guilty after he's lost the election or resigned! Or maybe he goes to jail anyway, like we care (do we control a judge in that district?)."
—Defensive usage: "Our man is in trouble; let's dog and pony a blowjob scandal to show we mean business about punishing perjury while he smirks on camera like a total alpha. Alternatively, we'll feed conspiracies alleging he's screwing kids or trafficking sex-slaves or something else so preposterous as to inoculate him from further criticism and permanently impugn the credibility of anyone stupid enough to relay them."
—Spurious sexual scandals may be employed as a demonstration of power and control over narratives, e.g., for example a politically important cog who is obviously and even incessantly guilty of far worse being "punished" when the lightest of possible allegations are pursued by controlled-opposition "heels".

—Offensive: "Drone-strikes are killing our covert proxy army; this must stop! Trot out the bodies on CNN!", "If it bleeds, it leads!", "Never let a tragedy go to waste!", "Gun violence!" "Nukes! Panic! Aauggghhhh!"
—Defensive: "Police have a tough job!", "We must arm teachers to protect the kids!", "The NRA defends your 2nd Amendment rights!"

—Offensive usage: "Fomenting malicious envy is necessary to instigate class conflict!"
—Defensive: "Our man is in trouble; let's float press stories accusing him of doing something utterly mundane and non-criminal, such as being concerned with profit if he is in business or of spending tax-money if he is a Congressman. Our media wing pretends to be 'out to get him' while talking about nothing important. Get the rubes excited over ten-million-dollar "bridges to nowhere". *Trillions* will fly into our pockets while they obsess over infinitesimals."

The Crime of the Blackest Dye

One asset after another

Will the real commies please stand up?