From Infogalactic: the planetary knowledge core
Jump to: navigation, search
This article is about the German campaign against Poland. For the 1943 campaign in Yugoslavia (also codenamed Fall Weiss), see Battle of the Neretva. 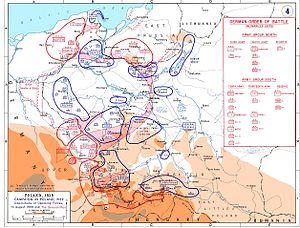 Dispositions of opposing forces, August 31, 1939, and the German plan of operation

The origins of the plan went back to 1928 when Werner von Fritsch started working on it.[2] Fall Weiss was developed primarily by Günther Blumentritt and Erich von Manstein while the two were serving as staff officers under General Gerd von Rundstedt with Army Group South in Silesia.

The plan called for a start of hostilities before the declaration of war. German units were to invade Poland from three directions:

All three assaults were to converge on Warsaw,[3] while the main Polish army was to be encircled and destroyed west of the Vistula River.

Fall Weiss was initiated on 1 September 1939, and was the first European military operation of World War II.

Alongside Fall Weiss ("Case White"), German strategists prepared other variants of the plan: