The Siege of Antwerp took place during the Eighty Years' War from July 1584 until August 1585. At the time Antwerp was not only the largest Dutch city but was also the cultural, economic and financial centre of the Seventeen Provinces and of north-western Europe. On 4 November 1576, unpaid Spanish soldiery mutinied: they plundered and burnt the city during what was called the Spanish Fury. Thousands of citizens were massacred and hundreds of houses were burnt down. As a result, Antwerp became even more engaged in the rebellion against the rule of Habsburg Spain. The city joined the Union of Utrecht (1579) and became the capital of the Dutch Revolt, which no longer was merely a Protestant rebellion but had become a revolt of all Dutch provinces.

Relieved from the great battles with the Ottomans in the Mediterranean, Philip II of Spain turned his attention back to the uprising in the Low Countries and in 1579 sent Alessandro Farnese, Duke of Parma to head his army in Flanders to regain control over Flanders, Brabant and the United Provinces. When the siege of Antwerp began (1585) most of the County of Flanders and the Duchy of Brabant, including Brussels, had been recaptured in the preceding year. The army of Flanders had been reinforced in the previous years, both in quantity and quality, and in 1585 it had 61,000 men under arms. 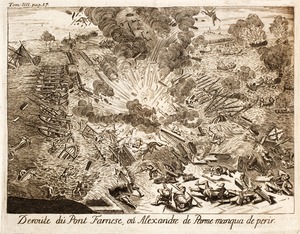 During the recapture of Flanders and Brabant, Parma improved the logistics of the Spanish army in Flanders by further investing in what is dubbed the "Spanish Route." It was a main road leading north from Habsburg holdings in Northern Italy into the Low Countries, protected by forts built at strategic intervals, to provide the army with a reliable flow of supplies. When the siege of Antwerp began Parma's army was well supplied. The first stage of the siege saw encirclement lines constructed around Antwerp and forts built along the Scheldt estuary.

The second stage consisted of commencing a long siege of Antwerp and constructing a bridge across the Scheldt, effectively closing off the city's waterways. The bridge, a unique feat of siege engineering at its time, consisted of a strong fort (reinforced with cannons) on each side of the Scheldt with a bridge of connected pontoons (paintings show sizable rowing boats) running between them. (This bridge is believed to have been 730m long.)

In response to the closure of the Scheldt by this bridge, the Dutch flooded the lowlands adjacent to the Scheldt, effectively submerging most roads in scattered areas and leaving Spanish forts either flooded or isolated on small islands. Despite the Dutch using these floodplains to try to regain control over the Scheldt (using low draft oar and sail boats with small cannon emplacements on them), the Spanish position largely held firm, as many of the Spanish forts had been equipped with cannon and high quality troops. Several attempts were made by the Dutch to steer "fire ships" into the Spanish pontoon bridge, but the troops stationed in the adjacent forts managed to push them off course with pikes - though with heavy loss of life when the fire ships exploded. 800 Spaniards are said to have been killed, Caspar de Robles being one of the casualties.

At one time, the rebels sent the Finis Bellis ("End of War"), a huge floating platform into which they put great hope, against the bridge, but the mission failed miserably. In the end the Dutch abandoned their efforts, considering Antwerp a lost cause.

On 17 August 1585, Antwerp surrendered. After the siege, the Dutch fleet on the river Scheldt was kept in position, blocking the city's access to the sea and cutting it off from international trade. Parma stationed experienced Castilian troops within Antwerp to make sure the city would not fall into enemy hands. The moderateness of Parma's demands and the behaviour of his troops were a complete surprise given the bloodiness of the siege and the rampage of 1576: Parma issued strict orders not to sack the city and the Spanish troops behaved impeccably, while Antwerp's Protestant population was given four years to settle their affairs before leaving.[1] Some returned to Roman Catholicism but many moved north and ended what had been a golden century for the city. Of the pre-siege population of 100,000 people, only 40,000 remained. Many of Antwerp's skilled tradesmen were included in the Protestant migration to the north, laying the commercial foundation for the subsequent "Dutch Golden Age" of the northern United Provinces. The blockage of the Scheldt to shipping remained in place and prevented the city recovering its former glory. It was maintained for the next two centuries and was an important and traumatic element in the history of relations between the Netherlands and what was to become Belgium.