False Dmitriy I (Russian: Лжедмитрий, tr. Lzhedmitrii),[1] historically known as Pseudo-Demetrius I, was the Tsar of Russia from 21 July 1605 until his death on 17 May 1606 under the name of Dimitriy Ioannovich (Димитрий Иоаннович). He is sometimes referred to under the title of Dmitriy I. According to historian Chester L. Dunning, Dmitriy I was, "the only Tsar ever raised to the throne by means of a military campaign and popular uprisings."[2]

He was one of the "impostors" (самозванец, samozvanets) who claimed during the Time of Troubles to be the youngest son of Ivan the Terrible, tsarevitch Dmitriy Ivanovich, who had supposedly escaped a 1591 assassination attempt. It is generally believed that the real Dmitriy died in Uglich and that this False Dmitriy's real name was Grigoriy Otrepyev, although this is far from certain.

False Dmitriy I entered history circa 1600, when he made an impression on Patriarch Job of Moscow with his learning and assurance. Tsar Boris Godunov, however, ordered him to be seized and examined, whereupon he fled to Prince Constantine Ostrogski at Ostroh, then in the Polish–Lithuanian Commonwealth, and subsequently entered the service of another polonized Ruthenian family, the Wisniowieckis. Princes Adam and Michał Wiśniowiecki found his story to be convincing, as to who he purported to be, and it gave them an opportunity to get involved in the political turmoil that was transpiring in Muscovy.

There were vague rumours that Dmitriy was an illegitimate son of the Polish king, Stefan Batory, who had reigned from 1575 to 1586. According to a later tale, Dmitriy blurted out his identity when his master had slapped him in anger. Dmitriy himself claimed that his mother, the widow of Tsar Ivan, had anticipated Boris Godunov's assassination attempt and had given him into the care of a doctor who hid with him in Russian monasteries. After the doctor died, he had fled to Poland where he worked as a teacher for a brief time before coming to the service of Wisniowiecki. A number of people who had known Tsar Ivan later claimed that Dmitriy did resemble the young tsarevitch. Dmitriy displayed aristocratic skills like riding and literacy and spoke both Russian and Polish. Depictions of Dmitriy usually show him as being clean-shaven with slicked hair, an unusual look for his era.

Regardless of whether they believed the tale of Dmitriy, Adam Wiśniowiecki, Roman Różyński, Jan Sapieha and several other Polish noblemen decided to support him against Tsar Boris Godunov. In March 1604, Dmitriy visited the royal court of Sigismund III Vasa in Kraków. The king provisionally supported him, but did not promise any direct aid to help him on his way to the throne of Russia. To attract the support of powerful Jesuits, Dmitriy publicly converted to Roman Catholicism on 17 April 1604 and convinced the papal nuncio Claudio Rangoni to back up his claim. At that time he also met Marina Mniszech, a Polish noblewoman, who was a daughter of Jerzy Mniszech. He asked for her hand and was promised it in return for giving to the Mniszech family the Russian towns of Pskov, Novgorod, Smolensk and Novhorod-Siverskyi.

Way to the Russian throne 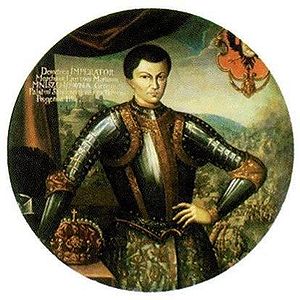 A Polish likeness of False Dmitry.

When the Tsar Boris heard about the pretender, he claimed that the man was just a runaway monk called Grigory Otrepyev (born Yuri Otrepyev; Grigory was the name given at the monastery), although on what information he based this claim is unclear. Regardless, his support began to wane, especially when he tried to spread counter-rumors. Some of the Russian boyars also claimed to accept Dmitriy's claim because it gave them legitimate reason not to pay taxes to Boris.

Dmitriy attracted a number of followers, formed a small army, and gained the support of Commonwealth magnates who gave him approximately 3500 soldiers from their private armies. With them he rode to Russia in June 1604. Enemies of Boris, including the southern Cossacks, joined his forces on his way to Moscow. Dmitriy's forces fought two engagements with reluctant Russian soldiers; they won the first, capturing Chernigov (modern Chernihiv), Putivl (Putyvl), Sevsk, and Kursk but badly lost the second and nearly disintegrated. Dmitriy's cause was only saved when the news of the sudden death of Tsar Boris (13 April 1605) reached the troops.

This removed the last barrier to the pretender's further progress. Russian troops began to defect to Dmitriy's side, and on 1 June boyars in Moscow staged a palace coup. The boyars imprisoned the newly crowned tsar, Feodor II, and his mother and later killed them. On 20 June Dmitriy made his triumphal entry into Moscow, and on 21 July he was crowned tsar by a new Patriarch of his own choosing, the Greek Patriarch Ignatius. 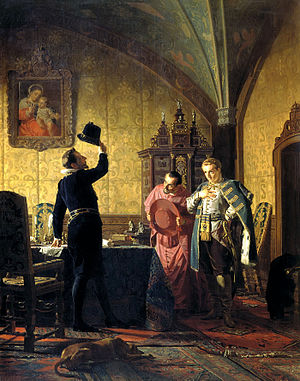 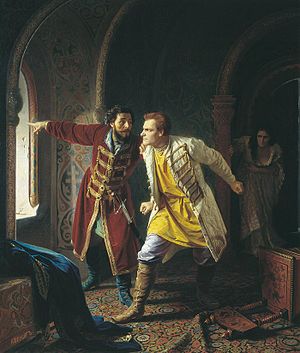 At first the new tsar tried to consolidate his power by visiting the tomb of Tsar Ivan the Terrible and the convent of his widow Maria Nagaya, who accepted him as her son. The Godunov family was executed, with the exception of Princess Xenia Godunova, whom he took as his concubine for five months. In contrast, many of the noble families exiled by Godunov – such as the Shuiskys, Golitsins and Romanovs – were granted the pardon of Tsar Dmitriy and allowed to return to Moscow. Filaret (Feodor Romanov) he appointed as metropolitan of Rostov. Patriarch Job of Moscow, who did not recognize him as the new tsar, was sent to exile.

Dmitriy planned to introduce a series of political and economical reforms. He restored Yuri's Day, the day when serfs were allowed to move to another lord, to ease the conditions of peasantry.

In foreign policies, Dmitriy sought for an alliance with the Polish–Lithuanian Commonwealth and with the Roman Pontiff. He planned a war against the Ottoman Empire and had ordered the mass production of firearms. In his correspondence, he referred to himself as the "Emperor of Russia", a century before Tsar Peter I, though this title was not recognized at the time.

On 8 May 1606, Dmitriy married Marina Mniszech in Moscow. It was the usual practice that when a Russian Tsar married a woman of another faith, she would convert to Eastern Orthodox Christianity. It was rumored that Dmitriy had obtained the support of Polish King Sigismund III Vasa and Pope Paul V by promising to reunite the Russian Orthodox Church and the Holy See. It was allegedly for this reason that Tsarina Marina did not convert to the Orthodox faith.

This angered the Russian Orthodox Church, the boyars, and the population alike and increased the support of his enemies. The boyars, headed by Prince Vasily Shuisky, began to plot against him, accusing him of spreading Roman Catholicism, Lutheranism, and sodomy. They gained popular support, especially as Dmitriy surrounded himself with foreigners and openly flouted Russian customs. According to Russian chronicler Avraamy Palitsyn, Dmitriy further enraged many Muscovites by permitting his Catholic and Protestant soldiers, whom the Russian Church regarded as heretics, to pray inside of Orthodox churches.[3]

Prince Shuisky and his adherents spread word that Tsar Dmitriy was about to order his Polish retainers to lock the city gates and massacre the people of Moscow. Whether such orders existed or not, Palitsyn's chronicle believed them to be true.[4] In the morning of 17 May 1606, ten days after his marriage to Tsarina Marina, a massive number of boyars and commoners stormed the Kremlin. Tsar Dmitriy tried to flee through a window but broke his leg in the fall. He fled to a bathhouse and attempted to disappear into the crowd before being dragged out by the conspirators, who killed him before he could appeal to the crowd.[5] The body was put on display and then cremated, the ashes reportedly shot from a cannon towards Poland. According to Palitsyn, Tsar Dmitriy's death was followed by a massacre of his supporters. Palitsyn boasted in his chronicle that, "a great amount of heretical blood was spilled on the streets of Moscow."[6]

Dmitriy's reign had lasted a mere ten months. Prince Shuisky then took his place as Tsar Vasili IV of Russia. However, two further impostors later appeared, False Dmitriy II and False Dmitriy III. Both of them were accepted by Tsarina Marina as her fallen husband.