From Infogalactic: the planetary knowledge core
Jump to: navigation, search
This article is about the Shakespearean character. For other uses, see Falstaff (disambiguation).

Sir John Falstaff is a fictional character who appears in three plays by William Shakespeare. In the two Henry IV plays, he is a companion to Prince Hal, the future King Henry V. In The Merry Wives of Windsor, he is the buffoonish suitor of two married women.

Though primarily a comic figure, Falstaff still embodies a kind of depth common to Shakespeare's major characters. A fat, vain, boastful, and cowardly knight, he spends most of his time drinking at the Boar's Head Inn with petty criminals, living on stolen or borrowed money. Falstaff leads the apparently wayward Prince Hal into trouble, and is ultimately repudiated after Hal becomes king.

In Act II, Scene III of Henry V, his death is described by Mistress Quickly in terms that reference Plato's description of the death of Socrates.

Falstaff has since appeared in other media, notably in operas by Giuseppe Verdi, Ralph Vaughan Williams and Otto Nicolai. The operas focus on his role in The Merry Wives of Windsor. 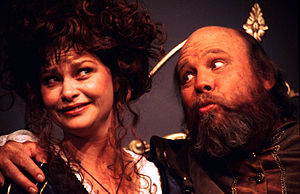 Mistress Page and Falstaff in The Merry Wives of Windsor, staged by Pacific Repertory Theatre at the Golden Bough Playhouse in Carmel, CA, in 1999

He appears in the following plays:

His death is mentioned in Henry V but he has no lines, nor is it directed that he appear on stage. However, many stage and film adaptations have seen it necessary to include Falstaff for the insight he provides into King Henry V's character. The most notable examples in cinema are Laurence Olivier's 1944 version and Kenneth Branagh's 1989 film, both of which draw additional material from the Henry IV plays. 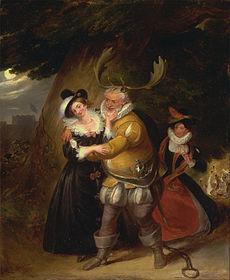 The character is known to have been very popular with audiences at the time, and for many years afterwards. According to Leonard Digges, writing shortly after Shakespeare's death, while many plays could not get good audiences, "but let Falstaff come, Hal, Poins and the rest, you scarce shall have a room".[1] 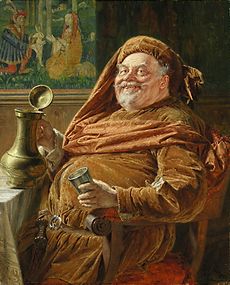 It is generally believed that Shakespeare originally named Falstaff "John Oldcastle", and that Lord Cobham, a descendant of the historical John Oldcastle, complained, forcing Shakespeare to change the name. There is both textual and external evidence for this belief. Shakespeare's Henry IV plays and Henry V adapted and developed the material in an earlier play called The Famous Victories of Henry V, in which Sir John "Jockey" Oldcastle appears as a dissolute companion of the young Henry. In the published version of Henry IV, Part 1, Falstaff's name is always unmetrical, suggesting a name change after the original composition; Prince Hal refers to Falstaff as "my old lad of the castle" in the first act of the play; the epilogue to Henry IV, Part 2, moreover, explicitly disavows any connection between Falstaff and Oldcastle, a dancer declaring: "...where, for anything I know, Falstaff shall die of a sweat, unless already 'a be killed with your hard opinions; for Oldcastle died a martyr and this is not the man".[2]

The historical Oldcastle was unlike Falstaff; in particular, he was a Lollard who was executed for his beliefs, and he was respected by many Protestants as a martyr. In addition to the anonymous The Famous Victories of Henry V, in which Oldcastle is Henry V's companion, Oldcastle's history is described in Raphael Holinshed's Chronicles, Shakespeare's usual source for his histories.

It is not clear, however, if Shakespeare characterized Falstaff as he did for dramatic purposes, or because of a specific desire to satirize Oldcastle or the Cobhams. Cobham was a common butt of veiled satire in Elizabethan popular literature; he figures in Ben Jonson's Every Man in His Humour and may have been part of the reason The Isle of Dogs was suppressed. Shakespeare's desire to burlesque a hero of early English Protestantism could indicate Catholic sympathies, but Henry Brooke, 11th Baron Cobham was sufficiently sympathetic to Catholicism that in 1603, he was imprisoned as part of the Main Plot to place Arbella Stuart on the English throne, so if Shakespeare wished to use Oldcastle to embarrass the Cobhams, he seems unlikely to have done so on religious grounds.

The Cobhams appear to have intervened while Shakespeare was in the process of writing either The Merry Wives of Windsor or the second part of Henry IV. The first part of Henry IV was probably written and performed in 1596, and the name Oldcastle had almost certainly been allowed by Master of the Revels Edmund Tilney. William Brooke, 10th Baron Cobham may have become aware of the offensive representation after a public performance; he may also have learned of it while it was being prepared for a court performance (Cobham was at that time Lord Chamberlain). As father-in-law to the newly widowed Robert Cecil, Cobham certainly possessed the influence at court to get his complaint heard quickly. Shakespeare may have included a sly retaliation against the complaint in his play The Merry Wives of Windsor (published after the Henry IV series). In the play, the paranoid, jealous Master Ford uses the alias "Brook" to fool Falstaff, perhaps in reference to William Brooke. At any rate, The name is Falstaff in the Henry IV, Part 1 quarto, of 1598, and the epilogue to the second part, published in 1600, contains this clarification:

"One more word, I beseech you. If you be not too much cloyed with fat meat, our humble author will continue the story, with Sir John in it, and make you merry with fair Katharine of France where, for any thing I know, Falstaff shall die of a sweat, unless already a' be killed with your hard opinions; for Oldcastle died a martyr, and this is not the man."

The new name "Falstaff" probably derived from the medieval knight Sir John Fastolf (who may also have been a Lollard). The historical John Fastolf fought at the Battle of Patay against Joan of Arc, which the English lost. Fastolf's previous actions as a soldier had earned him wide respect, but he seems to have become a scapegoat after the debacle. He was among the few English military leaders to avoid death or capture during the battle, and although there is no evidence that he acted with cowardice, he was temporarily stripped of his knighthood. Fastolf appears in Henry VI, Part 1 in which he is portrayed as an abject coward. In the First Folio his name is spelled "Falstaffe", so Shakespeare may have directly appropriated the spelling of the name he used in the earlier play.

It has been suggested that the dissolute writer Robert Greene may also have been an inspiration for the character of Falstaff. This theory was first proposed in 1930 and has recently been championed by Stephen Greenblatt.[3] Notorious for a life of dissipation and debauchery somewhat similar to Falstaff, he was among the first to mention Shakespeare in his work (in Greene's Groats-Worth of Wit), suggesting to Greenblatt that the older writer may have influenced Shakespeare's characterization. 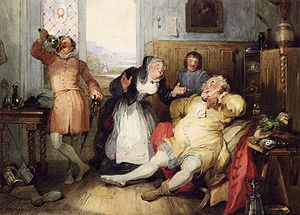 Falstaff and Mistress Quickly from The Merry Wives of Windsor, Francis Philip Stephanoff, circa 1840

In Stratford-upon-Avon, the owners of Shrieves House, the former Three Tunns Tavern and now a museum, claim William Shakespeare based the character Falstaff on William Rogers, one of the Sargeants of the mace and close friend of the Shakespeares.[4] This was suggested in circumstantial research by Petra Rees in her book The Shrieves House.[5]

There are several works about Falstaff, inspired by Shakespeare's plays: