The Fancy was Henry Every's ship, and was commanded by him between May 1694 to late 1695, when he retired from piracy and the fate of the Fancy becomes unknown.

The Fancy was initially a 46-gun privateer named Charles II - after Charles II of Spain - in Spanish service, commanded by a Captain Gibson, and was anchored at A Coruña, Spain. On 7 May 1694, Henry Every and a few other conspirators organised and carried out a successful mutiny and, setting Captain Gibson ashore, left A Coruña for the Cape of Good Hope. At this time, the Charles II was renamed Fancy.

Upon arriving at the Cape, Every sailed to the island of Johanna (Anjouan) in the Comoros Islands, where he had the Fancy careened - removing barnacles and weed from the section of the hull that was permanently below water, increasing her speed. He also had the Fancy razeed, intentionally removing parts of the ship's superstructure in order to increase her speed. Following this work, the Fancy became one of the fastest ships active in the Indian Ocean, and Every used this speed to attack and take a French pirate ship, looting the vessel and recruiting approximately 40 of the crew to his own ship, leaving him with a total complement of around 150. 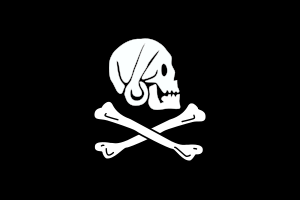 Flag attributed to Henry Every

Every continued to be active in the Indian Ocean where he worked alongside other famous pirates of his time, including Thomas Tew. Most notable in his captures was the Ganj-I-Sawai, a Mughal ship under the command of Ibrahim Khan during Emperor Aurangzeb's era. Mounting 62 cannons and four to five hundred musket-armed guards, cannon fire from the Fancy was instrumental in Every's victory - the first salvo caused a cannon to explode, and a number of gunners were killed. Every's career ended when the crew returned to Nassau, in the Bahamas, where Every returned to Britain aboard the sloop Isaac.

Although the fate of the Fancy is unknown, it was rumored that Every gave her to the governor of Nassau as bribe.