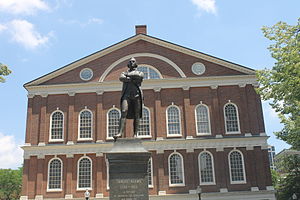 Samuel Adams, described on the 1880 statue by Anne Whitney at Faneuil Hall as "A Stateman: Incorruptible and Fearless"

Faneuil Hall (/ˈfænjəl/ or /ˈfænəl/; previously /ˈfʌnəl/), located near the waterfront and today's Government Center, in Boston, Massachusetts, has been a marketplace and a meeting hall since 1743. It was the site of several speeches by Samuel Adams, James Otis, and others encouraging independence from Great Britain. Now it is part of Boston National Historical Park and a well-known stop on the Freedom Trail. It is sometimes referred to as "the Cradle of Liberty".[2]

In 2008, Faneuil Hall was rated number 4 in America's 25 Most Visited Tourist Sites by Forbes Traveler.[3] 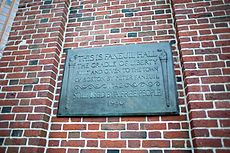 After the project of erecting a public market house in Boston had been discussed for some years, merchant Peter Faneuil offered, at a public meeting in 1740, to build a suitable edifice at his own cost as a gift to the town. There was a strong opposition to market houses, and although a vote of thanks was passed unanimously, his offer was accepted by a majority of only seven. Funded in part by profits from slave trading,[4] the building was begun in Dock Square in September of the same year.[5] It was built by artist John Smibert in 1740–1742 in the style of an English country market, with an open ground floor serving as the market house, and an assembly room above. According to Sean Hennessey, a National Park Service spokesman, some of Boston's early slave auctions were located near Faneuil Hall.[6] 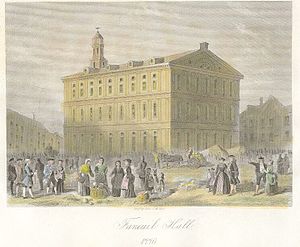 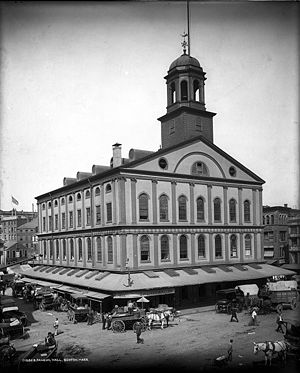 In 1761 the hall was destroyed by fire, nothing but the brick walls remaining. It was rebuilt by the town in 1762. In 1775, during the British occupation of Boston, it was used for a theatre.[5]

In 1806, the hall was greatly expanded by Charles Bulfinch, doubling its height and width and adding a third floor. Four new bays were added, to make seven in all; the open arcades were enclosed, and the cupola was moved to the opposite end of the building. Bulfinch applied Doric brick pilasters to the lower two floors, with Ionic pilasters on the third floor. This renovation added galleries around the assembly hall and increased its height. Neighboring Quincy Market was constructed in 1824-26. Faneuil Hall was entirely rebuilt of noncombustible materials in 1898–1899.

On October 9, 1960 the building was designated a National Historic Landmark and added to the National Register of Historic Places a number of years later.[7] The ground floor and basement were altered in 1979. The Hall was restored again in 1992.

Faneuil Hall is now part of a larger festival marketplace, Faneuil Hall Marketplace, which includes three long granite buildings called North Market, Quincy Market, and South Market, and which now operates as an indoor/outdoor mall and food eatery. It was designed by Benjamin Thompson and Associates and managed by Ashkenazy Acquisition Corp.; its success in the late 1970s led to the emergence of similar marketplaces in other U.S. cities.

On Friday in early August 1890, one of the first black Republican legislators of Boston, Julius Caesar Chappelle, made a speech "At the Cradle of Liberty" in support of the Federal Elections bill that would help give blacks the right to vote. Chappelle was a Boston legislator from 1883-1886. The Faneuil Hall event was covered by the media in the United States, and the speech by Chappelle appeared in an August 9 1890 article, "At the Cradle of Liberty, Enthusiastic Endorsement of the Elections Bill, Faneuil Hall again Filled with Liberty Loving Bostonians to Urge a Free Ballot and Fare Count..." on the front page of The New York Age newspaper on Saturday, August 9, 1890. [8]

On April 11, 2006, Governor Mitt Romney signed Massachusetts' historic healthcare into law with a fife and drum band in Faneuil Hall before 300 ticketed guests. [10]

On October 30, 2013, President Barack Obama delivered a defense of the Affordable Care Act from the same spot where Governor Mitt Romney signed his state's expansion of healthcare in 2006. [11]

The Headquarters of the Ancient and Honorable Artillery Company of Massachusetts has been in Faneuil Hall since 1746, currently on the 4th floor.

It is also still used for political debates between Massachusetts candidates as well as political shows, such as The O'Reilly Factor.

Though Faneuil is a French name, it is anglicized as /ˈfænəl/ or /ˈfænjəl/.[13] There is some evidence that it was pronounced quite differently in Colonial times, as in funnel. Peter Faneuil's gravestone is marked "P. Funel," although the inscription was added long after his burial. (The stone originally displayed only the Faneuil family crest, not his surname.)

Boston area locals will often use the term "Faneuil Hall" or "Fanueil" to refer to the entire surrounding neighborhood, particularly as a landmark for its vibrant nightlife.

The bell was repaired in 2007 by spraying the frozen clapper with WD-40 over the course of a week and attaching a rope. Prior to this repair, the last known ringing of the bell with its clapper was at the end of World War II, in 1945, though it had since been rung several times by striking with a mallet.[14]

The area between the eastern end of Faneuil Hall and Congress Street is part of Boston National Historical Park. In this landscape is a 19th-century sculpture of Samuel Adams[18] created by sculptor and poet Anne Whitney. The granite plaza surface is marked for 850 feet (260 m) with the approximate location of the early Colonial shoreline c. 1630. The street layout and building plot plan designations from an 1820 map are shown by etched dashed lines and changes from pink granite to grey granite paving slabs. The shoreline marking artwork entitled, A Once and Future Shoreline, is made with etched silhouettes of seaweed, sea grass, fish, shells and other materials found along a high tide line.[19]