From Infogalactic: the planetary knowledge core
Jump to: navigation, search
For the hip-hop group, see FannyPack. 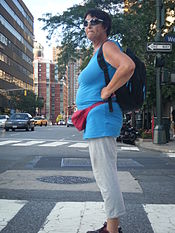 The name "fanny pack" is derived from the way they were traditionally worn facing the rear above the buttocks, for which "fanny" is a slang term in the United States. Despite the name, many users do not wear fanny packs on their rear because they are easier to pickpocket and harder to access. In the Anglosphere outside of North America, other names are used since the word "fanny" may mean vulva,[1] rather than buttocks.

Many people consider the fanny pack a sure mark of an out-of-place tourist, evoking the traditional tourist stereotypes known around the world, or regard them as an item worn by unfashionable or older people. For example, "Weird Al" Yankovic mocks the wearing of fanny packs in his song "White & Nerdy".

The handiness and ease of opening of fanny packs has also resulted in them being used as holsters for handguns. Many manufacturers make fanny packs that are designed for concealed carry.[2] Some military and law enforcement units also utilize fanny packs to carry additional equipment, such as first aid, night vision, markers, etc.

Calling them "belted satchels" or "hands-free bags", several designer labels sought to bring the accessory back into vogue in early 2011, by offering stylish and expensive designs selling for as much as $1995.[3][4][5]

A fanny pack is one variation of a buffalo pouch because buffalo pouches may also be worn on the wrist or carried on the front of the chest via a neck strap or lanyard.[6] Native Americans used buffalo pouches instead of sewing pockets into their clothing.