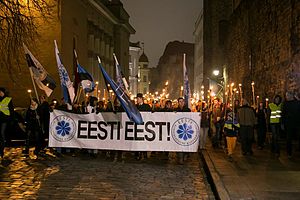 Far-right nationalists on a rally in Tallinn, Estonia in 2015

The term far-right politics is used to describe right-wing political ideologies and ideological movements that are perceived to be to the right of the mainstream centre right on the traditional left-right political spectrum. The term extreme right may be used as a synonym or to refer to an "extreme" subset of the far right. Historically, the term "far right" was used to describe representatives and supporters of the old order, such as monarchists, theocrats and reactionaries.

In modern times, however, the term, and derivations such as "extreme right", seems to be mainly used by critics, who often seem to use it very narrowly as a pejorative and a synonym for pro-white ideologies such as white pride, white nationalism, white separatism, and Eurocentrism, all of which they refer to as forms of "white supremacy". In a very bizarre case of guilt by association, it has also been used, in more recent years, to describe groups such as the Proud Boys, which itself is a multicultural organization and thus not "white supremacist",[1] as well as some recent anti-globalization movements, such as the Freedom Convoy 2022. A double standard is most organizations that cater specifically for non-whites not being referred to by these very critics as "far left" and/or terms such as "black supremacist" (ie, Black Lives Matter).

Far-right politics commonly include ultranationalism, anti-communism, and nativism.[2] Often, the term "far right" is erroneously applied to fascists and National Socialists when statist is a more correct term for such highly authoritarian groups,[3][4][5][6][7] and major elements of fascism have been deemed clearly statist, such as its belief that supposedly superior people have the right to dominate society while purging allegedly inferior elements, and—in the case of Nazism—genocide of people deemed to be inferior.[8] Supporters of these ideologies also see the "far right" claim as an association fallacy and have often argued for a Third Position placement. Claims that superior people should proportionally have greater rights than inferior people are sometimes associated with the far right.[9] The far right has historically favoured an elitist society based on belief of the legitimacy of the rule of a supposed superior minority over the inferior masses.[10] Far-right politics usually involves anti-immigration and anti-integration stances towards groups that are deemed inferior and undesirable.[11] Concerning the socio-cultural dimension (nationality, culture and migration), one far-right position could be the view that certain ethnic, racial or religious groups should stay separate, and that the interests of one’s own group should be prioritised.[12]

File:EDL.jpg
An English Defence League demonstration in Newcastle, England. The placard reads "Shut down the Mosque".

According to Christina Liang, this "academic field is especially peculiar about its terminology. Each label carries with it a specific understanding of this family of political parties as well as a particular set of assumptions regarding their origins and electoral success".[13] In an extensive survey of the literature, academic Cas Mudde found 26 definitions of right-wing extremism that contained 57 different ideological features.[14] Alongside the theoretical debate concerning the nature of these parties there is also an empirical debate concerning who speaks for right-wing extremist parties and how to measure their ideology given that many reject the right-wing extremist label being applied to them.

One issue when it comes to terminology is whether parties should be labelled "radical" or "extreme",[15] a distinction that is made by the German Federal Constitutional Court when determining whether a party can be banned. Another question is the what the label "right" implies when applied to the extreme right, given that many parties labelled as right-wing extremist tended to advance neo-liberal and free market agendas as late as the 1980s but can now advocate economic policies more traditionally associated with the left, such as anti-globalisation, nationalisation and protectionism. One approach, drawing on the writings of Norberto Bobbio, argues that attitudes towards equality are what distinguish between left and right and therefore allow these parties to be positioned on the right of the political spectrum. There is also debate about how appropriate the labels fascist or neo-fascist are. According to Cas Mudde, "the labels Neo-Nazi and to a lesser extent neo-fascism are now used exclusively for parties and groups that explicitly state a desire to restore the Third Reich or quote historical National Socialism as their ideological influence".[15] 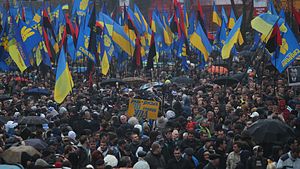 Cas Mudde identified five key features of the "extreme right" – nationalism, racism, xenophobia, anti-democracy and the belief in a strong state – based on the fact that they appear in 50% of the definitions of the extreme-right that he surveyed.[17] Mudde lists “nativism, authoritarianism, and populism” as core elements of populist radical right political parties and associated movements.[18] Mudde adds: "the terms neo-Nazism and to a lesser extent neo-fascism are now used exclusively for parties and groups that explicitly state a desire to restore the Third Reich (in the case of neo-fascism the Italian Social Republic) or quote historical National Socialism (fascism) as their ideological influence"[19]

According to Elisabeth Carter, the two defining features of a right-wing extremist party are: a rejection of fundamental human equality, which she asserts is what makes the party right-wing,[20] and a rejection of the fundamental democratic values of the state, which makes it extremist.[20]

Proponents of the horseshoe theory interpretation of the left-right spectrum identify the far-left and far-right as having more in common with each other as extremists than each have towards moderate centrists.[21]

From 1945 to the mid-1950s, statist parties of the fascist type were marginalised, their ideologies discredited due to the recent existence and defeat of National Socialism. Thus in the years immediately following World War II, the main objective of such parties was survival; achieving any political impact at all, was largely not expected.

From the mid-1950s to the 1970s, the populist protest phase emerged with sporadic electoral success. Statist and far-right parties during this period drew to them charismatic leaders whose profound mistrust of the political establishment led to an "us-versus-them" mind set: “us” being the nation's citizenry, “them,” the politicians and bureaucrats currently in-office; beginning in the 1980s, electoral success of far-right populist candidates made it possible to revitalize anti-immigration as a mainstream issue.

Jens Rydgren describes a number of theories as to why individuals support statist and far-right political parties, and the academic literature on this topic distinguishes between demand-side theories that have changed the "interests, emotions, attitudes and preferences of voters" and supply-side theories focusing on the programmes of parties, their organisation and the opportunity structures within individual political systems.[23] The most common demand-side theories are social breakdown thesis, the relative deprivation thesis, modernisation losers thesis and the ethnic competition thesis.[24] The rise of statist political parties has also been viewed as a rejection of post-materialist values on the part of some voters. This theory known as the reverse post-material thesis would blame left-wing and progressive parties for embracing a post-material agenda (including feminism and environmentalism) that alienates traditional working class voters.[citation needed] Another study argues that individuals that join far-right parties determine whether or not the party will develop into major political players or remain marginal.[25]

Early academic studies adopted psychoanalytic explanations for popular support for authoritarian right-wing parties. For example, the 1933 publication The Mass Psychology of Fascism by Wilhelm Reich argued the allegedly discredited theory that National Socialists came to power in Germany as a result of sexual repression.