From Infogalactic: the planetary knowledge core
Jump to: navigation, search
Not to be confused with Wells Fargo. 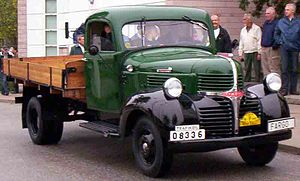 Fargo was a brand of truck originally produced in 1913 by the Fargo Motor Car Company. Dropped in 1922, the name was reintroduced for a line of trucks manufactured by the Chrysler Corporation after purchasing Fargo Motors in 1928. Later, Chrysler absorbed Dodge and started producing its truck line. Over time, Fargo trucks became rebadged Dodges, similar to the parallel sale by General Motors of its GMC and Chevrolet truck lines, with Fargo being the GMC equalivent.

The first Fargo trucks were built in Chicago by the Fargo Motor Car Company from 1913 until 1922. In 1928 Chrysler bought the business and created their own line of Fargo trucks.[1] Shortly after its creation, Chrysler also bought the Dodge Brothers Company, adding Dodge and Graham Brothers badged trucks to its product line.

From then on, Fargo trucks were almost identical to Dodge models, save for trim and name, and were sold by Chrysler-Plymouth dealers.

U.S. sales were discontinued in the 1930s, but the name Fargo was used until 1972 for Canada, and lived longer for other countries around the world under the Chrysler Corporation's badge engineering marketing approach. Most of the Fargo trucks and bus chassis sold in Argentina,[2] Finland, Australia, India, and other countries in Europe and Asia were made in Chrysler's Kew (UK) plant. Most were sold also under the Dodge, Commer or DeSoto names.

The Fargo brand still exists in Turkey, where Fargo and DeSoto trucks are currently made by Turkish manufacturer Askam, with no technical or business connection with Chrysler.[3]However Askam itself is the descendant of Chrysler Kamyon Montaj Fabrikası founded in 1964 at Istanbul, and currently produce the Fargo Fora.