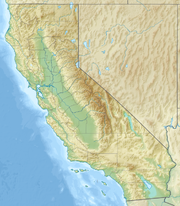 The Farmers Insurance Open is a professional golf tournament on the PGA Tour, played in the San Diego, California area in the early part of the season, known as the "West Coast Swing."

The tournament was noted for having singer-actor Andy Williams as a celebrity host from 1968 to 1988. It originated as the San Diego Open in 1952 and used that name in its title through 1985. Title sponsors were added in 1981, first with Wickes for two years, then three with Isuzu. Shearson Lehman Brothers became the title sponsors in 1986, replaced by Buick in 1992 and Farmers Insurance in 2010.[2] The event is organized by The Century Club of San Diego.

In 1968, the event began its present relationship with Torrey Pines Golf Course in La Jolla, a 36-hole public facility owned by the City of San Diego. In the current tournament set-up, players split the first 36 holes between the North and South Courses, then play the final 36 holes on the South Course. In 2008, the South Course hosted the U.S. Open, won by Tiger Woods in a playoff.[4]

1 Some players finished on Monday as a result of inclement weather. Snedeker had finished on Sunday.

Through 2016, eight players have won this tournament more than once: