From Infogalactic: the planetary knowledge core
Jump to: navigation, search
This article is about the Portuguese city. For other uses, see Faro.

Faro (Portuguese pronunciation: [ˈfaɾu]) is a municipality, southernmost city and seat of the district of the same name, in the Algarve region of southern Portugal.[2] With a population of 64,560 inhabitants in 2011 (with 50,000 inhabitants in the city proper), the municipality covers an area of approximately 202.57 square kilometres (78.21 square miles).[3] 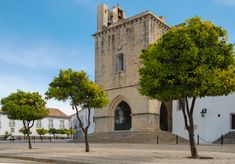 The medieval Cathedral of Faro 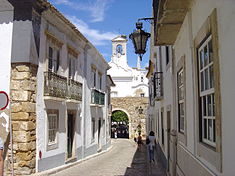 A view along the narrow streets of the old quarter

The Ria Formosa lagoon attracted human occupants from the Palaeolithic age until the end of pre-history. The first settlements date from the 4th century BC, during the period of Phoneician colonization of the western Mediterranean.[4] At the time, the area was known as Ossonoba, and was the most important urban centre of southern Portugal and commercial entrepot for agricultural products, fish and minerals.[4] Between the 2nd and 8th century, the city was under the domain of the Roman, than the Byzantine and later Visigoths, before being conquered by the Moors in 713.[4] From the 3rd century onwards and during the Visigothic period, it was the site of an Episcopal see of the Christian church.[4] The Byzantine presence perdured in the city walls towers that were built during the Byzantine presence. byzantine towers

With the advent of Moorish rule in the 8th century, Ossonoba retained its status as the most important town in the southwest corner of the Iberian Peninsula.[4] In the 9th century it became the capital of a short-lived princedom and was fortified with a ring of defensive walls.[4] At this time, in the 10th century,the name Santa Maria (Shantamariyyat al-Gharb in Arabic) began to be used instead of Ossonoba. By the 11th century the town was known as Santa Maria Ibn Harun.[4]

During the 500 years of Moorish rule, some Jewish residents of Faro made written copies of the Old Testament. One of Faro's historical names in Arabic is أخشونبة (ʼUḫšūnubaḧ). The Moors were defeated in 1249 by the forces of the Portuguese King Afonso III. With the decline of the importance of the city of Silves, Faro took over the role of administration of the Algarve area. 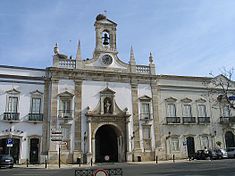 The civil governor's palace in Faro 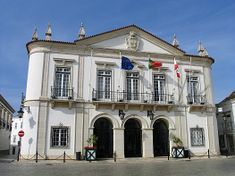 The building of the Câmara Municipal of Faro 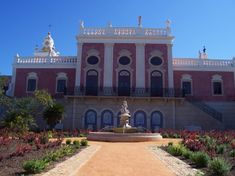 The Palace and gardens of the Estoi Palace

In the sequence of the Portuguese independence, in 1143, Afonso Henriques and his successors began an expansion into the southern Iberian territory (those occupied by the Moors).[4] Following the conquest by D. Afonso III, in 1249, the Portuguese referred to the town as Santa Maria de Faaron or Santa Maria de Faaram.[4] In the following years, the town became a prosperous position along the Algarve, due to its secure port and exploration of salt and produce. At the beginning of the Portuguese Age of Discovery, the town was positioned to be a commercial centre.[4]

In the 14th century, the Jewish community began to grow in importance. Samuel Gacon began printing the Pentateuco in Hebrew, the first book printed in Portugal in 1487.[4] The community Faro was always a distinct part of the region, with many artesans and merchants making part of the economy and city development.[4] But, this level of prosperity was interrupted in the 15th century, by an edict of Manuel I of Portugal (December 1496) expelling those who did not convert to Christianity: as a result, officially, there were no Jews in Portugal.[4] In the place of the Jewish village of Vila Adentro, the convent of Nossa Senhora da Assunção (patroned by Queen Leonor, wife of the King) was founded.[4] The same monarch promoted the development and expansion in the city in 1499: construction of a hospital, the Church of Espírito Santo (or Church of the Misericórdia), a customshouse and slaughterhouse, which were constructed near the shoreline.[4]

By 1540, John III of Portugal elevated Faro to the status of city, while (in 1577) the bishopric of the Algarve was transferred to Silves.[4] In 1596, the sack and fire provoked by English privateers, led by Earl of Essex, damaged the walls, churches and destroying other properties, including possessions.[4] At the same time, English troops seized the library of the Bishop of Faro, which eventually became part of University of Oxford's Bodleian Library.[4] Among the books stolen was the first printed book in Portugal: a Torah in local Hebrew (Judeo-Español), printed by Samuel Gacon at his workshop in Faro.[4]

Between the 17th and 18th century, was a period of expansion in Faro, supported by a series of walls, during the period of the Restoration Wars (1640-1668), and encompassing the semi-circular front to the Ria Formosa.[4] Yet, Lagos had become the capital of the historical province of Algarve in 1577 and remained so until 1756, the year following the destruction of much of the town by the 1755 Lisbon earthquake.[4] The earthquake damaged several areas in the Algarve, where a tsunami dismantled some coastal fortresses and, in the lowlands, razed homes. Almost all the coastal towns and villages of the Algarve were heavily damaged, except Faro, which was protected by the sandy banks of Ria Formosa lagoon.[4]

Since then Faro has been the administrative seat of the region.[4] During the earthquake, the town suffered damage to the churches, convents (specifically the Convent of São Francisco and Convent of Santa Clara) and episcopal palace, in addition to the walls, castle towers and bulwarks, barracks, guardhouses, warehouses, customshouses and prison.[4] 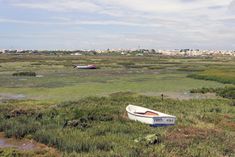 A boat stranded on the coast of Ria Formosa in Faro 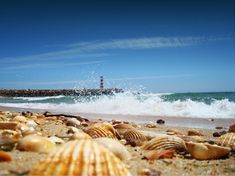 A shell-covered beach on Ilha Barreta

The municipality of Faro is divided into two distinct areas, the coastline, part of the Parque Natural da Ria Formosa (Nature Park of Ria Forma) and the barrocal, characterized by hills and valleys, populated with typical Algarvan vegetation.[5]

The Nature Park was created by Decree-Law 373/87, on 8 December 1987, and is considered one of the seven natural wonders of Portugal, with a beach that is approximately 7 kilometres (4 miles) from the downtown.[5] It includes the river and a lagoon system, interspersed with dunes, forming a small islands and peninsulas, that protect a large area of marshes, channels and islets.[5] The beaches in Faro as situated on the peninsula of Ancão and island of Culatra, along the corridor of the nature park.[6] The park is a rich and complex aquatic ecosystem, consisting of barrier islands, marshes and channels, comprising sandy shoreline that separate the waters of the Ria Formosa and Atlantic Ocean.[6] The beaches of Faro and Barrinha/Barra de São Luís, are located on the Ancão peninsula, the beach of Barreta on the Ilha Deserta, and the beaches of Farol and Culatra are located on the Ilha Culatra.[6] The barrier islands are separated by tidal flats and shallows, including (from west to east) the Barra do Ancão/Barra de São Luís, the Barra de Santa Maria/Barra do Farol and the Barra da Culatra/Barra da Armona (in the municipality of Olhão).[6]

Annually, many species of aquatic migratory birds, that transient northern Europe and that nest during the winter.[5] These include flamengos, terns, Pied avocet, Eurasion wigeon, Common chaffinch, among others.[5]

Within the town there are gardens and open spaces, among which are the Manuel Bivar Garden, Alameda João de Deus Garden and the Mata do Liceu.[5]

The variety of species and natural conditions results in the region being a popular eco-tourism zone, promoting birdwathcing, boating trips into the delta, kayaking along the Ria formosa, pedestrian trails and biking tours, accompanied by nature guides.[5] The municipality is crossed by the southern Ecovia do Algarve, a bicycling circuit that connects the Algarve to the rest of Europe.[5]

Administratively, the municipality is divided into 4 civil parishes (freguesias):[10]

Other locations named after Faro include 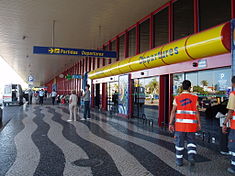 Part of the International Airport

A Alfa Pendular raillink in the main Faro railway station

It receives through the International Airport thousands of visitors annually, with 45 airlines serving this airport, including the largest number low-cost airlines.[14] In recent years the numbers of visitors travelling through the airport has increased as more and more low-cost airlines compete to offer cheap flights to the Algarve.[14] The transport facilities to and from Faro airport and the centre of Faro include taxicabs and a bus line.[14]

Centrally located, the town is served by Faro railway station, operated by Comboios de Portugal (CP), in addition to a way-station in Bom João. Faro receives trains from intercity lines, Alfa Pendular and longer regional.[15] The town is serviced by a public transport network that include minibus, local bus lines and regional services across the Algarve.

Due to its position along the coast, there is a need to connect the shoreline communities with the outlying with various islands; with the exception of the island of Faro, most are accessible only by boat service.[16] Throughout the year (from the commercial wharf or Portas do Mar wharf, depending the time of year) there are regular and tourist service along the estuary.[16]

The Faro city holiday is on 7 September. The students' festival (Semana Académica da Universidade do Algarve), organized every year by students from the University of the Algarve, is also an important event in Faro. The Faro International Motorcycle Rally, usually held in mid-July, is a famous festival, renowned in Europe for being one of the biggest of its kind. 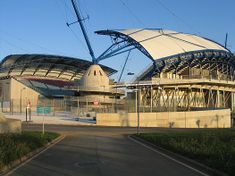 The Estádio Algarve opened for Euro 2004.

Its a 30,000-seat stadium Estádio Algarve, shared by the cities of Faro and Loulé, was one of the venues of the Euro 2004 football championship and is also the temporary home ground of the Gibraltar national football team. Louletano Desportos Clube (a club from the city of Loulé) and Sporting Clube Farense (from Faro) also use smaller municipal stadiums. The stadium is also used for concerts, festivals and other events.