Faroese[3] /ˌfɛəroʊˈiːz/ (føroyskt, pronounced [ˈføːɹɪst]) is a North Germanic language spoken as a native language by about 66,000 people, 45,000 of whom reside on the Faroe Islands and 21,000 in other areas, mainly Denmark. It is one of five languages descended from Old West Norse spoken in the Middle Ages, the others being Norwegian, Icelandic, and the extinct Norn and Greenlandic Norse. Faroese and Icelandic, its closest extant relative, are not mutually intelligible in speech, but the written languages resemble each other quite closely, largely owing to Faroese's etymological orthography.[4] 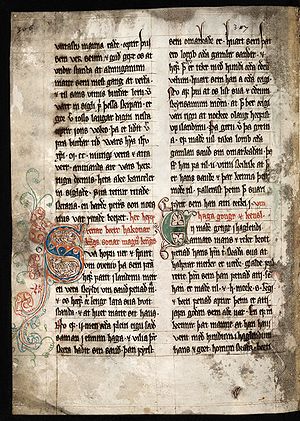 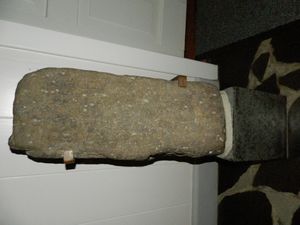 The Famjin Stone, a Faroese runestone

Between the 9th and the 15th centuries, a distinct Faroese language evolved, although it was probably still mutually intelligible with Old West Norse, and remained similar to the Norn language of Orkney and Shetland during Norn's earlier phase.

Until the 15th century Faroese had an orthography similar to Icelandic and Norwegian, but after the Reformation in 1536 the ruling Danes outlawed its use in schools, churches and official documents. The islanders continued to use the language in ballads, folktales, and everyday life. This maintained a rich spoken tradition, but for 300 years the language was not used in written form.

This changed when Venceslaus Ulricus Hammershaimb and the Icelandic grammarian and politician Jón Sigurðsson published a written standard for Modern Faroese in 1854, which is still in existence. They set a standard for the orthography of the language, based on its Old Norse roots and similar to that of Icelandic. This had the advantage of being etymologically clear, as well as keeping the kinship with the Icelandic written language. The actual pronunciation, however, often differs from the written rendering. The letter ð, for example, has no specific phoneme attached to it.

Jakob Jakobsen devised a rival system of orthography, based on his wish for a phonetic spelling, but this system was never taken up by the speakers.[7]

In 1937, Faroese replaced Danish as the official school language, in 1938 as the church language, and in 1948 as the national language by the Home Rule Act of the Faroes. However, Faroese did not become the common language of media and advertising until the 1980s.[citation needed] Today Danish is considered a foreign language, although around 5% of residents on the Faroes learn it as a first language, and it is a required subject for students in third grade[8] and up.

Old Faroese (miðaldarføroyskt, ca. mid-14th to mid-16th centuries) is a form of Old Norse spoken in medieval times in the Faroe Islands. The language shares many features with both Old Icelandic and Old Norwegian; Old Norwegian appears to be closer to Old Faroese, whereas Old Icelandic remained rather archaic compared to other medieval varieties of Old West Norse. The most crucial aspects of the development of Faroese are diphthongisation and palatalisation.[citation needed]

There is not enough data available to establish an accurate chronology of Faroese, but a rough one may be developed through comparison to the chronologies of Old Icelandic and Old Norwegian. In the 12th/13th centuries, á and ǫ́ merged as /ɔː/; later on at the beginning of the 14th century, itacism[citation needed] took place: y, øy, au > /i, ɔi, ɛi/; itacism of ý is not certain, í and ý merged together in addition to i and y, but in the case of í and ý, it appears that labialisation took place instead as is documented by later development to /ʊɪ/. Itacism may be also connected with the palatalisation of k, g and sk before Old Norse e, i, y, au > /kj, ɡj, skj/ > /cç, ɟʝ, ɕcç/ > /tʃʰ, tʃ, ʃ/. Approximately in the same period, é and ǽ merged as /ɛː/ and a svarabhakti u is inserted into /Cr/[clarification needed] clusters. The Great Quantity Shift[citation needed] operated in the 15th/16th centuries. In the case of skerping, it took place after itacism but before loss of post-vocalic ð and g /ɣ/. The shift of hv to /kw/, the deletion of /h/ in (remaining)[clarification needed] word-initial /h/–sonorant clusters (hr, hl, hn > r, l, n), and the dissolution of þ (þ > t; þ > h in unstressed syllables) appeared before the end of the 13th century. Another undated change is the merger of ǫ and ø into /ø/; pre-nasal ǫ > o. enk, eng probably became eing, eink in the 14th century; the development of a to /ɛ/ before ng, nk appeared after the palatalisation of k, g, and sk had been completed.

The Faroese alphabet consists of 29 letters derived from the Latin script:

As with other Germanic languages, Faroese has a large number of vowels, with 26 in total. Vowel distribution is similar to other North Germanic languages in that short vowels appear in closed syllables (those ending in consonant clusters or long consonants) and long vowels appearing in open syllables. Árnason (2011) provides the following alternations:

Faroese shares with other North Germanic languages the feature of contrasting aspirated and unaspirated stops. Geminated stops may be pre-aspirated in intervocalic and word-final position. Intervocalically the aspirated consonants become pre-aspirated unless followed by a closed vowel. In clusters, the preaspiration merges with a preceding nasal or apical approximant, rendering them voiceless.

There are several phonological processes involved in Faroese, including:

Faroese grammar is related and very similar to that of modern Icelandic and Old Norse. Faroese is an inflected language with three grammatical genders and four cases: nominative, accusative, dative and genitive.

To learn Faroese as a language