Faroese people (Føroyingar) are a Germanic ethnic group and nation native to the Faroe Islands.[4] The Faroese are of mixed Norse and Gaelic origins.[5] About 21,000 Faroese live in neighbouring countries, particularly in Denmark, Iceland and Norway. Most Faroese are citizens of the Kingdom of Denmark.

The Faroese language is a West Scandinavian language, closely related to Icelandic and more distantly to western Norwegian dialects. 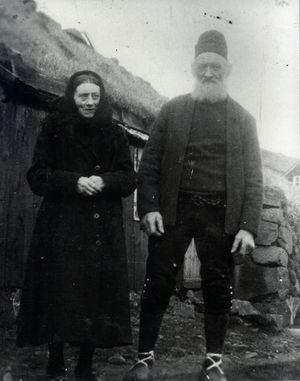 Elderly Faroese couple in the 1940s, wearing their traditional 'Sunday dress' for Church. 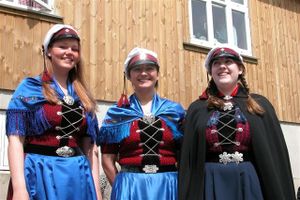 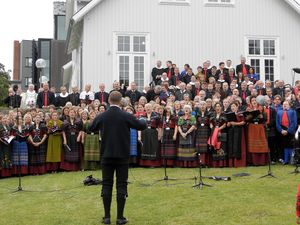 Faroese politicians, priests and choir in front of the Løgting (Parliament), Ólavsøka 2012.

The first colonists were Gaelic hermits and monks who arrived in the 6th century.

Later from around 650 the Norse-Gaels came and brought Norse culture and language to the islands. Little is known about this period, thus giving room for speculation. A single source mentions early settlement, the Icelandic Færeyinga saga. It was written somewhere around 1200, and it explains events taking place about 300 years earlier. According to the saga, many Norsemen objected to the Norwegian king's unification politics and thus fled to other countries, including the newfound places in the west.

While Grímur is an Old Norse first name, Kamban indicates a Celtic origin. Thus he could have been a man from Ireland, Western Isles or Isle of Man, where the Vikings already had settlements. Some place names from the oldest settlements on the Faroes suggest that some of the settlers perhaps came from the Scottish islands and the British coast.