The Fight for $15 an hour involves child care, home healthcare, airport, gas station, convenience store, and fast food workers striking for increased pay and the right to form a union with their employers.

Strikes and protests in the United States

On November 29, 2012, over 100 fast-food workers from McDonald's, Burger King, Wendy's, Domino's, Papa John's, Kentucky Fried Chicken and Pizza Hut walked off their jobs in New York City, New York in strike for higher wages, better working conditions and the right to form a union without retaliation from their managers.[1][2] Many workers were making the minimum wage at the time. However, many allegedly were making, and are currently making, less than the minimum wage due to wage theft on the part of their employers.[3] This was the largest strike in the history of the fast-food industry.[4] Earning less than a living wage has forced many fast-food workers to have multiple jobs, obtain food stamps and other forms of government assistance, in order to afford basic food, shelter and clothing.[5] This rate is declared to be below what the Massachusetts Institute of Technology considers to be a "living wage" (based on cost of living and necessary expenses) for all five boroughs of New York City.[6] Time (magazine) described this initial effort as seizing on the public's concern with economic inequality in the United States as stimulated by the Occupy Wall Street movement in 2011 and 2012.[7]

The strike was organized by over 40 personnel from New York Communities for Change, Service Employees International Union, UnitedNY, and the Black Institute.[8] On April 4, 2013 (the 45th anniversary of the assassination of Martin Luther King, Jr. and the Memphis Sanitation Strike) more than 200 fast-food workers went on strike in New York City. Hundreds of other workers went on strike in Chicago on April 24, in Detroit on May 10, in St. Louis on May 9 and May 10, in Milwaukee on May 15 and in Seattle on May 30.[9][10][11]

On July 29, approximately 2,200 workers went on strike in all of the cities where fast-food workers had previously gone on strike with the addition of Flint, Michigan and Kansas City, Missouri.[12][13]

On December 6, 2013, further fast food strikes occurred nationwide in a campaign aimed at raising the minimum wage to $15 per hour.[14]

“
”
Saru Jayaraman, director of the Food Labor Research Center at the University of California, Berkeley.[15]

On September 4, 2014, another national strike took place in more than 150 cities, but this time thousands of Home care workers joined the fast food workers.[16][17] In another departure from previous protests, organizers shifted tactics and encouraged acts of civil disobedience such as sit ins to further draw attention to their cause. Between 159 and 436 arrests were made.[18][19] Striking fast food workers from Ferguson, Missouri were arrested in Times Square, New York City, in solidarity with workers there nearly a month after the police Shooting of Michael Brown.[20]

On December 4, 2014, thousands of fast food workers walked off of the job in 190 U.S. cities to engage in further protests for $15 an hour and union representation, and were joined by caregivers, airport workers, and employees at discount and convenience stores. The strikes were also bolstered by anger over the deaths of Michael Brown and Eric Garner at the hands of police. Chants of “15 and a union” were accompanied by "Hands up, don’t shoot" and "I can’t breathe." Kendall Fells, organizing director for Fast Food Forward, claimed the strikes were “fights against injustice in the U.S.”[21][22][23] Organizers from Black Lives Matter supported the strike.[24][25]

On April 15, 2015, tens of thousands of fast food workers in more than 200 cities took to the streets again in what labor organizers have described as the largest protest by low-wage workers in US history. In their campaign to raise the minimum wage to $15 an hour, labor activists and fast food workers were joined by home care assistants, Walmart workers, child-care aides, airport workers, Adjunct professors and others who work low-wage jobs.[26] Gary Chaison, a professor of industrial relations at Clark University, noted that this protest movement is unique among labor disputes:

What is really significant about the Fight for $15 movement is – most labor disputes, look inside, they're about a group of workers covered by a collective bargaining agreement. In the Fight for $15, unions are helping to organize on a community basis, a group of workers who are on the fringe of the economy. It’s not about union members protecting themselves. It’s about moving other people up. This is the whole civil rights movement all over again.

Another strike took place in November 2015.[27] U.S. Senator Bernie Sanders (I-VT) voiced his support for the striking workers and a $15 an hour federal minimum wage at a Fight for $15 rally in Washington DC.[28][29]

On May 15, 2014, fast food workers in countries around the world, including Brazil, the United Kingdom, Japan and the U.S., went on strike to protest low wages in fast food restaurants.[30] The strikes took place in 230 cities as workers demanded a $15 minimum wage and the right to unionize without fear of retaliation.[31] Less than a week later, a mass protest at McDonald's headquarters in Oak Brook, Illinois took place and resulted in over 100 protesters being arrested, including workers, church leaders and Service Employees International Union president Mary Kay Henry, and a partial shutdown of the McDonald's campus.[32] According to the movement organizers, the protest took place in 30 cities in Japan, 5 cities in Brazil, 3 cities in India and 20 cities in Britain.[33] The labor federation with over 12 million workers in 126 countries joined the protest to help propel the effort.[33] Industry officials say that only a small percentage of fast-food jobs pay the minimum wage and that those are largely entry-level jobs for workers under 25. Backers of the movement for higher pay point to studies saying that the average age of fast food workers is 29 and that more than one-fourth are parents raising children.[34] According to Mary Kay Henry, the president of service employees international union “fast food workers in many other parts of the world face the same corporate policy. Low pay, no guaranteed hours and no benefits”. According to her, such unfairness in the wages exist due to the lack of opportunity for these workers to unionize.[35] According to one of McDonald’s workers, the minimum wages is not enough to take care of his kids and their education. However, some analysts says that increasing the wages will have harmful consequences on the hiring rate which could cause a large number of unemployed people. Even though, there have been appealing protests inside US and overseas but it will not bring any changes in the fast food wage system unless the employees are unionized.

Julie Sherry, an organizer of the protests in the United Kingdom, which have taken place on a several occasions since January, projected that 100 workers would meet at 4pm London time at the McDonald’s in Trafalgar Square. They planned to carry signs declaring, “Fast Food Rights” and “Hungry for Justice” and to chant, “Zero Hours, No Way” — a reference to contracts in the UK that an estimated 90% of McDonald’s workers have signed that don’t guarantee them any hours but expect workers to come in whenever they are called.[36] Organizers say that in the Philippines, workers held a flash mob inside a Manila McDonald’s, singing and dancing to “Let It Go,” from the movie Frozen, urging McDonald’s to “let go” of its low wages and allow workers to organize.[37] Protesters in Brussels shut down a McDonald’s at lunchtime, and protesters in Mumbai who were threatened with arrests by local police were undeterred. Japan saw protests in nearly every prefecture and showed solidarity with U.S. workers by calling on McDonald’s to pay Japanese workers 1,500 Yen.[37]

This is not the first time that the workers protested against the low wages. On November 29, 2012 about 200 workers protested at a McDonald’s at Madison Avenue and 40th Street chanting “Hey, hey, what do you say? We demand fair pay”.[38] According to Kate Bronfenbrenner, director of labor education research at the Cornell University School of Industrial and Labor Relations, the workers global campaign is not a new idea. To determine the origins of this approach, you have to take a trip back to the 1800s, when workers in Britain and India jointly protested the way the East India Company treated its Indian workers.[39]

Some economists and labor activists are looking to the Danish socioeconomic model, with its powerful unions and living wages for fast-food workers, as evidence that companies can adapt in nations that have high wage floors, and that such a model can serve as an example to the United States. According to John Schmitt of the Center for Economic and Policy Research: “We see from Denmark that it’s possible to run a profitable fast-food business while paying workers these kinds of wages.” Stephen J. Caldeira, President and CEO of the International Franchise Association, an organization that has many fast-food companies as members, strongly disagrees and claims that “trying to compare the business and labor practices in Denmark and the U.S. is like comparing apples to autos.”[40] 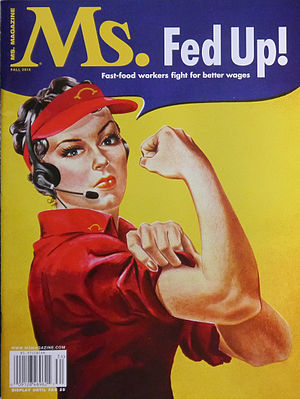 A January 2015 study by economists at the University of Massachusetts at Amherst found that fast food companies could absorb an incremental wage hike from $7.25 to $15 without shedding jobs by reducing turnover and slightly increasing prices.[41]

Patrick McGeehan of the New York Times argued in his July 22, 2015 article on the New York State Wage Board's decision to raise the minimum wage in New York City to $15 an hour by December 31, 2018, and their decision to raise the state minimum wage to $15 an hour by July 1, 2021, that: "The labor protest movement that fast-food workers in New York City began nearly three years ago has led to higher wages for workers all across the country". This includes legislation passed in Los Angeles, Seattle, and San Francisco to raise their minimum wage to this level.[42]