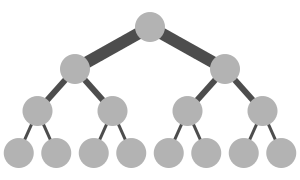 The fat tree network, invented by Charles E. Leiserson of MIT, is a universal network for provably efficient communication.[1] Unlike an ordinary computer scientist's notion of a tree, which has "skinny" links all over, the links in a fat-tree become "fatter" as one moves up the tree towards the root. By judiciously choosing the fatness of links, the network can be tailored to efficiently use any bandwidth made available by packaging and communications technology. In contrast, other communications networks, such as hypercubes and meshes, have communication requirements that follow a prespecified mathematical law, and therefore cannot be tailored to specific packaging technologies.

Mercury Computer Systems used a hypertree network, a variant of fat trees, in their multicomputer. From 2 to 360 compute nodes would reside in a circuit switched fat tree network, with each node having local memory that could be mapped by any other node. Each node in this heterogeneous system could be an Intel i860, a PowerPC, or a group of three SHARC DSPs. The fat tree network was particularly well suited to the FFT, which customers used for signal processing tasks like radar, sonar, medical imaging, and so on.

A fat tree network is now preferred[citation needed] for the InfiniBand cluster architecture.

The connectivity of the Internet is very similar to a fat tree, where the connection rates go up at higher tiers. There are differences however, since the Internet additionally has local connections (peering).

In late August 2008, a team of computer scientists at UCSD published a scalable design for network architecture[3] that uses a topology inspired by the fat tree topology to realize networks that scale better than those of previous hierarchical networks. The architecture uses commodity switches that are cheaper and more power-efficient than high-end modular data center switches.

This topology is actually a special instance of a Clos network, rather than a fat-tree as described above. That is because the edges near the root are emulated by many links to separate parents instead of a single high-capacity link to a single parent. However, many authors continue to use the term in this way.