From Infogalactic: the planetary knowledge core
Jump to: navigation, search
This article is about the medical term. For other uses, see Fatigue.
Not to be confused with muscle weakness.

Fatigue (also called exhaustion, tiredness, languidness, languor, lassitude, and listlessness) is a subjective feeling of tiredness which is distinct from weakness, and has a gradual onset. Unlike weakness, fatigue can be alleviated by periods of rest. Fatigue can have physical or mental causes. Physical fatigue is the transient inability of a muscle to maintain optimal physical performance, and is made more severe by intense physical exercise.[1][2][3] Mental fatigue is a transient decrease in maximal cognitive performance resulting from prolonged periods of cognitive activity. It can manifest as somnolence, lethargy, or directed attention fatigue.[4]

Medically, fatigue is a non-specific symptom, which means that it has many possible causes. Fatigue is considered a symptom, rather than a sign because it is a subjective feeling reported by the patient, rather than an objective one that can be observed by others. Fatigue and 'feelings of fatigue' are often confused.[5] 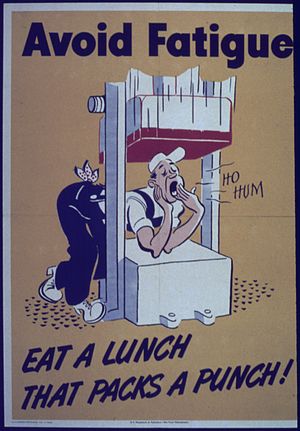 "Avoid fatigue - Eat a lunch that packs a punch"

Physical fatigue, or muscle fatigue, is the temporary physical inability of a muscle to perform optimally. The onset of muscle fatigue during physical activity is gradual, and depends upon an individual's level of physical fitness, and also upon other factors, such as sleep deprivation and overall health. It can be reversed by rest.[6] Physical fatigue can be caused by a lack of energy in the muscle, by a decrease of the efficiency of the neuromuscular junction or by a reduction of the drive originating from the central nervous system.[7] The central component of fatigue is triggered by an increase of the level of serotonin in the central nervous system.[8] During motor activity, serotonin released in synapses that contact motoneurons promotes muscle contraction.[9] During high level of motor activity, the amount of serotonin released increases and a spillover occurs. Serotonin binds to extrasynaptic receptors located on the axon initial segment of motoneurons with the result that nerve impulse initiation and thereby muscle contraction are inhibited.[10]

Musculoskeletal structures may have co-evolved with their corresponding brain structures in a way that allows them to adapt to environmental conditions (e.g.—proprioception).[12][13]

People with multiple sclerosis experience a form of overwhelming lassitude or tiredness that can occur at any time of the day, for any duration, and that does not necessarily recur in a recognizable pattern for any given patient, referred to as "neurological fatigue".[14][15]

Mental fatigue is a temporary inability to maintain optimal cognitive performance. The onset of mental fatigue during any cognitive activity is gradual, and depends upon an individual's cognitive ability, and also upon other factors, such as sleep deprivation and overall health. Mental fatigue has also been shown to decrease physical performance.[4] It can manifest as somnolence, lethargy, or directed attention fatigue. Decreased attention is known as ego depletion and occurs when the limited 'self-regulatory capacity' is depleted.[16] It may also be described as a more or less decreased level of consciousness.[17] In any case, this can be dangerous when performing tasks that require constant concentration, such as operating large vehicles. For instance, a person who is sufficiently somnolent may experience microsleep. However, objective cognitive testing can be used to differentiate the neurocognitive deficits of brain disease from those attributable to tiredness.[citation needed]

The perception of mental fatigue is believed to be modulated by the brain's reticular activating system (RAS).[citation needed]

Fatigue is generally considered a more long-term condition than sleepiness (somnolence).[18] Although sleepiness can be a symptom of medical issues, it usually results from lack of restful sleep, or a lack of stimulation.[19] Chronic fatigue, on the other hand, is a symptom of a greater medical problem in most cases. It manifests in mental or physical weariness and inability to complete tasks at normal performance.[20] Both are often used interchangeably and even categorized under the description of 'being tired.'

Fatigue is a normal result of working, mental stress, overstimulation and understimulation, jet lag or active recreation, depression, and also boredom, disease and lack of sleep. It may also have chemical causes, such as poisoning or mineral or vitamin deficiencies. Chronic blood loss frequently results in fatigue, as do other conditions that cause anemia. Fatigue is different from drowsiness, where a patient feels that sleep is required. Fatigue is a normal response to physical exertion or stress, but can also be a sign of a physical disorder.

Temporary fatigue is likely to be a minor illness like the common cold as one part of the sickness behavior response that happens when the immune system fights an infection.

Fatigue may also be a side effect of certain medications (e.g., lithium salts, ciprofloxacin); beta blockers, which can induce exercise intolerance; and many cancer treatments, particularly chemotherapy and radiotherapy.

Minor dark circles, in addition to a hint of eye bags, a combination mainly suggestive of minor sleep deprivation.

One study concluded about 50% of people who have fatigue receive a diagnosis that could explain the fatigue after a year with the condition. In those people who have a possible diagnosis, musculoskeletal (19.4%) and psychological problems (16.5%) are the most common. Definitive physical conditions were only found in 8.2% of cases.[25]

If a person with fatigue decides to seek medical advice, the overall goal is to identify and rule out any treatable conditions. This is done by considering the person's medical history, any other symptoms that are present, and evaluating of the qualities of the fatigue itself. The affected person may be able to identify patterns to the fatigue, such as being more tired at certain times of day, whether fatigue increases throughout the day, and whether fatigue is reduced after taking a nap.

Because disrupted sleep is a significant contributor to fatigue, a diagnostic evaluation considers the quality of sleep, the emotional state of the person, sleep pattern, and stress level. The amount of sleep, the hours that are set aside for sleep, and the number of times that a person awakens during the night are important. A sleep study may be ordered to rule out a sleep disorder.

Depression and other psychological conditions can produce fatigue, so people who report fatigue are routinely screened for these conditions, along with drug abuse, poor diet, and lack of physical exercise, which paradoxically increases fatigue.

Basic medical tests may be performed to rule out common causes of fatigue. These include blood tests to check for infection or anaemia, a urinalysis to look for signs of liver disease or diabetes mellitus, and other tests to check for kidney and liver function, such as a comprehensive metabolic panel.[26] Other tests may be chosen depending on the patient's social history, such as an HIV test or pregnancy test.