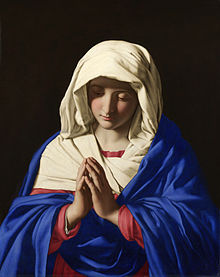 Madonna by Sassoferrato, an example of Marian art

The Fátima Prayer (Portuguese pronunciation: [ˈfatimɐ]) or Invocation is a common version of the Jesus Prayer used by Catholics. It, along with four other "Fátima prayers", originated during the Marian apparitions at Fátima, Portugal, in 1917. The Decade Prayer, as the most commonly said of these five prayers is known, is commonly added at the end of each decade of the Dominican Rosary, one of the most popular devotional practices in Roman Catholicism. Two other prayers are also associated with the visions and may be classed as Fátima Prayers. However, they did not come to existence in Fátima but in Spain many years later. This brings the number of prayers to seven.

While not part of the original tradition of the Rosary or in the original text of the vulgate, many Roman Catholics choose to add it after the Glory Be to the Father after the Blessed Virgin Mary was said to have requested its use during her apparition at Fátima, a miracle deemed "worthy of belief" by the Church. The following text of the prayer appears first in Latin and then in English.

O my Jesus, forgive us our sins, save us from the fires of hell, lead all souls to Heaven, especially those most in need of Thy mercy. Amen.

Here is a Portuguese version:

According to the book Our Lady of Fátima by William Thomas Walsh (Macmillan, 1947), in an interview with the author,[1] Sr. Lucia states that "The correct form is the one I have written in my account of the apparition of July 13: 'O my Jesus, pardon us, and save us from the fire of hell; draw all souls to heaven, especially those most in need.'" This version does not have the commonly added phrase "of thy mercy" at the end of it.

It also gives the original Portuguese in a footnote: "Ó meu Jesus, perdoai-nos e livrai-nos do fogo do inferno; levai as alminhas todas para o Céu, principalmente aquelas que mais precisarem." The third petition, "levai as alminhas todas para o Céu" is more accurately translated as "lead all little souls toward heaven." "Little souls" is a term of endearment among Portuguese Catholics for the souls in Purgatory, equivalent to the phrase in English "poor souls." The context of the phrase refers to the deliverance of all souls from purgatory into heaven; and thus this petition never signified universal salvation.[2]

The less commonly said "Fátima Prayers" include the Pardon Prayer, the Angel's Prayer, the Eucharistic Prayer and the Sacrifice Prayer which the seers said they learned from the heavenly personages of their visitations. Sister Lucia said another two prayers were given to her in 1931 in a vision of Jesus Christ. These two are known as the Conversion Prayer and the Salvation Prayer and are often classed as Fátima prayers.

The seers said this prayer was taught to them in the initial Fátima apparition in the spring of 1916, by an angel who called himself "the Guardian Angel of Portugal".

My God, I believe, I adore, I hope and I love Thee! I beg pardon for all those that do not believe, do not adore, do not hope and do not love Thee.

In the autumn of that year, according to Lucia, she and her cousins saw the same angel again, and he taught them a second prayer. At the same time they beheld a vision of the Blessed Sacrament suspended in the air before which the Angel prostrated himself and prayed:

O Most Holy Trinity, Father, Son and Holy Spirit, I adore Thee profoundly. I offer Thee the most precious Body, Blood, Soul and Divinity of Jesus Christ present in all the tabernacles of the world, in reparation for the outrages, sacrileges and indifferences by which He is offended. By the infinite merits of the Sacred Heart of Jesus and the Immaculate Heart of Mary I beg the conversion of poor sinners.

The Angel's Prayer is an Act of Reparation to The Holy Trinity.

On May 13, 1917, the three children saw a woman clad in radiant white, whom they later realized was the Virgin Mary. Her primary message at first was the importance of praying the Rosary. She also asked the children if they would be willing to offer sacrifices in reparation for the sins of the world, and they agreed; she then said "You will have much to suffer, but the grace of God will be your comfort." When she said "the grace of God" she held out her hands and the children experienced a great light surrounding and penetrating them. Without thinking about it, they found themselves saying these words:

Most Holy Trinity, I adore you! My God, my God, I love you in the Most Blessed Sacrament.

Lucia later wrote that they were "moved by an interior impulse", as she was at the October 13, 1917 vision where she was heard calling "Look at the sun!"

On the 13th of June of that year, the seers said the "lady from heaven" appeared again and taught them two more prayers, the Decade Prayer and the Sacrifice Prayer. This second prayer was to be said when offering up an action or some suffering in a spirit of Sacrifice.

O Jesus, it is for the love of You, in reparation for the offences committed against the Immaculate Heart of Mary, and for the conversion of poor sinners [Some add here "that I pray/do this"].

William Thomas Walsh said Lucia told him the words as follows: "O Jesus, it is for your love, for the conversion of sinners, and in reparation for sins committed against the Immaculate Heart of Mary."[3]

This prayer, spoken sincerely, effectively allows any hardship, illness or pain in one's life to be offered as Acts of Reparation.

The Conversion and Salvation Prayers

The final two prayers were taught to the last of the living seers, Lucia, as her two companions had since died. In 1931 she had a vision in Rianxo, Spain, where she met Christ. He asked her to pray for the Conversion and Salvation of the world through the Heart of Mary, His Mother.

By your pure and Immaculate Conception, O Mary, obtain the conversion of Russia, Spain, Portugal, Europe and the whole world!

Sweet Heart of Mary, be the salvation of Russia, Spain, Portugal, Europe and the whole world.

The Eucharistic Prayer and the Pardon Prayer are often used as ejaculatory prayers which are quite common in Catholic tradition. A visiting Jesuit priest, Father Cruz, also taught the children to say brief prayers; "Jesus, I love you" or "Immaculate Heart of Mary, save the poor sinners". According to Lucia, Jacinta immediately set these prayers to music and could be heard singing them throughout the day.[4]

Other Prayers and Practices related to the Visions

These prayers were not the only devotions which arose from the visions of Fátima. Lucia said that Mary called for a series of devotions, including the Five Saturdays, frequent recitation of the Rosary, and prayers for the conversion of Russia – at the time viewed by the Church as a godless, Communist nation.