Fausto Zonaro (18 September 1854 – 19 July 1929) was an Italian painter, best known for his Realist style paintings of life and history of the Ottoman Empire. 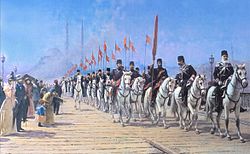 In 1892, Zonaro and Pante married, and lived in the Istanbul neighborhood of Pera.

Fausto Zonaro was born in Masi, a municipality in the Province of Padua, then part of the Austrian Empire. He was the eldest child of the mason Maurizio and his wife Elisabetta Bertoncin. Maurizio intended that his son should also be a mason, yet at a young age, Fausto showed a great ability at drawing.[2] With his parents’ consent, he enrolled first in the Technical Institute in Lendinara, then in the Cignaroli Academy in Verona under Napoleone Nani. Fausto opened a small art school and studio in Venice, but traveled often to Naples as well. He felt no clear direction in his life at that time.

He actively displayed works in exhibition and gained respect of critics. He painted mainly genre works in oil and watercolor. In 1883 at Milan, he exhibited: Le rivelatrici napoletane; Da Sant'Elmo, and Al Pincio; in Rome, the canvases Passa la vacca; La sofferente; Le cucitrici napoletane, and Il saponaro. In 1884, at Turin: Tempesta; Primo nato; Primo tuono, and the Zoccolaro of Naples; and in 1887 at Venice: In attesa; Al Redentoretto, and Lavoratrice di perle. La casa Camerini of Padua once possessed a banditore; and two canvases: I pigiatori and In medio stat virtus.[3] 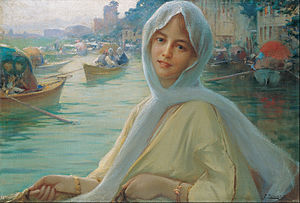 The turning point in Zonaro’s career occurred however in 1891, when he fell in love with Elisabetta Pante, a pupil of his in Venice, And together they traveled to Istanbul, capital of the Ottoman Empire. They were partly inspired by Edmondo de Amicis’ orientalist travel book Constantinopoli.[2]

In Istanbul, over time he gained patronage in aristocratic circles. Munir Pasha, the Minister of Protocol, who invited him to visit Yıldız Palace and meet the prestigious local artist Osman Hamdi Bey. He was employed in teaching painting to the Pasha's wife, and in this way Zonaro and Pante got to know the important artistic figures of Istanbul of that time. In 1896 he was nominated as the court painter (Ottoman Turkish: Ressam-ı Hazret-i Şehriyari) thanks to the intervention of the Russian ambassador who had presented the ruling sultan Abdulhamid II with Zonaro’s work Il reggimento imperiale di Ertugrul sul ponte di Galata (in English: The Imperial Regiment of the Ertugrul on the Galata Bridge), which Abdulhamid II had then purchased. 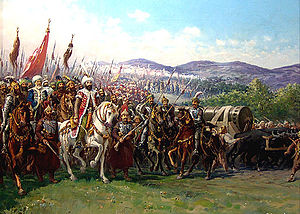 The Sultan later commissioned from Zonaro a series of paintings depicting events in the life of the 15th-century Ottoman sultan, Mehmed II. Holding the position of court painter, Zonaro viewed himself as the successor to the Venetian painter Gentile Bellini, who had been commissioned by Mehmed II to paint his portrait over 300 years earlier.[4] 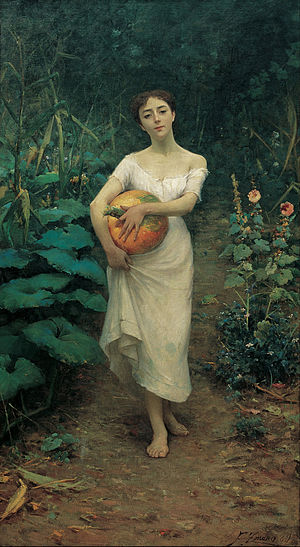 Also during his stay in Istanbul, Zonaro witnessed the Day of Ashura processions carried out by the Shia Muslims on the tenth of Muharram, and it was the procession of Tatbir that inspired him to paint his renowned painting 10th of Muharram, it was reported that Zonaro said "After witnessing the horripilating procession (of Tatbir) I wish I were able to meet this man they mourn for". The "man" Zonaro speaks of indicates to the oppressed grandson of the Muslim prophet Mohammed, Hussein ibn Ali.

Zonaro remained in Istanbul until 1909, when he returned to Italy following the Young Turk Revolution that overthrew his patron Abdulhamid II and the shift to constitutional monarchy. There would be no Ottoman court painter after him.[2] He settled in Sanremo where he continued to paint small works depicting the Italian Riviera and the nearby French Riviera until his death.

In 1920 he separated from his wife and began living with his daughter. Nine years later, he died. He is buried in the Foce Cemetery in Sanremo. On his gravestone, underneath an Ottoman tughra, it states that Zonaro was the court painter of the Ottoman Empire.[5]

Zonaro painted portraits, landscapes and historical paintings. It is claimed that “Zonaro was one of those who made a major contribution to the development of western style art in Turkey.”[5] He was a prolific artist who created hundreds of works, most of which are of the Ottoman Empire. An exhibition of his work in Florence in 1977 "received wide acclaim in the art world".[5]

Today, most of Zonaro’s works remain in Istanbul, and many of them are on display in the city’s leading museums. His pictures can be found in the state museums of Topkapı Palace, Dolmabahçe Palace and the Istanbul Military Museum. Zonaro’s works can also be found in the private Sakıp Sabancı Museum[6] and Pera Museum. Also, a number of them belong to private collectors in Turkey.[5]

Some of Zonaro's paintings are in the Pera Art Museum in Istanbul (including Daughter of English Ambassador Riding in a Palaquin) and the Istanbul Museum of Modern Art.