Although most modern calendar years have 365 days, a complete revolution around the sun (one Solar year) takes approximately 365 days and 6 hours. An extra 24 hours thus accumulates every four years, requiring that an extra calendar day be added to align the calendar with the sun's apparent position. Without the added day, the seasons would move back in the calendar, leading to confusion about when to undertake activities dependent on weather, ecology, or hours of daylight.

The concepts of the leap year and leap day are distinct from the leap second, which results from changes in the Earth's rotational speed. 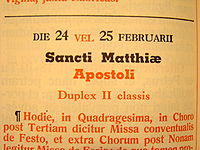 Adding a leap day (after 23 February) shifts the commemorations in the 1962 Roman Missal.

The leap day was introduced as part of the Julian reform. The day following the Terminalia (February 23) was doubled, forming the "bis sextum"—literally 'double sixth', since February 24 was 'the sixth day before the Kalends of March' using Roman inclusive counting (March 1 was the 'first day'). Although exceptions exist, the first day of the bis sextum (February 24) was usually regarded as the intercalated or "bissextile" day since the third century.[1] February 29 came to be regarded as the leap day when the Roman system of numbering days was replaced by sequential numbering in the late Middle Ages.

A person who is born on February 29 may be called a "leapling" or a "leap-year baby". In non-leap years, some leaplings celebrate their birthday on either February 28 or March 1, while others only observe birthdays on the authentic intercalary date, February 29.

The effective legal date of a leapling's birthday in non-leap years varies between jurisdictions.

In the United Kingdom and Hong Kong, when a person born on February 29 turns 18 in a non-leap year, they are considered to have their birthday on March 1 in the relevant year.[2][3]

In New Zealand, a person born on February 29 is deemed to have their birthday on February 28 in non-leap years, for the purposes of Driver Licensing under §2(2) of the Land Transport (Driver Licensing) Rule 1999.[4] The net result is that for drivers aged 75, or over 80, their driver licence expires at the end of the last day of February, even though their birthday would otherwise fall on the first day in March in non-leap years. Otherwise, New Zealand legislation is silent on when a person born on 29 February has their birthday, although case law[5] would suggest that age is computed based on the number of years elapsed, from the day after the date of birth, and that the person's birth day then occurs on the last day of the year period. This differs from English common law where a birthday is considered to be the start of the next year, the preceding year ending at midnight on the day preceding the birthday. While a person attains the same age on the same day, it also means that, in New Zealand, if something must be done by the time a person attains a certain age, that thing can be done on the birthday that they attain that age and still be lawful.

In Taiwan (Republic of China), the legal birthday of a leapling is February 28 in common years:

Thus, in England and Wales or in Hong Kong, a person born on February 29 will have legally reached 18 years old on March 1. If he or she was born in Taiwan he or she legally becomes 18 on February 28, a day earlier. In the United States, according to John Reitz, a professor of law at the University of Iowa, there is no "... statute or general rule that has anything to do with leap day."[7] Reitz speculates that "March 1 would likely be considered the legal birthday in non-leap years of someone born on leap day,"[7] using the same reasoning as described for the United Kingdom and Hong Kong.

There are many instances in children's literature where a person's claim to be only a quarter of their actual age turns out to be based on counting their leap-year birthdays. A similar device is used in the plot of Gilbert and Sullivan's 1879 comic opera The Pirates of Penzance: As a child, Frederic was apprenticed to a band of pirates until his 21st birthday. Now, having passed his 21st year, he leaves the pirate band and falls in love. However, since he was born on February 29, that day will not arrive until he is eighty-four. As such, he must leave his fiancée and return to the pirates. It may be worked out from the opera's dialogue[8] that Frederic's birthday is February 29, 1852, thus making the opera set in 1873. (This assumes that Frederic is aware that 1900 will not be a leap year. If not, the dates would be later by four years.)

This plot point was also used in a Sherlock Holmes story based on the Basil Rathbone era, where a friend of Dr. Watson's is a Baronet who is due to receive his inheritance on the New Year's Day of the year where his twenty-first birthday will be celebrated, only for the law to deprive him of the money as he was born on February 29; with the 84-year-old Baronet distraught at the news that 1900 is not a leap year, Holmes helps the Baronet fake his death long enough for his grandson — who is the appropriate age to receive the inheritance — to establish his claim and receive the money himself.

Other notable persons born on February 29:

There is a popular tradition known as Bachelor's Day in some countries allowing a woman to propose marriage to a man on February 29. If the man refuses, he then is obliged to give the woman money or buy her a dress. In upper-class societies in Europe, if the man refuses marriage, he then must purchase 12 pairs of gloves for the woman, suggesting that the gloves are to hide the woman's embarrassment of not having an engagement ring. In Ireland, the tradition is supposed to originate from a deal that Saint Bridget struck with Saint Patrick.[10][11]

In Greece it is considered unlucky to marry on leap day.[12]