From Infogalactic: the planetary knowledge core
Jump to: navigation, search
Not to be confused with the Fed Cup, an international women's team tennis tournament.

The FedExCup is a championship trophy for the PGA Tour. Its introduction marked the first time that men's professional golf had a playoff system. Announced in November 2005, it was first awarded in 2007. Jordan Spieth is the 2015 champion. This competition is sponsored by FedEx.

The PGA Tour adjusted the rules around the FedExCup in each of the two years after its introduction in 2007. Each set of changes was introduced to address issues that arose the previous year, particularly with the playoffs portion of the FedExCup:

Qualifying for the playoffs

The following are the criteria for the 2012 season (unchanged since 2009). Although the season structure changed beginning in the fall of 2013,[3] the qualifying criteria did not change.

For the first portion of the season, the "regular season", currently from January through the latter part of August (changing in fall 2013 to an October–August cycle), PGA Tour players can earn points in each event they play. The number of points for winning each tournament varies from 250 to 600, depending on the quality of the field for each event, with the typical tournament awarding 500. Fewer points are awarded to other players who finish each tournament, based on their final position.

The ultimate goal is to be among the top 125 points leaders following the final event of the regular season. Only those players who are regular full-time members of the PGA Tour will earn points. A non-member who joins the PGA Tour in mid-season will be eligible to earn points in the first event he plays after officially joining the Tour.

After the third playoff event, the top 30 players move to the final event. Points are reset at that time, so the #1 player has 2000 points, the #2 player has 1800 points, down to the #30 player who is given 168 points. The goal is to ensure that any of the 30 players has a chance to win the FedExCup, but give the top players the best chance, with all of the top five players assured of winning the FedExCup by winning the Tour Championship, which is held at East Lake Golf Club each year.

Once the final 125 playoff qualifiers are set, no alternates will be allowed. It is possible for any player among the final 125 (then 100, then 70) to skip a playoff event prior to the Tour Championship, but if he did, he would risk his standing on the points list. This could potentially result in him being eliminated from the playoffs. 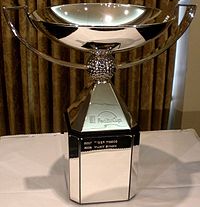 The player with the most points after the Tour Championship wins the FedExCup itself and $10 million of a $35 million bonus fund. The runner-up gets $3 million, 3rd place $2 million, 4th place $1.5 million, 5th place $1 million, and so on down to $32,000 for 126th through 150th place. Beginning with the 2013 season, non-exempt players who finish 126th-150th in the FedEx Cup are guaranteed conditional PGA Tour status, but can attempt to improve their priority rankings through the Web.com Tour Finals. Previously, conditional status was earned through the money list.

In 2007, the money was placed into their tax-deferred retirement accounts, not given in cash. Players under 45 are not able to access any 2007 FedExCup bonuses (as opposed to prize money earned in the tournaments themselves) until turning 45. They can invest their bonus in any manner they choose, and once they turn 45, can choose to defer payment until they turn 60 or play in fewer than 15 PGA Tour events in a season. Once a player chooses to take payments from his fund, he will receive monthly checks for five years.[4][5]

Because of possible legislation affecting deferred retirement plans, in the wake of business stories that speculated that Tiger Woods could amass a $1 billion retirement fund if he won the FedExCup six more times, the PGA Tour announced a change to the payout system effective in 2008. The top 10 finishers now receive the bulk of their FedExCup bonuses in cash up front; for example, the 2008 FedExCup champion received $9 million up front and $1 million in his tax-deferred retirement account. FedExCup bonuses to finishers below the top 10 are still paid solely into the players' retirement accounts.[6]

The winner of the FedExCup also receives a five-year exemption on the PGA Tour. This mirrors the exemption for the Leading Money Winner title (PGA Tour Exemption Category 8), but it may not have any practical implications. Players have almost never relied on the Leading Money Winner exemption, as they are usually exempt by other means. With the exception of the Tour Championship, which awards a 3-year PGA Tour exemption, winners of FedExCup playoff events receive only the standard 2-year exemption.

Beginning 2008, any player among the Final Top 30 FedExCup Points Leaders after the Tour Championship, if not exempt by other means, is placed in PGA Tour Exemption Category 18, which is just above the category for the Top 125 Official Money List leaders.

Through 2012, remaining FedExCup qualifiers for the next year will come from the PGA Tour's Official Money List. This particular list will be finalized after the PGA Tour Fall Series, a group of official PGA Tour events that follow the Tour Championship.

Also through 2012, the top 125 players on the money list will be fully exempt for the following year, with other golfers either eligible through other exemptions or needing to qualify by other means (e.g. "Qualifying school"). Starting in 2013, the players retaining their cards will be the top 125 on the FedEx Cup points list, with the next 75 on the points list having to enter the Web.com Tour Finals for a chance to retain their cards, unless otherwise exempt.[3]

Unless otherwise indicated, all are pgatour.com links.