From Infogalactic: the planetary knowledge core
Jump to: navigation, search
Not to be confused with FedExField.

FedEx Ground is a shipping company that is a subsidiary of the FedEx Corporation. It is headquartered in Moon Township, Pennsylvania, a suburb of Pittsburgh. Originally conceived as a lower cost competitor to UPS, Roadway Package System (RPS) was created to take advantage of new barcode, material handling and computer technologies. After beginning service on March 11, 1985, the company grew, expanding service from its initial coverage of the Mid-Atlantic states, so much so that it eventually became the largest subsidiary of its parent company, Akron-based Roadway Services. By 1996, RPS had achieved 100% coverage of the United States and Canada. In addition, Roadway Services had been reformed as a new holding company called Caliber System, Inc.

FedEx Ground now provides 1-5 day delivery of small packages to all 50 states, plus Canada. Ground also delivered to Puerto Rico, but this service was discontinued in 2009. The subsidiary also offers a specialty service known as FedEx Home Delivery which, coupled with Ground, serves all home addresses in the United States.

Pickups are completed by two different groups within FedEx Ground based on expected volume:

The resulting service is one that is less expensive than FedEx Ground but more expensive than regular mail and generally takes two to four days longer than standard FedEx ground shipping, with tracking information but without a guarantee of service.[3]

FedEx SmartPost is headquartered in New Berlin, WI, and operates 25 hubs[5] throughout the US: 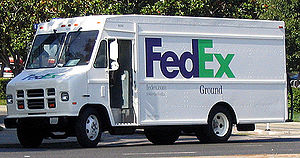