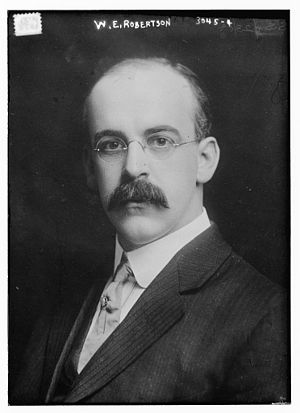 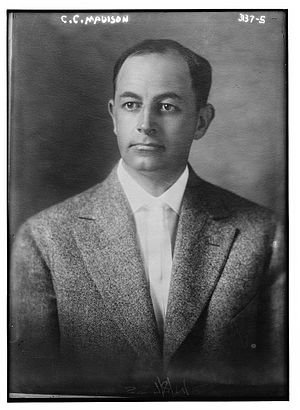 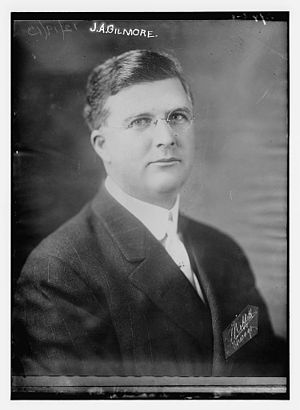 James A. Gilmore of the Federal League circa 1913

The Federal League of Base Ball Clubs, known simply as the Federal League, was an American professional baseball league that played its first season in 1913 and operated as a "third major league", in competition with the established National and American Leagues, from 1914 to 1915.

The Federal League came together in early 1913 through the work of John T. Powers, and immediately challenged the operations of organized baseball. Playing in what detractors called the "outlaw" league allowed players to avoid the restrictions of the organized leagues' reserve clause. The competition of another, better paying league caused players' salaries to skyrocket, demonstrating the bargaining potential of free agency for the first time.

Interference by the National and American Leagues in their operations caused the Federal League to fold after the 1915 season. This resulted in a landmark federal lawsuit, Federal Baseball Club v. National League, in which the U.S. Supreme Court ultimately ruled that the Sherman Antitrust Act did not apply to Major League Baseball.[1] The Federal League left its mark on baseball history in the field now known as Wrigley Field, which was originally built for the Chicago Whales Federal League team. The league itself and many sports writers considered it a major league during its existence; organized baseball recognized its major league status in 1968.[2][3] It would be the last independent major league outside the established structure of professional baseball to make it to the playing field, and would be the last serious attempt to create a third major league until the abortive Continental League of 1960.

In 1912, baseball promoter John T. Powers formed an independent professional league known as the Columbian League. However, the withdrawal of one of the organization's primary investors caused the league to fail before ever playing a game. Undaunted, Powers tried again the following year, creating a new league with teams in Chicago, Cleveland, Pittsburgh, Indianapolis, St. Louis, and Covington, Kentucky. He named the organization the Federal League, and served as its first president.[4]

Because it did not abide by the National Agreement on player payment in place in organized baseball, the Federal League was called an "outlaw league" by its competitors. The Federal League's outlaw status allowed it to recruit players from established clubs, and it attracted many current and former players from the major as well as minor leagues. In its first season Powers initially served as president, but he was soon replaced by James A. Gilmore, under whose leadership the league declared itself a major league for the 1914 season. Other financers of the League included oil baron Harry F. Sinclair, ice magnate Phil Ball, and George S. Ward of the Ward Baking Company.[5]

As a major circuit, the Federal League consisted of eight teams each season. Four of the teams were placed in established Big League cities (Chicago, St. Louis, Pittsburgh and Brooklyn). The other four teams were placed in more marginal areas (Baltimore, Buffalo, Indianapolis and Kansas City). In the first year, 1914, some of the teams had official nicknames and some did not, but either way, sportswriters were inclined to invent their own nicknames: "ChiFeds," "BrookFeds," etc. By the second season, most of the teams had "official" nicknames, although many writers still called many of the teams "-Feds."

The league had close pennant races both years. In 1914, Indianapolis beat out Chicago by 1½ games. 1915 witnessed the tightest pennant race in Major League history, as three teams (Chicago, St. Louis and Pittsburgh) fought into the last weekend of the season. On the season's final day, Sunday, October 3, Chicago split a doubleheader with Pittsburgh, winning the darkness-shortened seven-inning nightcap, 3-0; this combined with St. Louis' 6-2 win over Kansas City, knocked Pittsburgh back to third (albeit just a half-game behind), with Chicago and St. Louis in a virtual tie for first. But since the Whales (86-66) played two fewer games than the St. Louis Terriers (87-67), they were awarded the pennant based on their slightly better winning percentage (.566 to .565). Pittsburgh, with one game unplayed, ended up at 86-67 (.562).

During the 1914-15 offseason, Federal League owners brought an antitrust lawsuit against the American and National Leagues. The lawsuit ended up in the court of Federal Judge (and future Commissioner of Baseball) Kenesaw Mountain Landis, who allowed the case to languish while he urged both sides to negotiate. Swift action might have made a difference, but without the lawsuit going forward, the Federals found themselves in deepening financial straits.

After the 1915 season the owners of the American and National Leagues bought out half of the owners (Pittsburgh, Newark, Buffalo, and Brooklyn) of the Federal League teams. Two Federal League owners were allowed to buy struggling franchises in the established leagues: Phil Ball, owner of the St. Louis Terriers, was allowed to buy the St. Louis Browns of the AL, and Charles Weeghman, owner of the Chicago Whales, bought the Chicago Cubs. Both owners merged their teams into the established ones. The Kansas City franchise had been declared bankrupt and taken over by the league office after the close of the regular season, and the Baltimore owners rejected the offer made to them. They had sought to buy and move an existing franchise to their city, but were rebuffed, and sued unsuccessfully.

One of baseball's most famous ballparks was originally built for a Federal League team: Wrigley Field, the home of the Chicago Cubs, began its long life as Weeghman Park, the home of the Chicago Whales. Marc Okkonen, in his book on the Federal League, referred to Wrigley as a "silent monument" to the failed Federal League experiment. Otherwise, few visible remnants were left by the short-lived Federal League. The Baltimore entry sold their facility to the Baltimore Orioles of the International League, who renamed it Oriole Park and played there for nearly 30 years before it was destroyed by fire. The Newark ballpark was also used for minor league ball for a short time. 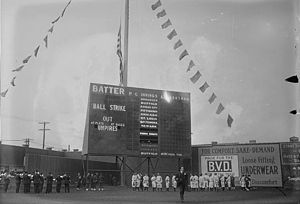 Washington Park III in Brooklyn, completed after the 1915 season was underway, looked a lot like Chicago's Weeghman Park. It was used for various sports venues until the end of 1917 and then for storage until Brooklyn Edison Electric bought the property in 1925 and shortly thereafter tore it down. One wall still stands.[7]

The other "silent monument" to the Federal League is a famous legal decision. In 1922, the Supreme Court ruled in Federal Baseball Club v. National League (brought by the Terrapins, one of the teams which had not been bought out), that Major League Baseball and its constituent leagues were primarily entertainment, not conventional interstate commerce, and thus were exempt from the Sherman Antitrust Act.[1] Though significantly weakened in the 1970s, this exemption remains intact 99 years later; however it has been eroded by subsequent court rulings and legislation regarding issues specific to Major League Baseball.

Of the locations of teams in the Federal League, five currently have major league teams. Those are Baltimore, Chicago, Kansas City, Pittsburgh and St. Louis. Brooklyn has a New York–Penn League team, known as the Brooklyn Cyclones. (The major league Brooklyn Dodgers moved to Los Angeles in 1958, although the New York Mets have been located in the adjacent borough of Queens since 1964.) Buffalo and Indianapolis have International League teams, the Buffalo Bisons and Indianapolis Indians, respectively. Newark had a team, the Bears, in the independent Can-Am League, which folded after the 2012 season.

There is at least one achievement of note that happened in Federal League play. Eddie Plank, pitching for the St. Louis Terriers, won his milestone 300th game on September 14, 1915, at St. Louis' Handlan's Park, becoming the first 300-game winning left-hander in the history of major league baseball and one of only six as of 2018. However, that milestone was not acknowledged by Major League Baseball until 1968.

The Federal League was the last serious attempt at creating a "Third Major League" outside the established structure of professional baseball in the U.S. There was one further attempt at creating a third league – the Continental League in 1959 – but its founders had hoped to find their place within the purview of organized baseball. The Continental League disbanded in 1960 without ever playing a game, making the Federal League the last such league to ever take to the field.

The Federal League features prominently in Ring Lardner's sports humor book You Know Me Al (1916), in which the protagonist pitches for the Chicago White Sox and repeatedly threatens to jump to the Federal League whenever he feels underappreciated or underpaid.[9]

Players in the Baseball Hall of Fame who played in the Federal League are listed below. Each of these players was elected via the Veterans Committee. 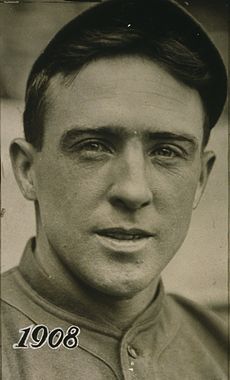 Per final regular season standings, as there was no postseason.