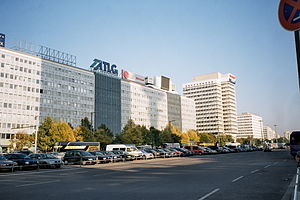 Seat in Berlin on Alexanderplatz

The Federal Ministry for the Environment, Nature Conservation, Building and Nuclear Safety, (German: Bundesministerium für Umwelt, Naturschutz, Bau und Reaktorsicherheit), abbreviated BMUB, is a cabinet-level ministry of the Federal Republic of Germany. It is headquartered in Bonn with a branch office in Berlin. The current minister of the environment is Barbara Hendricks, who assumed office on December 17, 2013.[1]

The ministry was established on June 6, 1986 in response to the Chernobyl disaster. The then Federal Government wanted to combine environmental authority under a new minister in order to face new environmental challenges more effectively. Prior to this responsibilities for environmental issues were distributed among the ministries of the Interior, Agriculture and Health.

The ministry's primary functions include:[2]

The ministry is led by the Minister for the Environment, Nature Conservation, Building and Nuclear Safety. The current Minister is Barbara Hendricks, appointed by Chancellor Angela Merkel. The minister is supported by two parliamentary state secretaries (members of the cabinet and federal government, "deputy ministers") and two career state secretaries (public servants)[3] who manage the ministry's nine directorates:[4]