The Federal Ministry of Finance (German: Bundesministerium der Finanzen), abbreviated BMF, is the cabinet-level finance ministry of Germany, with its seat at the Detlev-Rohwedder-Haus in Berlin and a secondary office in Bonn. The current Federal Minister of Finance is Wolfgang Schäuble (CDU).

In German politics, the Ministry of Finance beside the Interior, Foreign, Justice and Defence ministries is counted as one of the "classical portfolios" (denoted by the definite article der), which were also part of the first German government under Otto von Bismarck following the Unification of 1871. 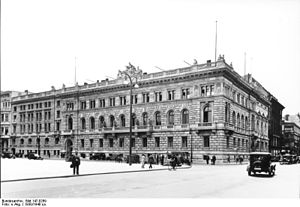 Fiscal policy in the German Empire was predominantly the domain of the various states responsible for all direct taxation according to the 1833 Zollverein treaties. The federal government merely received indirect contributions from the states. Matters of fiscal policy at the federal level initially was the exclusive responsibility of the German Chancellery under Otto von Bismarck. However, in 1877 a special finance department was established, which with effect from 14 July 1879 was separated from the chancellery as the Imperial Treasury (Reichsschatzamt), a federal agency in its own right. With its seat vis-à-vis on Wilhelmplatz in Berlin, it was first headed by a subsecretary, and from 1880 by a Secretary of State only answerable to the chancellor.

After World War I, the newly established Weimar Republic had to face huge reparations and a fiscal emergency. To cope with the implications, the former Reichsschatzamt in 1919 was re-organised as a federal ministry, the Reichsministerium der Finanzen, as supreme financial authority headed by a federal minister. Besides a Reich Treasury Ministry (Reichsschatzministerium) was established for the administration of the federal property, both agencies were merged in 1923.

Already in the German cabinet of Chancellor Franz von Papen, Undersecretary Lutz Graf Schwerin von Krosigk was appointed Finance Minister in 1932, an office he held throughout the Nazi era until 1945. The ministry played a vital role in financing the German re-armament, in the "Aryanization" of Jewish property ("Reich Flight Tax"), German war economy, and the plundering of occupied countries in World War II. The budget deficit had already reached heady heights on the eve of the war, aggrandised by hidden Mefo and Oeffa bill financing. In turn, saving banks and credit institutions were obliged to sign war bonds while price stability was enforced by government intervention and the German public was called up to bank surplus money.

After World War II the ministry was re-established in 1949 and renamed the West German Bundesministerium der Finanzen.[1] Since 1999, the Detlev-Rohwedder-Haus (former Air Ministry Building) in Berlin has been the headquarters of the ministry. 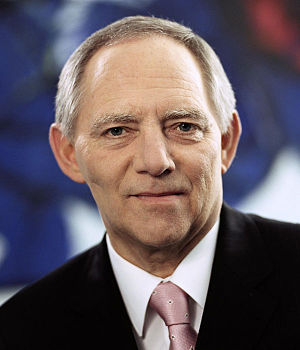 The Ministry is the supreme federal authority in revenue administration and governs a number of subordinate federal, intermediate, and local authorities such as the Federal Centre for Data Processing and Information Technology (ZIVIT). The Ministry’s wider portfolio includes public-law agencies and corporations such as the Federal Finance Regulator (BaFin) and Real Estate regulatory bodies. The finance minister is the only cabinet minister who can veto a decision of the government if it would lead to additional expenditure.

The Finance Ministry is responsible for all aspects of tax and revenue policy in Germany and plays a significant role in European Union policy. It has nine directorates-general:[2] 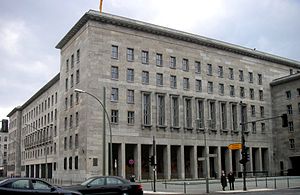 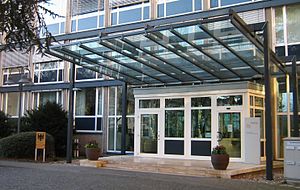 entrance to the headquarters in Bonn

Legally independent entities in the Ministry's wider portfolio include: