Federal Ministry of the Interior (Germany) 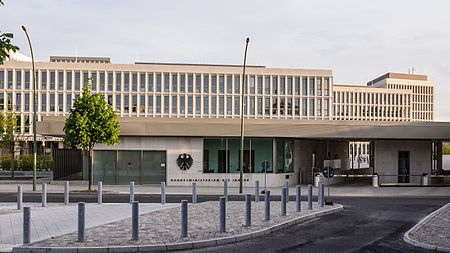 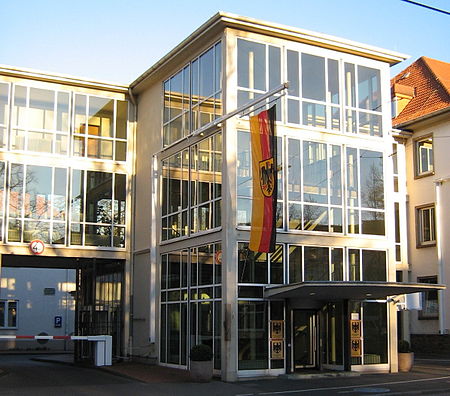 The Federal Ministry of the Interior (German: Bundesministerium des Innern), abbreviated BMI, is cabinet-level ministry of the Federal Republic of Germany. Its main office is in Berlin, with a secondary seat in Bonn. The current minister of the interior is Thomas de Maizière.

The Reichsamt des Innern (Imperial Office of the Interior) was the Ministry of the Interior of the German Empire. On the proposal of the Reichskanzler Otto von Bismarck in was created on 24 December 1879 by an Imperial decree from the Reich Chancellery. Like the other Imperial Offices it was directly under the control of the Reichskanzler. The seat of the office was in Berlin and it was managed by a Secretary of State, who from 1881 until 1916 also simultaneously held the office of Vizekanzler. The gazette for the publication of official notices was run by the Office from 1880. Entitled the Zentralblatt für das Deutsche Reich (ZBl), it had been published by the Reich Chancellery from 1873 until 1879.

In 1945, the Imperial Ministry of the Interior was succeeded by the present Federal Ministry.

The Ministry of the Interior is responsible for internal security and the protection of the constitutional order, for civil protection against disasters and terrorism, for displaced persons, administrative questions, and sports. It is host to the Standing Committee of Interior Ministers and also drafts all passport, identity card, firearms, and explosives legislation. The ministry also houses the Joint Anti-Terrorism Center formed in 2004 which is an information-sharing and analytical forum for all German police and intelligence agencies involved in the fight against terrorism.

The minister is supported by two parliamentary state secretaries and two state secretaries who manage the ministry's various departments. One of the latter manages "P", "B", "IS" and "M" departments plus the crisis management cell and the working group on counter-intelligence development. The other supervises "Z", "G", "D", "O", "SP" and "V" departments plus the information technology director, data protection and freedom of information office and the doping task force.