The FOMC is the principal organ of United States national monetary policy. The Committee sets monetary policy by specifying the short-term objective for the Fed's open market operations, which is usually a target level for the federal funds rate (the rate that commercial banks charge between themselves for overnight loans).

Five of the Federal Reserve Bank presidents serve one-year terms on a rotating basis. The rotating seats are filled from the following four groups of banks, one bank president from each group: Boston, Philadelphia, and Richmond; Cleveland and Chicago; Atlanta, St. Louis, and Dallas; and Minneapolis, Kansas City, and San Francisco. The New York President always has a voting membership.

All of the Reserve Bank presidents, even those who are not currently voting members of the FOMC, attend Committee meetings, participate in discussions, and contribute to the Committee's assessment of the economy and policy options. The Committee meets eight times a year, approximately once every six weeks. 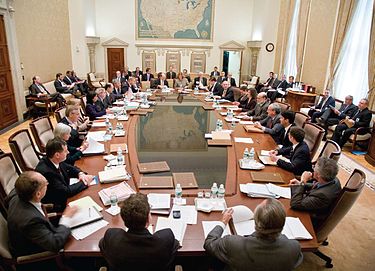 By law, the FOMC must meet at least four times each year in Washington, D.C. Since 1981, eight regularly scheduled meetings have been held each year at intervals of five to eight weeks. If circumstances require consultation or consideration of an action between these regular meetings, members may be called on to participate in a special meeting or a telephone conference, or to vote on a proposed action by proxy. At each regularly scheduled meeting, the Committee votes on the policy to be carried out during the interval between meetings, requiring members to think ahead.

Attendance at meetings is restricted because of the confidential nature of the information discussed and is limited to Committee members, nonmember Reserve Bank presidents, staff officers, the Manager of the System Open Market Account, and a small number of Board and Reserve Bank staff.[4]

Before each regularly scheduled meeting of the FOMC, System staff prepare written reports on past and prospective economic and financial developments that are sent to Committee members and to nonmember Reserve Bank presidents. Reports prepared by the Manager of the System Open Market Account on operations in the domestic open market and in foreign currencies since the last regular meeting are also distributed. At the meeting itself, staff officers present oral reports on the current and prospective business situation, on conditions in financial markets, and on international financial developments.

In its discussions, the Committee considers factors such as trends in prices and wages, employment and production, consumer income and spending, residential and commercial construction, business investment and inventories, foreign exchange markets, interest rates, money and credit aggregates, and fiscal policy. The Manager of the System Open Market Account also reports on account transactions since the previous meeting.

After these reports, the Committee members and other Reserve Bank presidents turn to policy. Typically, each participant expresses his own views on the state of the economy and prospects for the future and on the appropriate direction for monetary policy. Then each makes a more explicit recommendation on policy for the coming intermeeting period (and for the longer run, if under consideration).[4]

Finally, the Committee must reach a consensus regarding the appropriate course for policy, which is incorporated in a directive to the Federal Reserve Bank of New York—the Bank that executes transactions for the System Open Market Account. The directive is cast in terms designed to provide guidance to the Manager in the conduct of day-to-day open market operations. The directive sets forth the Committee's objectives for long-run growth of certain key monetary and credit aggregates.[4]

It also sets forth operating guidelines for the degree of ease or restraint to be sought in reserve conditions and expectations with regard to short-term rates of growth in the monetary aggregates. Policy is implemented with emphasis on supplying reserves in a manner consistent with these objectives and with the nation's broader economic objectives.[4]

Under the Federal Reserve Act, the Chairman of the Board of Governors of the Federal Reserve System must appear before Congressional hearings at least twice per year regarding “the efforts, activities, objectives and plans of the Board and the Federal Open Market Committee with respect to the conduct of monetary policy”. The statute requires that the Chairman appear before the House Committee on Financial Services in February and July of odd-numbered years, and before the Senate Committee on Banking, Housing, and Urban Affairs in February and July of even-numbered years.[5]

The committee's practice of interest rate targeting has been criticized by some commentators who argue that it may risk an inflationary bias.

Possible alternative rules that enjoy some support among economists include the traditional monetarist formula of targeting stable growth in an appropriately chosen monetary aggregate, and inflation targeting, now practiced by many central banks. Under inflationary pressure in 1979, the Fed temporarily abandoned interest rate targeting in favor of targeting non-borrowed reserves. It concluded, however, that this approach led to increased volatility in interest rates and monetary growth, and reversed itself in 1982.[6][7][8]

Former Fed Chairman Ben Bernanke spoke sympathetically as a Governor in 2003 of the inflation targeting approach. He explained that even a central bank like the Fed, which does not orient its monetary policies around an explicit, published inflation target, nonetheless takes account of its goal of low and stable inflation in formulating its interest rate targets. Bernanke summed up his overall assessment of inflation targeting as follows:

Inflation targeting, at least in its best-practice form, consists of two parts: a policy framework of constrained discretion and a communication strategy that attempts to focus expectations and explain the policy framework to the public. Together, these two elements promote both price stability and well-anchored inflation expectations; the latter in turn facilitates more effective stabilization of output and employment. Thus, a well-conceived and well-executed strategy of inflation targeting can deliver good results with respect to output and employment as well as inflation.

Although communication plays several important roles in inflation targeting, perhaps the most important is focusing and anchoring expectations. Clearly there are limits to what talk can achieve; ultimately, talk must be backed up by action, in the form of successful policies. Likewise, for a successful and credible central bank like the Federal Reserve, the immediate benefits of adopting a more explicit communication strategy may be modest. Nevertheless, making the investment now in greater transparency about the central bank's objectives, plans, and assessments of the economy could pay increasing dividends in the future.[9]

In keeping with his 2003 speech as Governor, Bernanke as Chairman has attempted to promote greater transparency in Fed communications. The Fed now publicly indicates the range within which it would like to see future inflation.

Federal Reserve Bank Rotation on the FOMC
Committee membership changes at the first regularly scheduled meeting of the year.

(Note: For the Federal Reserve Bank of New York, the First Vice President is the alternate for the President.)