From Infogalactic: the planetary knowledge core
(Redirected from Federal style)
Jump to: navigation, search
Not to be confused with Federation architecture. 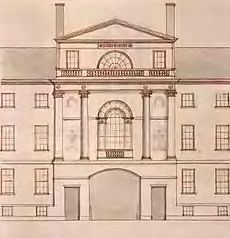 Federal-style architecture is the name for the classicizing architecture built in North America between c. 1780 and 1830, and particularly from 1785 to 1815, mostly from the two brothers, Robert Adam and James Adam.[1] This style shares its name with its era, the Federal Period. The name Federal style is also used in association with furniture design in the United States of the same time period. The style broadly corresponds to the classicism of Biedermeier style in the German-speaking lands, Regency style in Britain and to the French Empire style. 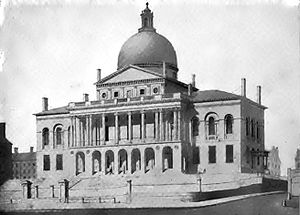 Massachusetts State House (1798, in a drawing by Alexander Jackson Davis, 1827 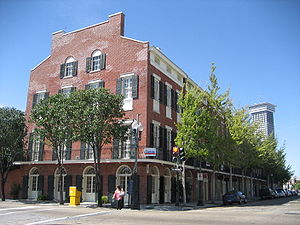 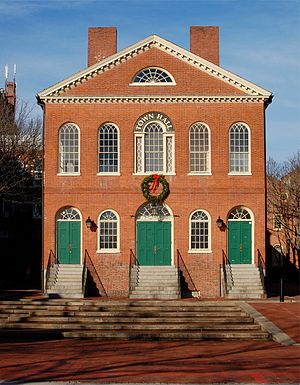 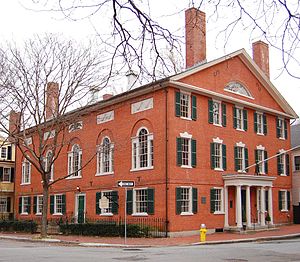 Hamilton Hall was built in 1805 by Samuel McIntire in Salem, Massachusetts.

In the early American republic, the founding generation consciously chose to associate the nation with the ancient democracies of Greece and the republican values of Rome. Grecian aspirations informed the Greek Revival, lasting into the 1850s. Using Roman architectural vocabulary,[2] the Federal style applied to the balanced and symmetrical version of Georgian architecture that had been practiced in the American colonies' new motifs of neoclassical architecture as it was epitomized in Britain by Robert Adam, who published his designs in 1792.

American Federal architecture differs from preceding Georgian colonial interpretations in its use of plainer surfaces with attenuated detail, usually isolated in panels, tablets, and friezes. It also had a flatter, smoother façade and rarely used pilasters. It was most influenced by the interpretation of ancient Roman architecture, fashionable after the unearthing of Pompeii and Herculaneum. The bald eagle was a common symbol used in this style, with the ellipse a frequent architectural motif.

The classicizing manner of constructions and town planning undertaken by the federal government was expressed in federal projects of lighthouses and harbor buildings; hospitals; in the rationalizing, urbanistic layout of L'Enfant's city of Washington; and in New York the Commissioners' Plan of 1811.[3]

In two generations during which a gentleman's education included the ability to draw up an idiomatic classical elevation[4] for craftsmen who were themselves trained in the classical vocabulary, and where masons and house carpenters on their own produced a refined vernacular architecture, this American neoclassical high style was the idiom of America's first professional architects, in the generation of c. 1800, men such as Charles Bulfinch, architect of the Massachusetts State House, Boston, and Minard Lafever.

In Salem, Massachusetts, there are numerous examples of American colonial architecture and Federal architecture in two historic districts: Chestnut Street District, which is part of the Samuel McIntire Historic District containing 407 buildings, and the Salem Maritime National Historic Site, consisting of 12 historic structures and about 9 acres (36,000 m2) of land along the waterfront.

Architects of the Federal period