The British Academy is the United Kingdom's national academy for the humanities and the social sciences.

The British Academy was established in 1902 and received its Royal Charter in the same year. It is now a fellowship of more than 900 leading scholars spanning all disciplines across the humanities and social sciences. The Academy is a self-governing and independent registered charity, based at 10–11 Carlton House Terrace in London.

The Academy states its fundamental purposes under four headings:

The British Academy's royal seal depicts the Greek muse Clio. She was redrawn by designer and illustrator Debbie Cook in 2008.

The creation of a "British Academy for the Promotion of Historical, Philosophical and Philological Studies" was first proposed in 1899 in order that Britain could be represented at meetings of European and American academies. The organisation, which has since become simply "the British Academy", was initiated as an unincorporated society on 17 December 1901, and received its Royal Charter from King Edward VII on 8 August 1902.[2]

Since then, many of Britain's most distinguished scholars in the humanities and social sciences have been involved in the life of the Academy, including John Maynard Keynes, Isaiah Berlin, C. S. Lewis and Henry Moore.

Until 1927–28 the Academy had no premises. Then it moved to some rooms in No. 6 Burlington Gardens. In 1968 it moved the short distance to Burlington House. It subsequently moved to headquarters near Regent's Park. Then in 1998 the Academy moved to its present headquarters in Carlton House Terrace. Overlooking St James's Park, the Terrace was designed by John Nash and built in the 1820s and 1830s. Number 10 was formerly the London residence of the Ridley family and number 11 was from 1856 to 1875 the home of Prime Minister William Gladstone.

In March 2010, the Academy embarked on a £2.75m project to renovate and restore the public rooms in No. 11, following the departure of former tenant the Foreign Press Association, and link the two buildings together. The work was completed in January 2011 and the new spaces include a new 150-seat Wolfson Auditorium are available for public hire.

The history, problems and achievements of the Academy have been recorded in works by two of its Secretaries. Sir Frederic Kenyon’s volume of 37 pages covers the years up to 1951;[3] Sir Mortimer Wheeler’s volume covers the years 1949 to 1968.[4] 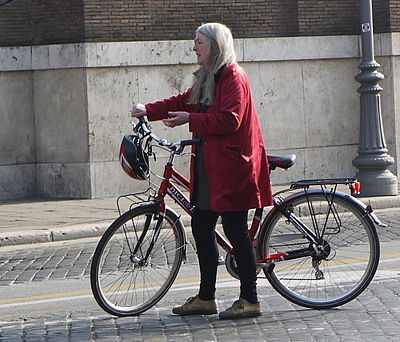 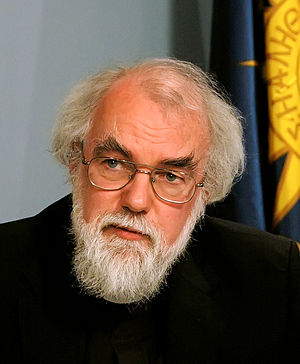 Election as a Fellow of the British Academy recognises high scholarly distinction in the humanities or social sciences, evidenced by published work. Fellows may use the letters FBA after their names. Fellows are elected into one of the following disciplinary sections:[5]

There are also three 'ginger groups' to address the specific needs of Management and Business Studies, Education, and Cultural, Communications, Media & Performance Studies. 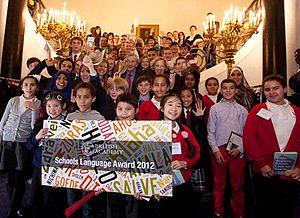 The British Academy has awarded prizes of £4,000 to 15 schools across the UK for encouraging innovative and creative foreign language teaching under the Schools Language Awards.

The British Academy channels substantial public funding into support for individuals and organisations pursuing humanities and social sciences research and scholarship in the UK and overseas. These funding schemes are designed to aid scholars at different stages of their academic career and include Postdoctoral Fellowships, Wolfson Research Professorships, Leverhulme Senior Research Fellowships, Small Research Grants and British Academy Research Projects.

In addition to its main public funds supported by the Department for Business, Innovation and Skills, the Academy also draws on private funds arising from gifts, legacies, contributions made by Fellows and grants from research foundations to support a further range of research activities. In 2014/15, the Academy received around £30m to support research and researchers across the humanities and social sciences. Funds available to the Academy were invested in the following main areas: research career development; a portfolio of research grant opportunities, and international engagement. The demand and quality of applications submitted for Academy funding remains high. This year the Academy received around 3,600 applications and made 588 awards to scholars based in around 100 different universities across the UK – a success rate of 16%. 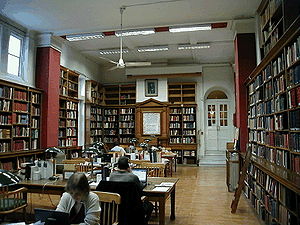 British School at Athens, one of the six major British overseas research institutes supported by the British Academy.

In order to promote the interests of UK research and learning around the world, the Academy works to create frameworks to support international networking and collaboration and develop the role of humanities and social sciences research in tackling global challenges. It draws on expertise from a wide range of sources from within the fellowship and on specialist advice from its seven Area Panels for Africa, China, the Middle East, Europe, South Asia, and Latin America/Caribbean.

The Academy also funds and coordinates a network of overseas institutes which provide local expertise, logistical support and often a working base for UK scholars. These include research institutes in Amman, Ankara, Athens, Jerusalem, Nairobi, Rome and Tehran, as well as UK-based specialist learned societies which run strategic research programmes in other parts of the world including Africa, Latin America and South and South East Asia.

As the UK's national voice for the humanities and social sciences, the British Academy seeks to promote and protect the interests and health of these disciplines and their research base. It makes independent representations to the Government and other bodies on relevant Higher Education and Research issues, contributes statements and submissions to formal consultations and organises a range of policy events and discussions, liaising regularly with learned societies, universities, national academies and other relevant organisations.

The Centre was established in October 2009 initially funded by the Economic and Social Research Council and the Arts and Humanities Research Council from March 2010. It oversees a programme of activity engaging the expertise within the humanities and social sciences to shed light on policy issues. 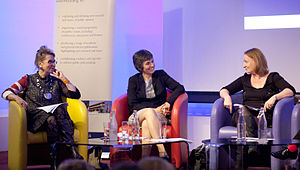 Three of the speakers at a recent British Academy panel discussion Where are all the women?

The British Academy organises a wide-ranging annual programme of more than 50 public lectures, panel discussions, conferences and seminars showcasing new research and debating topical issues. This includes a number of long-established lecture series, such as the Shakespeare Lecture, first given in 1911. Most events are free and most take place at the Academy’s headquarters in Carlton House Terrace.

The President's Medal rewards signal service to the cause of the humanities and social sciences.

The British Academy awards a total of 15 Prizes and Medals, most of them awarded annually.

Presidents of the British Academy, 1902–present

Secretaries of the British Academy, 1902–present