From Infogalactic: the planetary knowledge core
(Redirected from Fellow of the Geological Society)
Jump to: navigation, search 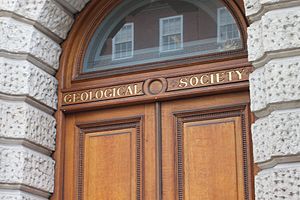 The Geological Society of London (also known as the Geological Society[1]) is a learned society based in the United Kingdom. It is the oldest national geological society in the world and the largest in Europe with over 12,000 Fellows. Fellows are entitled to the postnominal FGS (Fellow of the Geological Society), over 2,000 of whom are Chartered Geologists (CGeol). The Society is a Registered Charity, No. 210161. It is also a member of the Science Council, and is licensed to award Chartered Scientist to qualifying members.

The mission of the society:
"Making geologists acquainted with each other, stimulating their zeal, inducing them to adopt one nomenclature, facilitating the communication of new facts and ascertaining what is known in their science and what remains to be discovered".[2]

Since 1874, the Society has been based at Burlington House, Piccadilly, London. This building houses the Society's library, which contains more than 300,000 volumes of books and journals.[3] It is a member of the UK Science Council.

In 1991 it merged with the Institution of Geologists, which had been formed in 1977 to represent the geological profession.[4]

The Society celebrated its bicentenary in 2007. It ran programmes in the geosciences in Britain and abroad, under the auspices of the science writer and palaeontologist Professor Richard Fortey, the president that year.

The Society has 24 specialist groups and 15 regional groups which serve as an opportunity for those with specific interests to meet and discuss their subject or region. They are all free for members to join and some are open to non-members.[5]

The Regional Groups are:

The Specialist Groups are:

The society publishes two of its own journals, the (formerly Quarterly) Journal of the Geological Society and the Quarterly Journal of Engineering Geology and Hydrogeology. It also publishes the magazine Geoscientist for Fellows, and has a share in Geology Today, published by Blackwell Science.

Main article: President of the Geological Society of London

In 1831 it began issuing an annual scientific award for geology, known as the Wollaston Medal. This is still the Society's premier medal, which in 2006 was awarded to James Lovelock, the originator of the Gaia Hypothesis.

Medals awarded by the Society

Funds administered by the Society