In geology felsic refers to igneous rocks that are relatively rich in elements that form feldspar and quartz.[1] It is contrasted with mafic rocks, which are relatively richer in magnesium and iron (ferric). It refers to those rocks rich in silicate minerals, magma, and rocks which are enriched in the lighter elements such as silicon, oxygen, aluminium, sodium, and potassium.

In modern usage, the term acid rock, although sometimes used as a synonym, refers to a high-silica-content (greater than 63% SiO2 by weight) volcanic rock, such as rhyolite.

The term was used more broadly in older geologic literature. It is considered archaic now, as the terms "acidic" and "basic rock" were based on an incorrect idea, dating from the 19th century, that silicic acid was the chief form of silicon occurring in rocks. 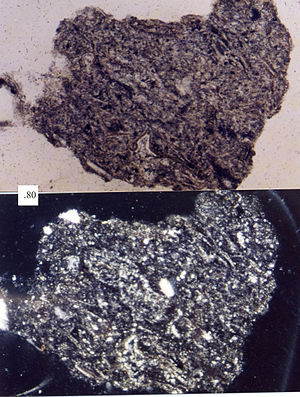 A felsic volcanic lithic fragment, as seen in a petrographic microscope. Scale box is in millimeters.

In order for a rock to be classified as felsic, it generally needs to contain more than 75% felsic minerals; namely quartz, orthoclase and plagioclase. Rocks with greater than 90% felsic minerals can also be called leucocratic, meaning 'light-coloured'.[citation needed]

Felsite is a petrologic field term used to refer to very fine-grained or aphanitic, light-colored volcanic rocks which might be later reclassified after a more detailed microscopic or chemical analysis.

In some cases, felsic volcanic rocks may contain phenocrysts of mafic minerals, usually hornblende, pyroxene or a feldspar mineral, and may need to be named after their phenocryst mineral, such as 'hornblende-bearing felsite'.

The chemical name of a felsic rock is given according to the TAS classification of Le Maitre (1975). However, this only applies to volcanic rocks. If the rock is analyzed and found to be felsic but is metamorphic and has no definite volcanic protolith, it may be sufficient to simply call it a 'felsic schist'. There are examples known of highly sheared granites which can be mistaken for rhyolites.

For phaneritic felsic rocks, the QAPF diagram should be used, and a name given according to the granite nomenclature. Often the species of mafic minerals is included in the name, for instance, hornblende-bearing granite, pyroxene tonalite or augite megacrystic monzonite, because the term "granite" already assumes content with feldspar and quartz.

The rock texture thus determines the basic name of a felsic rock. 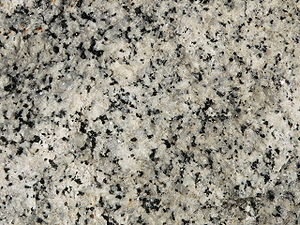 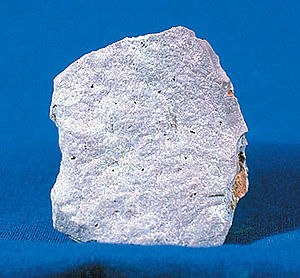 A specimen of rhyolite.