The female reproductive system (or female genital system) contains two main parts: the uterus, which hosts the developing fetus, produces vaginal and uterine secretions, and can pass sperm through to the Fallopian tubes; and the ovaries, which produce the female's egg cells. These parts are internal; the vagina meets the external organs at the vulva, which includes the labia, clitoris and urinary meatus. The vagina is attached to the uterus through the cervix, while the uterus is attached to the ovaries via the Fallopian tubes. At certain intervals, the ovaries release an ovum, which passes through the Fallopian tube into the uterus. If, in this transit, it meets with sperm, a single sperm can enter and merge with the egg, fertilizing it. Corresponding equivalent among males is the male reproductive system.

During the reproductive process, the egg is not a passive recipient, but rather an active participant in the fertilization process. It releases certain molecules that are essential to guiding the sperm which allow the surface of the egg to attach to the sperm's surface. The egg can then absorb the sperm and fertilization begins.[1] The fertilization usually occurs in the oviducts, but can happen in the uterus itself. A zygote will then divide over enough generations of cells to form a blastocyst, which implants itself in the wall of the uterus, where it begins the processes of embryogenesis and morphogenesis. When developed enough to survive outside the womb, the cervix dilates and contractions of the uterus propel the fetus through the birth canal, which is the vagina.

The ova are larger than sperm and have formed by the time a female is born. Approximately every month, a process of oogenesis matures one ovum to be sent down the Fallopian tube attached to its ovary in anticipation of fertilization. If not fertilized, this egg is flushed out of the system through menstruation. 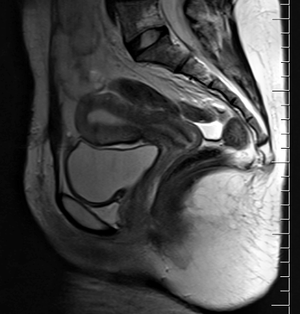 Sagittal MRI showing the location of the vagina, cervix and uterus 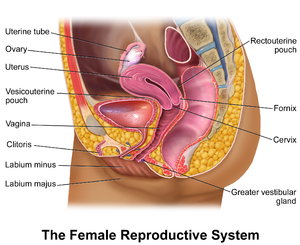 The vagina is a fibro-muscular tubular tract leading from the uterus to the exterior of the body in female mammals, or to the cloaca in female birds and some reptiles. Female insects and other invertebrates also have a vagina, which is the terminal part of the oviduct. The vagina is the place where semen from the male penis is deposited into the female's body at the climax of sexual intercourse, a phenomenon commonly known as ejaculation. The vagina is a canal that joins the cervix (the lower part of uterus) to the outside of the body. It also is known as the birth canal.

The cervix is the lower, narrow portion of the uterus where it joins with the top end of the vagina. It is cylindrical or conical in shape and protrudes through the upper anterior vaginal wall. Approximately half its length is visible to the naked eye, the remainder lies above the vagina beyond view. The vagina has a thick layer outside and it is the opening where the fetus emerges during delivery. The cervix is also named the neck of the uterus.

The uterus or womb is the major female reproductive organ of humans. The uterus provides mechanical protection, nutritional support, and waste removal for the developing embryo (weeks 1 to 8) and fetus (from week 9 until the delivery). In addition, contractions in the muscular wall of the uterus are important in pushing out the fetus at the time of birth.

The uterus is a pear-shaped muscular organ. Its major function is to accept a fertilized ovum which becomes implanted into the endometrium, and derives nourishment from blood vessels which develop exclusively for this purpose. The fertilized ovum becomes an embryo, develops into a fetus and gestates until childbirth. If the egg does not embed in the wall of the uterus, a female begins menstruation.

The Fallopian tubes or oviducts are two tubes leading from the ovaries of female mammals into the uterus. On maturity of an ovum, the follicle and the ovary's wall rupture, allowing the ovum to escape and enter the Fallopian tube. There it travels toward the uterus, pushed along by movements of cilia on the inner lining of the tubes. This trip takes hours or days. If the ovum is fertilized while in the Fallopian tube, then it normally implants in the endometrium when it reaches the uterus, which signals the beginning of pregnancy.

The ovaries are small, paired organs that are located near the lateral walls of the pelvic cavity. These organs are responsible for the production of the ova and the secretion of hormones. Ovaries are the place inside the female body where ova or eggs are produced. The process by which the ovum is released is called ovulation. The speed of ovulation is periodic and impacts directly to the length of a menstrual cycle.

After ovulation, the ovum is captured by the oviduct, after traveling down the oviduct to the uterus, occasionally being fertilized on its way by an incoming sperm, leading to pregnancy and the eventual birth of a new human being.

The Fallopian tubes are often called the oviducts and they have small hairs (cilia) to help the egg cell travel.

The reproductive tract (or genital tract) is the lumen that starts as a single pathway through the vagina, splitting up into two lumens in the uterus, both of which continue through the Fallopian tubes, and ending at the distal ostia that open into the abdominal cavity.

In the absence of fertilization, the ovum will eventually traverse the entire reproductive tract from the fallopian tube until exiting the vagina through menstruation.

The reproductive tract can be used for various transluminal procedures such as fertiloscopy, intrauterine insemination and transluminal sterilization.

There are surgical procedures which change the appearance of external female genitalia. Clitoral hood reduction, also known as clitoridotomy, is a procedure intended to reposition the protruding clitoris and reduce the length and projection of the clitoral hood. The procedure is indicated in women with mild clitoral enlargement who are unwilling to undergo a formal clitoris reduction.[3]

Clitoral hood removal, also known as hoodectomy, is a cosmetic surgery intended to enhance a female's sexual experience. This surgery involves the trimming back of the clitoral hood or a complete clitoris hood removal.[4] Removal of the protective hood allows for more clitoral exposure which increases sensitivity in the clitoris. This procedure, sometimes called female circumcision, is different from a clitoral excision and is not intended to prevent a woman from experiencing sexual pleasure.[5] Clitoral reduction is indicated to reduce the size of the clitoris which may be enlarged due to hormonal abnormalities, ingestion of steroids, or birth. Surgery can reduce the glans or shaft of the clitoris through an outpatient procedure.[6]

Female genital mutilation (FGM) is defined by the United Nations (UN) and World Health Organization (WHO) as the complete or partial removal of the female genital organs or any other harmful injury inflicted on them for cultural, religious, or recreational reasons. FGM has deep roots in historical, religious, and cultural traditions. It has become a topic of debate in the 21st century because most people argue that it is inhumane and unsafe. Feminists argue that it is a form of subjugation of women and gender-based discrimination.[7] Contrary to surgical procedures intended to enhance a woman's sexual experience or her physical appearance, female genital mutilation does not have cosmetic or health benefits and can be harmful to the emotional and physical well-being of those it is inflicted upon.[8] This kind of procedure may have complications including, but not limited to, severe bleeding, tetanus, sepsis, urine retention, open sores in the genital area, irreparable tissue damage, potential childbirth complications, infertility, and death.[8] The practice of female genital mutilation is common in the western, eastern and north-eastern regions of Africa. It also takes place in some countries in Asia and the Middle East. The mutilation is practiced by some immigrant communities in North America and Europe.[8] There are four types of genital mutilation. Type 1, also known as circumcision or Sunna (Arab word meaning tradition), is the excision of the prepuce, which is the fold of skin surrounding the clitoris. Type 2, also known as clitoridectomy, is the excision of the clitoris with partial or total removal of the labia minora, which are the smaller inner folds of the vulva. Type 3, also known as infibulation or pharaonic circumcision, is the excision of part or all of the external genitalia and stitching or narrowing of the vaginal opening. Type 4, which can include a range of procedures such as piercing, pricking, burning, scraping, cutting, or introduction of corrosive substances into the vagina.[7]

Type 1 (circumcision) and Type 2 (clitoridectomy) are the most common forms of FGM making up about 80% of cases and Type 3 is the most extreme form and makes up about 15%. Type 3 is commonly a practice of choice in several African countries. The risks of FGM include physical, sexual, psychological, and pregnancy consequences. The procedure is done in a secluded area in the home and the child may be blindfolded or allowed to see where it will take place. Once they arrive the girl is often immobilized on her back with her legs spread apart so that the procedure may be performed. After the procedure is finished the girl’s legs are bounded together and left in a secluded area to recover for 40 days. The people who perform the “surgical” procedure are usually untrained midwives or elderly women and they more than often use unsterilized razor blades, scissors, knives, broken glass, sharp rocks, or even their teeth. This and the binding of their legs cause infection in the uterus, fallopian tubes, and ovaries. Research has shown that circumcised women have significantly lower levels of self-esteem as opposed to uncircumcised women. [7]

Diseases of the vagina

Vaginitis is one of the most common infections in the female reproductive system. It is difficult to determine the organism most responsible for vaginitis because it varies from range of age, sexual activity, and method of microbial identification. Vaginitis is not necessarily a sexually transmitted disease due to many infectious agents that make use of the close proximity to mucous membranes and secretions. Vaginitis is usually diagnosed based on the presence of vaginal discharge, which can have a certain color, odor, or quality.[9]

Yeast infection is a common cause of vaginal irritation and according to the Centers for Disease Control and Prevention (CDC) at least 75% of adult women have experienced one at least once in their lifetime. Yeast infections are caused by an overgrowth of fungus in the vagina known as Candida. Yeast infections are usually caused by an imbalance of the pH in the vagina, which is usually acidic. Other factors such as pregnancy, diabetes, weakened immune systems, tight fitting clothing, or douching can also be a cause. Symptoms of yeast infections include itching, burning, irritation, and a white cottage-cheese-like discharge from the vagina. Women have also reported that they experience painful intercourse and urination as well. Taking a sample of the vaginal secretions and placing them under a microscope for evidence of yeast can diagnose a yeast infection. Treatment varies from creams that can be applied in or around the vaginal area to oral tablets that stop the growth of fungus.[9]

It is claimed in the Hippocratic writings that both males and females contribute their seed to conception; otherwise, children would not resemble either or both of their parents. Four-hundred years later, Galen "identified" the source of 'female semen' as the ovaries in female reproductive organs.[10]