The femur (/ˈfiːmər/) (pl. femurs or femora (/ˈfɛmoʊrə/)), or thighbone, is the most proximal (closest to the center of the body) bone of the leg in tetrapod vertebrates capable of walking or jumping, such as most land mammals, birds, many reptiles such as lizards, and amphibians such as frogs. In vertebrates with four legs such as dogs and horses, the femur is found only in the hindlimbs. The head of the femur articulates with the acetabulum in the pelvic bone forming the hip joint, while the distal part of the femur articulates with the tibia and kneecap forming the knee joint. By most measures the femur is the strongest bone in the body. The femur is also the longest bone in the body.

The femur is the only bone in the thigh. The two femurs converge medially toward the knees, where they articulate with the proximal ends of the tibiae. The angle of convergence of the femora is a major factor in determining the femoral-tibial angle. In females the femora converge more than in males because the pelvic bone is wider in females. In the condition genu valgum (knock knee) the femurs converge so much that the knees touch one another. The opposite extreme is genu varum (bow-leggedness). In the general population of people without either genu valgum or genu varum, the femoral-tibial angle is about 175 degrees.[1]

The femur is the longest and by most measures, the strongest bone in the human body. Its length on average is 26.74% of a person's height,[2] a ratio found in both men and women and most ethnic groups with only restricted variation, and is useful in anthropology because it offers a basis for a reasonable estimate of a subject's height from an incomplete skeleton.

The femur is categorised as a long bone and comprises a diaphysis, the shaft (or body) and two epiphysis or extremities that articulate with adjacent bones in the hip and knee.[1] 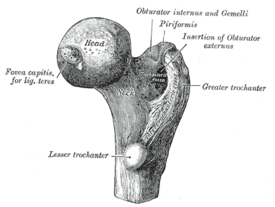 The upper extremity of right femur viewed from behind and above, showing head, neck, and the greater and lesser trochanter

The upper or proximal extremity (close to the torso) contains the head, neck, the two trochanters and adjacent structures.[1]

The head of femur, which articulates with the acetabulum of the pelvic bone, composes two-thirds of a sphere. It has a small groove, or fovea, connected through the round ligament to the sides of the acetabular notch. The head of the femur is connected to the shaft through the neck or collum. The neck is 4–5 cm. long and the diameter is smallest front to back and compressed at its middle. The collum forms an angle with the shaft in about 130 degrees. This angle is highly variant. In the infant it is about 150 degrees and in old age reduced to 120 degrees on average. An abnormal increase in the angle is known as coxa valga and an abnormal reduction is called coxa vara. Both the head and neck of the femur is vastly embedded in the hip musculature and can not be directly palpated. In skinny people with the thigh laterally rotated, the head of the femur can be felt deep as a resistance profound (deep) for the femoral artery.[1]

A slight ridge is sometimes seen commencing about the middle of the intertrochanteric crest, and reaching vertically downward for about 5 cm. along the back part of the body: it is called the linea quadrata (or quadrate line).

The body of the femur (or shaft) is long, slender and almost cylindrical in form. It is a little broader above than in the center, broadest and somewhat flattened from before backward below. It is slightly arched, so as to be convex in front, and concave behind, where it is strengthened by a prominent longitudinal ridge, the linea aspera which diverges proximal and distal as the medial and lateral ridge. Proximal the lateral ridge of the linea aspera becomes the gluteal tuberosity while the medial ridge continues as the pectineal line. Besides the linea aspera the shaft has two other bordes; a lateral and medial border. These three bordes separates the shaft into three surfaces: One anterior, one medial and one lateral. Due to the vast musculature of the thigh the shaft can not be palpated.[1]

The third trochanter is a bony projection occasionally present on the proximal femur near the superior border of the gluteal tuberosity. When present, it is oblong, rounded, or conical in shape and sometimes continuous with the gluteal ridge.[4] A structure of minor importance in humans, the incidence of the third trochanter varies from 17–72% between ethnic groups and it is frequently reported as more common in females than in males.[5]

The lower extremity of the femur (or distal extremity) is larger than the upper extremity. It is somewhat cuboid in form, but its transverse diameter is greater than its antero-posterior (front to back). It consists of two oblong eminences known as the condyles.[1]

Anteriorly, the condyles are slightly prominent and are separated by a smooth shallow articular depression called the patellar surface. Posteriorly, they project considerably and a deep notch, the Intercondylar fossa of femur, is present between them. The lateral condyle is the more prominent and is the broader both in its antero-posterior and transverse diameters. The medial condyle is the longer and, when the femur is held with its body perpendicular, projects to a lower level. When, however, the femur is in its natural oblique position the lower surfaces of the two condyles lie practically in the same horizontal plane. The condyles are not quite parallel with one another; the long axis of the lateral is almost directly antero-posterior, but that of the medial runs backward and medialward. Their opposed surfaces are small, rough, and concave, and form the walls of the intercondyloid fossa. This fossa is limited above by a ridge, the intercondyloid line, and below by the central part of the posterior margin of the patellar surface. The posterior cruciate ligament of the knee joint is attached to the lower and front part of the medial wall of the fossa and the anterior cruciate ligament to an impression on the upper and back part of its lateral wall.[1]

The articular surface of the lower end of the femur occupies the anterior, inferior, and posterior surfaces of the condyles. Its front part is named the patellar surface and articulates with the patella; it presents a median groove which extends downward to the intercondyloid fossa and two convexities, the lateral of which is broader, more prominent, and extends farther upward than the medial.[1]

Each condyle is surmounted by an elevation, the epicondyle. The medial epicondyle is a large convex eminence to which the tibial collateral ligament of the knee-joint is attached. At its upper part is the adductor tubercle and behind it is a rough impression which gives origin to the medial head of the gastrocnemius. The lateral epicondyle which is smaller and less prominent than the medial, gives attachment to the fibular collateral ligament of the knee-joint.[1]

The femur develops from the limb buds as a result of interactions between the ectoderm and the underlying mesoderm, formation occurs roughly around the fourth week of development.[6]

The femur is the only bone in the thigh, it serves as an attachment point for all the muscles that exert their force over the hip and knee joints. Some biarticular muscles – which cross two joints, like the gastrocnemius and plantaris muscles – also originate from the femur. In all, 22 individual muscles either originate from or insert onto the femur.

A femoral fracture that involves the femoral head, femoral neck or the shaft of the femur immediately below the lesser trochanter may be classified as a hip fracture, especially when associated with osteoporosis. Femur fractures can be managed in a pre-hospital setting with the use of a traction splint.

In primitive tetrapods, the main points of muscle attachment along the femur are the internal trochanter and third trochanter, and a ridge along the ventral surface of the femoral shaft referred to as the adductor crest. The neck of the femur is generally minimal or absent in the most primitive forms, reflecting a simple attachment to the acetabulum. The greater trochanter was present in the extinct archosaurs, as well as in modern birds and mammals, being associated with the loss of the primitive sprawling gait. The lesser trochanter is a unique development of mammals, which lack both the internal and fourth trochanters. The adductor crest is also often absent in mammals or alternatively reduced to a series of creases along the surface of the bone.[8]

Some species of whales,[9] snakes, and other non-walking vertebrates have vestigial femurs.

One of the earliest known vertebrates to have a femur is the eusthenopteron, a prehistoric lobe-finned fish from the Late Devonian period.

Structures analogous to the third trochanter are present in mammals, including some primates.[5]

In invertebrate zoology the name femur appears in arthropodology. The usage is not homologous with that of vertebrate anatomy; the term "femur" simply has been adopted by analogy and refers, where applicable, to the most proximal of (usually) the two longest jointed segments of the legs of the arthropoda. The two basal segments preceding the femur are the coxa and trochanter. This convention is not followed in carcinology but it applies in arachnology and entomology. In myriapodology another segment, the prefemur, connects the trochanter and femur.