From Infogalactic: the planetary knowledge core
Jump to: navigation, search
This article is about the sport. For the boundary structure, see Fence. For other uses, see Fencing (disambiguation).

Contemporary fencing is the word used for modern sport fencing which is very different from the martial use of the sword (also known as western art of combat with the small sword); Sport fencing is also called Olympic fencing which began in the end of the 19th century, with the Italian school having modified the "classical fencing", and the French school having later refined the Italian system.

Modern fencing uses three weapons, and so is divided respectively into three competitive scenes: foil, sabre (spelt "saber" in the United States) and épée. Most (but not all) competitive fencers choose to specialise in one of these only.

Competitive fencing is one of five activities which have been featured in every one of the modern Olympic Games, the other four being Athletics, Cycling, Swimming, and Gymnastics.

Fencing is governed by Fédération Internationale d'Escrime or FIE. Today, its head office is in Lausanne, Switzerland. The FIE is composed of 145 national federations, each of which is recognised by its country's Olympic Committee as the sole representative of Olympic-style fencing in that country.[1]

The FIE maintains the current rules[2] used for FIE sanctioned international events, including world cups, world championships and the Olympic Games. The FIE handles proposals to change the rules the first year after an Olympic year in the annual congress. The US Fencing Association has slightly different rules, but usually adhere to FIE standards. 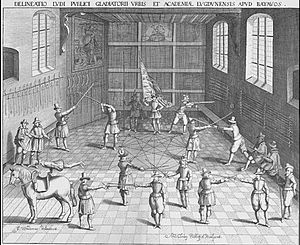 The ancestor of modern fencing originated in Spain, where several books on fencing were written. Treatise on Arms was written by Diego de Valera between 1458 and 1471 and is one of the oldest surviving manuals on western fencing[3] shortly before dueling came under official ban by the Catholic Monarchs. In conquest, the Spanish forces carried fencing around the world, particularly southern Italy, one of the major areas of strife between both nations.[4][5] Fencing was mentioned in the play The Merry Wives of Windsor written sometime prior to 1602.[6][7]

Development into a sport

The shift towards fencing as a sport rather than as military training happened from the mid-18th century, and was led by Domenico Angelo, who established a fencing academy, Angelo's School of Arms, in Carlisle House, Soho, London in 1763.[10] There, he taught the aristocracy the fashionable art of swordsmanship. His school was run by three generations of his family and dominated the art of European fencing for almost a century. [11] 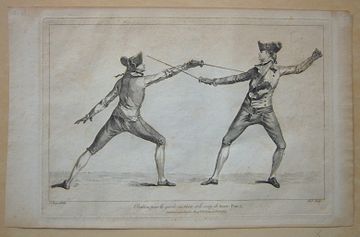 He established the essential rules of posture and footwork that still govern modern sport fencing, although his attacking and parrying methods were still much different from current practice. Although he intended to prepare his students for real combat, he was the first fencing master to emphasize the health and sporting benefits of fencing more than its use as a killing art, particularly in his influential book L’École des armes (The School of Fencing), published in 1763.[11]

The first regularized fencing competition was held at the inaugural Grand Military Tournament and Assault at Arms in 1880, held at the Royal Agricultural Hall, in Islington in June. The Tournament featured a series of competitions between army officers and soldiers. Each bout was fought for five hits and the foils were pointed with black to aid the judges.[12] The Amateur Gymnastic & Fencing Association drew up an official set of fencing regulations in 1896.

Starting with épée in 1933, side judges were replaced by the Laurent-Pagan electrical scoring apparatus,[13] with an audible tone and a red or green light indicating when a touch landed. Foil was automated in 1956, sabre in 1988. The scoring box reduced the bias in judging, and permitted more accurate scoring of faster actions, lighter touches, and more touches to the back and flank than before.[citation needed]

There are three weapons in modern fencing: foil, épée, and sabre. Each weapon has its own rules and strategies. Fencing outfits are made of tough cotton or nylon. Kevlar was added to top level uniform pieces (jacket, breeches, underarm protector, lamé, and the bib of the mask) following the Smirnov incident at the 1982 World Championships in Rome. However, Kevlar breaks down in chlorine and UV light, complicating the cleaning process.

In recent years other ballistic fabrics, such as Dyneema, have been developed that resist puncture and which do not have Kevlar's issues. FIE rules state that the tournament outfits must be made of fabric that resists a force of 800 newtons (180 lbf) and that the mask bib must resist double that amount.

Traditionally, the fencers' uniform is white (black for instructors). This may be due to the occasional pre-electric practice of covering the point of the weapon in dye, soot, or colored chalk in order to make it easier for the referee to determine the placing of the touches. As this is no longer a factor in the electric era, the FIE rules have been relaxed to allow colored uniforms (save black). The guidelines also limit the permitted size and positioning of sponsorship logos.

Techniques or movements in fencing can be divided into two categories: offensive and quickly defensive. Some techniques can fall into both categories (e.g. the beat). Certain techniques are used offensively, with the purpose of landing a hit on your opponent while holding the right of way (foil and sabre). Others are used defensively, to protect against a hit or obtain the right of way.

The attacks and defences may be performed in countless combinations of feet and hand actions. For example, fencer A attacks the arm of fencer B, drawing a high outside parry; fencer B then follows the parry with a high line riposte. Fencer A, expecting that, then makes his own parry by pivoting his blade under fencer B's weapon (from straight out to more or less straight down), putting fencer B's tip off target and fencer A now scoring against the low line by angulating the hand upwards.

Whenever a point is scored, the fencers will go back to their starting mark. The fight will start again after the following sentences have been said by the referee: "En garde" (On guard), "Êtes-vous prêts ?" (Are you ready ?, to which the fencers have to answer yes), "Allez" (Go).

Fencing has a long history with universities and schools for at least 500 years. At least one style of fencing, Mensur in Germany, is practiced only within universities, notably at Heidelberg. University students compete internationally at the World University Games. The United States holds two national level university tournaments including the NCAA championship and the USACFC National Championships[14] tournaments in the USA and the BUCS fencing championships in the United Kingdom.

Equipment costs and the relatively small scale of the sport limits university fencing to a small number of schools. National fencing organisations have set up programmes to encourage more students to fence. Examples include the Regional Youth Circuit program[15] in the USA and the Leon Paul Youth Development series in the UK.

In recent years, attempts have been made to introduce fencing to a wider and younger audience, by using foam and plastic swords, which require much less protective equipment. This makes it much less expensive to provide classes, and thus easier to take fencing to a wider range of schools than traditionally has been the case. There is even a competition series in Scotland – the Plastic-and-Foam Fencing FunLeague[16] – specifically for Primary and early Secondary school-age children using this equipment.

The UK hosts two national competitions in which schools compete against each other directly: the Public Schools Fencing Championship, a competition only open to Independent Schools,[17] and the Scottish Secondary Schools Championships, open to all secondary schools in Scotland. It contains both teams and individual events and is highly anticipated. Schools organise matches directly against one another and school age pupils can compete individually in the British Youth Championships.

Many universities in Ontario, Canada have fencing teams that participate in an annual inter-university competition called the OUA Finals.

Other variants include chair fencing, one-hit épée (one of the five events which constitute modern pentathlon) and the various types of non-Olympic competitive fencing. Chair fencing is similar to wheelchair fencing but for the able bodied. The opponents set up opposing chairs and fence while seated; all the usual rules of fencing are applied. An example of the latter is the American Fencing League (distinct from the United States Fencing Association): the format of competitions is different and the right of way rules are interpreted in a different way. In a number of countries, school and university matches deviate slightly from the FIE format.